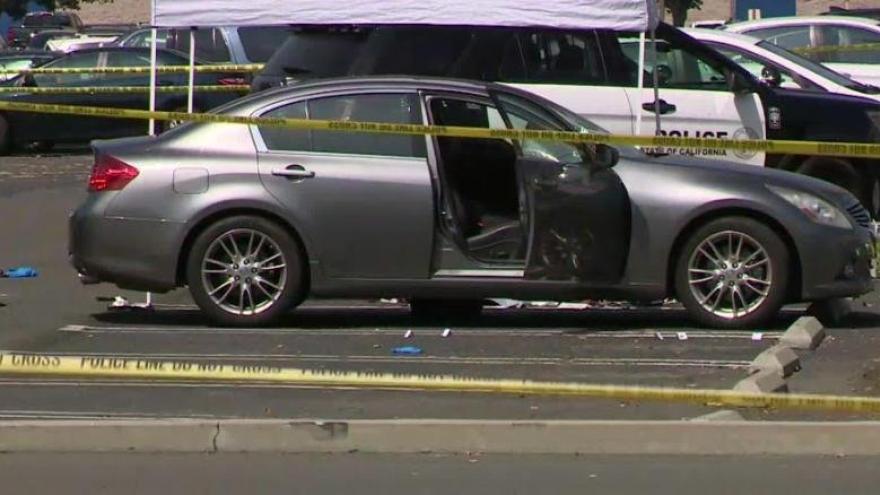 A backpack holding an incendiary device and items that could be used for an abduction were beneath the car in which a retired administrator was found stabbed to death on the campus of California State University Fullerton, authorities said Monday. Source: KCAL/KCBS
By Sarah Moon and Margaret Shuttleworth, CNN

(CNN) -- A manhunt is underway for a suspect who apparently sought out a retired California State University Fullerton administrator and stabbed him to death on campus, authorities said.

A backpack holding an incendiary device and items that could be used for an abduction were found beneath the car in which Steven Shek Keung Chan, 57, of Hacienda Heights, was found stabbed to death, authorities said Monday.

Chan had retired from the school but worked at the international student affairs office as a consultant, officials said.

His body was found Monday morning with multiple stab wounds inside a silver Infiniti sedan in a campus parking lot, police said. He was pronounced dead at the scene.

"Investigators now believe the victim was targeted based on their investigation," Fullerton police said in a statement.

Police are looking for the attacker, described as a man in his mid-20s with black hair, wearing a black shirt and black pants. He was last seen fleeing the scene on foot.

The backpack was left by Chan's assailant, said Fullerton police Lt. Jon Radus. The city's police force is leading the investigation. No motive was disclosed.

The Orange County Sheriff's Department bomb squad found the backpack, Radus said. There is no known threat to the community, he said.

Police were on campus attending an active shooter filming, which was later canceled, police said.

President Fram Virjee called the killing a "tragic and senseless attack," in a letter to the school community.

"He was beloved for his commitment to and passion for both Cal State Fullerton and our Titan Family," Virjee said of Chan.

Chan had retired as a budget director in 2017 and returned early in 2019 to work as a consultant, the letter said.

Monday marked the first day of the 2019-2020 academic year at the university. Classes at the Orange County school start Saturday.