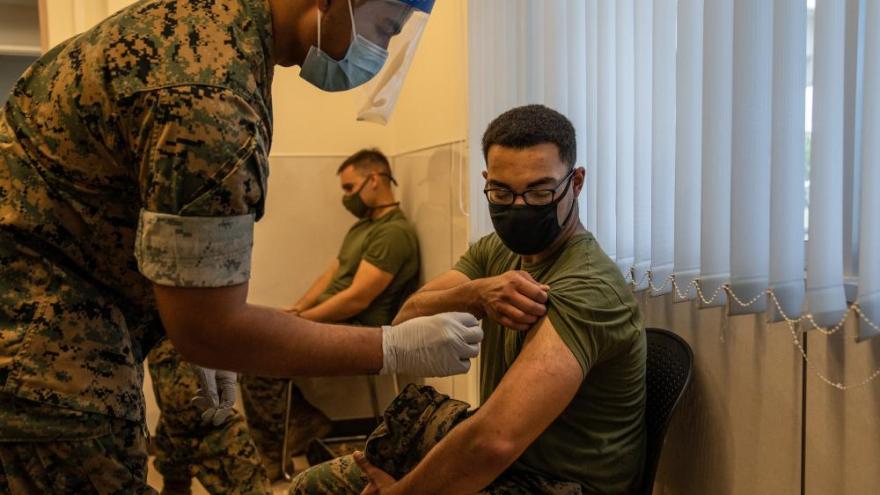 (CNN) -- The Marine Corps has discharged 103 service members for refusing to take the Covid-19 vaccine, as the military begins carrying out enforcement actions for its vaccine mandate.

As of this week, 95% of active duty Marines are vaccinated, according to the latest data from the Marine Corps released Thursday, but the service is still processing exemption requests.

The Air Force on Monday said it had discharged 27 service members for refusing the vaccine, and on Wednesday, the Navy said it would begin discharging service members who refuse to get vaccinated.

Despite the phenomenal success the military has had in vaccinating the armed forces, approximately 35,000 troops remain unvaccinated. That number includes thousands of pending requests, largely for religious exemptions.

The Army, which hit its vaccination deadline on Wednesday, has fully or partially vaccinated 98% of its active duty force, with 3,864 soldier refusals.

Next month, the service will begin involuntarily discharging soldiers who refuse the vaccine without an approved or pending exemption.

Secretary of the Army Christine Wormuth this week said vaccination was "first and foremost" about Army readiness as she thanked vaccinated soldiers and the medical staff who have supported the pandemic response.

"To those who continue to refuse the vaccine and are not pending a final decision on a medical or administrative exemption, I strongly encourage you to get the vaccine. If not, we will begin involuntary separation proceedings," she said in a statement.

The Army has not granted any of the 85 religious exemption requests it has reviewed yet, though there are still 1,661 pending requests. Six active duty leaders, including two battalion commanders, have been relieved of duty, while 2,767 soldiers have received general officer written reprimands for vaccine refusals.

The Army is the largest service in the military, with nearly half a million active duty soldiers.

On Wednesday, the Navy put out its updated guidance that sailors who fail to follow the lawful order to take the vaccine will be separated.

"In order to ensure a fully vaccinated force, US Navy policy is, first, that all Navy service members receive the vaccine as directed and, second, that any who refuse the vaccine be processed for separation at the earliest possible opportunity," said Vice Adm. John B. Nowell, Jr., the chief of naval personnel.

Any sailor who refused the vaccine but changed their mind can remain in the military.