Mark Kelly to be sworn in as US senator, flipping Arizona seat from red to blue 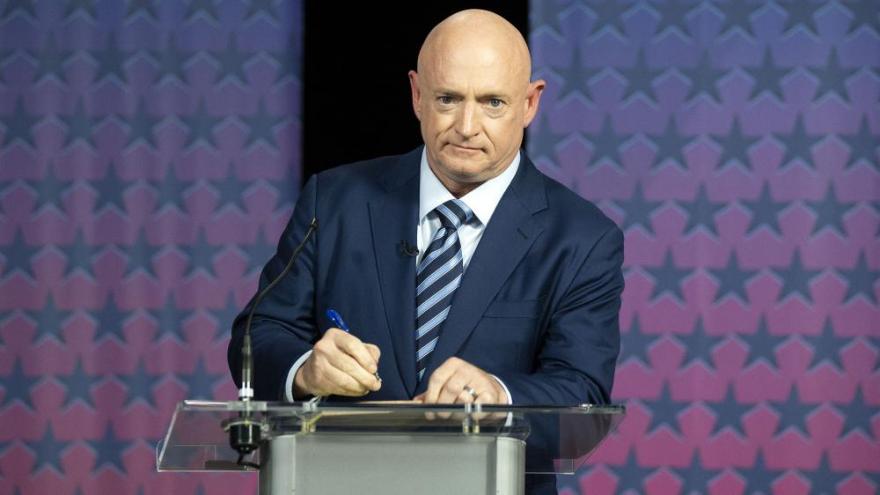 Mark Kelly is seen in October at the Walter Cronkite School of Journalism at Arizona State University in Phoenix.

(CNN) -- Democrats will pick up a Senate seat on Wednesday when former astronaut Mark Kelly is sworn in as a US senator for Arizona after defeating Republican Sen. Martha McSally last month.

While other senators-elect will have to wait until January to be sworn in for the new Congress, Kelly is able to take the oath of office right away since he won a special election. The swearing-in is slated to take place Wednesday afternoon.

Party control of the Senate still has yet to be determined and now hinges on two Georgia runoffs set for January. Securing the seat from Arizona is nevertheless a major victory for Democrats, who had set their sights on it as one of their early top pickup opportunities in 2020.

The special election victory marks a moment of triumph for Kelly, a retired Navy captain and NASA astronaut, that comes in the aftermath of tragedy.

Kelly was thrust into the national spotlight in 2011 when his wife, Arizona's then-US Rep. Gabby Giffords, was shot in the head and nearly killed, an event that sent shock waves throughout the nation.

He later turned into a political activist, launching a group called Americans for Responsible Solutions alongside his wife and fighting for gun control policies like universal background checks and so-called red flag laws.

His entry into politics has marked the start of a new chapter in an already esteemed career.

Kelly flew into space four times, twice as commander of a space shuttle. He and his identical twin, Scott Kelly, who is also an astronaut, participated in a one-of-a-kind "twin study" to see what spaceflight does to the human body.

Mark Kelly is also a retired Navy captain and pilot who flew 39 combat missions in the first Gulf War.

After prevailing over McSally in the special election, he will finish the rest of the late Sen. John McCain's term.

McSally, the Air Force's first female pilot to fly in combat, was appointed to fill the seat after she narrowly lost a race to Democrat Kyrsten Sinema for Arizona's other Senate seat in 2018.

Sending two Democrats to Washington will mark a first in nearly 70 years for Arizona.

Democrats have made inroads in the state long considered a conservative stronghold but which has increasingly become a highly contested battleground. President-elect Joe Biden won the state last month in another major victory for the Democratic Party.

Kelly has said that serving the remainder of McCain's term is deeply significant to him, describing the late senator as someone he looked up to when he was a 22-year-old pilot in flight school.

The incoming senator hopes he will be using McCain's old desk when he gets to Washington.