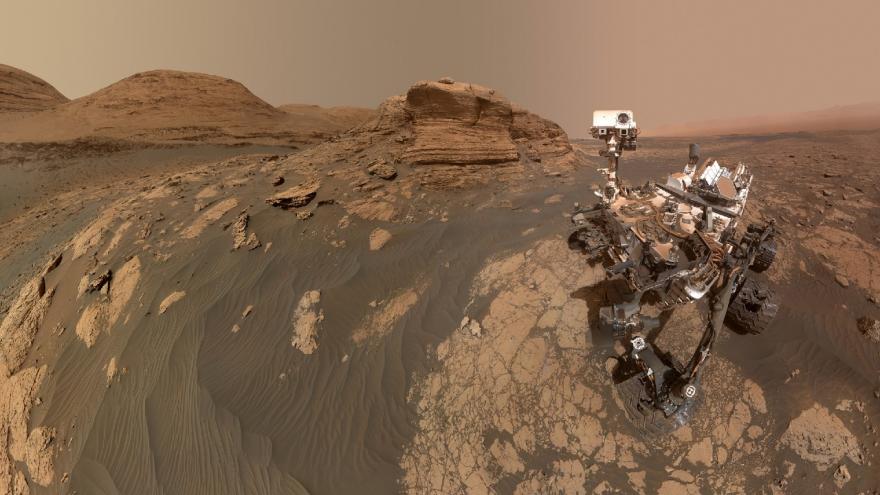 (CNN) -- While the Perseverance rover is testing out its wheels in Jezero Crater before truly beginning its journey on Mars, the Curiosity rover has been busy snapping selfies of an intriguing rock formation.

Perseverance, which landed on February 18, is preparing the Ingenuity helicopter for its first flights on Mars in April. Until Perseverance arrived, Curiosity was the only active rover on Mars.

Perseverance will search for signs of ancient microbial life in the dry lake bed and river delta of Jezero Crater.

Curiosity has been steadily climbing the 3-mile-high Mount Sharp, located at the center of Gale Crater, since 2014.

Earlier this month on March 16 and 26, Curiosity captured 60 images using its robotic arm and 11 images with its Mastcam of a rock formation called "Mont Mercou." This nickname was borrowed from a mountain in southeastern France near the village of Nontron.

The outcrop is 20 feet tall and can be seen to the left of the rover. Curiosity used its drill to capture a sample of rock near the formation, which the scientists dubbed Nontron. It's the 30th sample collected by Curiosity so far.

Orbiters circling Mars have detected a clay mineral called nontronite, which is found close to the actual Nontron on Earth, within this area on Mars.

This area is of particular interest to researchers because it represents a transition in the rocks from a clay-rich area to a sulfate-rich area -- and that might tell scientists what caused Mars to shift from a potentially habitable planet billions of years ago to the frozen desert it is today.

The Curiosity rover also recently looked up to capture an image of clouds on Mars, taken using its right navigation camera.

"What you see here aren't just any clouds, they're Martian clouds. Take a moment out of your day to look at the sky of another world," read a tweet from the Curiosity account.