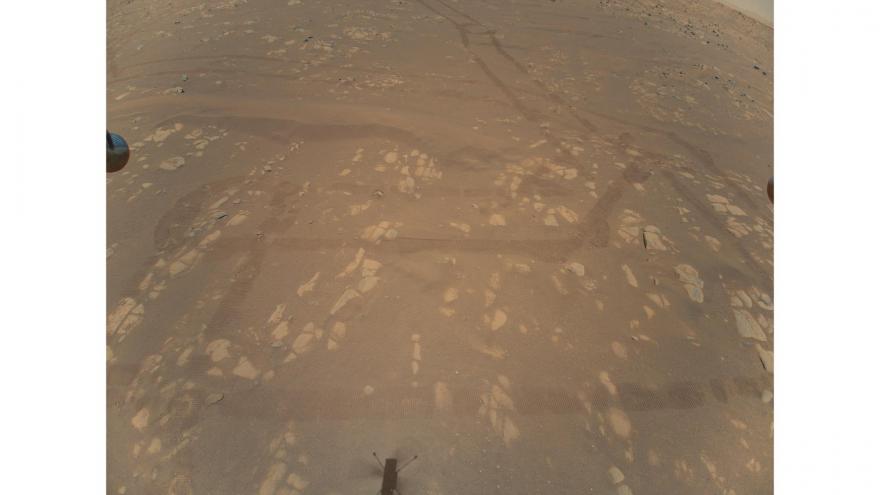 The Ingenuity helicopter captured its first color image from 17 feet above the Martian surface during its second flight on April 22. - JPL-Caltech/NASA

(CNN) -- So this is what the view looks like when flying on Mars.

The Ingenuity helicopter captured its first color image from 17 feet (5.2 meters) above the Martian surface during its second flight on April 22. And now, it's preparing for a third flight, scheduled for Sunday.

Ingenuity autonomously flew for almost 52 seconds during its second flight, climbing 16 feet (4.9 meters) up through the Martian atmosphere. After a brief hover, it tilted at a 5-degree angle and moved sideways for 7 feet (2.1 meters).

The helicopter hovered in place again to make three turns. This allowed Ingenuity's color camera to capture images taken looking in different directions, before the chopper touched back down in the center of the airfield. Ingenuity only collected black-and-white images with its navigation camera during the first flight on April 19.

The color image, shared on Friday by NASA, is the first taken by an aerial vehicle while aloft on Mars. On either side of the image, landings pads from two of the helicopter's four legs can be seen.

The helicopter's shadow on the surface of Mars can be seen at the bottom of the image.

The view from the helicopter's perspective reveals tracks made by the Perseverance rover when it initially had deposited the helicopter in the middle of its 33-foot-by-33-foot (10-meter-by-10-meter) airfield, now known as Wright Brothers Field.

There is also a glimpse of the Martian horizon in the upper-right and left corners of the photo.

The helicopter team believes this image helps demonstrate the unique aerial scouting ability of Ingenuity and other rotorcraft that could be modeled after it in the future.

Ingenuity isn't wasting any time, and the 4-pound helicopter is scheduled to fly again on Sunday morning. Data and imagery will begin streaming into the control room at NASA's Jet Propulsion Laboratory in Pasadena, California, at 10:16 a.m. ET.

Each flight is a little more challenging than the next. For Sunday's flight, the helicopter will climb to the same altitude -- about 16 feet (5 meters) above the Martian surface -- but this time it will increase its speed.

The chopper will also fly 164 feet (50 meters) north before returning to touch down at its landing site.

The mission team is planning for a total flight time of 80 seconds, the longest yet, and a total distance of about 330 feet (100 meters).

"While that number may not seem like a lot, consider that we never moved laterally more than about two-pencil lengths when we flight-tested in the vacuum chamber here on Earth," wrote Håvard Grip, Ingenuity Mars helicopter chief pilot at JPL, in an update.

"And while the 4 meters of lateral movement in Flight Two (2 meters out and then 2 meters back) was great, providing lots of terrific data, it was still only 4 meters. As such, Flight Three is a big step, one in which Ingenuity will begin to experience freedom in the sky."

Ingenuity, a technology demonstration, still has another week to conduct two more flights before the 31-day mission comes to an end.

"Even though we are conducting our flight tests in a tenuous atmosphere over 180 million miles (290 million kilometers) from Earth, we model our methodical approach to experimental flight on the Wright brothers' approach," Grip wrote. "Our plan from Day One has been to prepare like crazy, fly, analyze the data (like crazy), and then plan for an even bolder test in the next flight."

Check back here on Sunday for updates on the Mars Ingenuity helicopter's historic third flight.