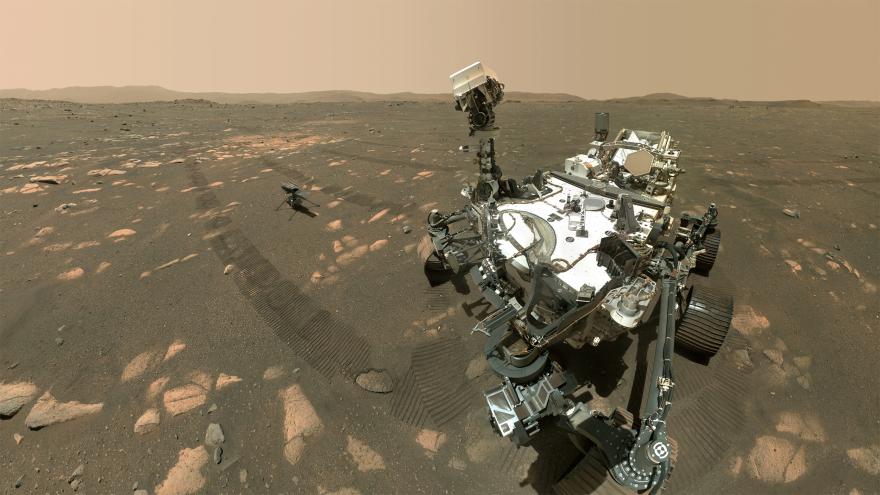 Just days after NASA\'s Perseverance rover gently dropped the Ingenuity helicopter on the surface of Mars, the robot companions took a selfie together on Tuesday and beamed it back to Earth. Mandatory Credit: JPL-Caltech/MSSS/NASA
By Ashley Strickland, CNN

(CNN) -- Just days after NASA's Perseverance rover gently dropped the Ingenuity helicopter on the surface of Mars, the robot companions took a selfie together on Tuesday and beamed it back to Earth.

The rover used its robotic arm, which has a camera mounted on the end, to capture the image. The helicopter can be seen 13 feet (4 meters) away on the left side of the rover.

The camera, known as WATSON, or Wide Angle Topographic Sensor for Operations and eNgineering, functions fittingly as part of the SHERLOC instrument, or Scanning Habitable Environments with Raman and Luminescence for Organics and Chemicals.

The selfie includes 62 individual images that have been stitched together by the mission's team on Earth. There is also an image where the rover can be seen looking back at Ingenuity.

Ingenuity had been stored in Perseverance's belly since before launch. When it separated from the rover on April 3, the helicopter passed a critical milestone: surviving the frigid Martian night without the rover's power supply to keep it warm.

The rover also used the zoomable cameras on its mast to capture a detailed look at Ingenuity sitting on the surface of Mars on April 5.

Ingenuity is equipped with cameras and can take pictures of its own. The 4-pound helicopter has already sent back a small color image of the Martian surface.

April is considered the month of Ingenuity. The first test flight of the helicopter, which will be the first powered, controlled flight on another planet, is scheduled for April 11. If all goes according to plan, NASA will share results from the flight on April 12.

The helicopter team has been putting Ingenuity through tests to make sure it's ready for flight. The researchers will be checking the weather and local wind patterns, using the rover's MEDA instrument, or Mars Environmental Dynamics Analyzer. The rover's weather station can record dust levels, wind speed and direction, pressure, relative humidity, air and ground temperature, and radiation.

"We're very excited to see MEDA working well," said Manuel de la Torre Juárez, deputy principal investigator for MEDA, in a statement. "MEDA's reports will provide a better picture of the environment near the surface. Data from MEDA and other instrument experiments will reveal more pieces of the puzzles on Mars and help prepare for human exploration. We hope that its data will help make our designs stronger and our missions safer."

During the first flight, Ingenuity will fire up its 4-foot blades, lift 10 feet in the air, make a turn and come back down for a landing after 30 seconds.

Hours after the flight, Perseverance will send back data from the helicopter, as well as any images or video the rover captured from a safe distance at a spot overlooking the flat air field where Ingenuity currently sits.

The data and images will help mission teams at NASA's Jet Propulsion Laboratory in Pasadena, California, determine if the first flight was successful.

Ingenuity will conduct up to five flights across a period of 31 Earth days, or 30 sols on Mars. Then, the technology experiment will come to an end. Meanwhile, the Perseverance rover will spend the next two years exploring Jezero Crater, the site of a lake 3.9 billion years ago, in search of ancient microbial life.

Subscribe to CNN's Wonder Theory newsletter: Sign up and explore the universe with weekly news on fascinating discoveries, scientific advancements and more.