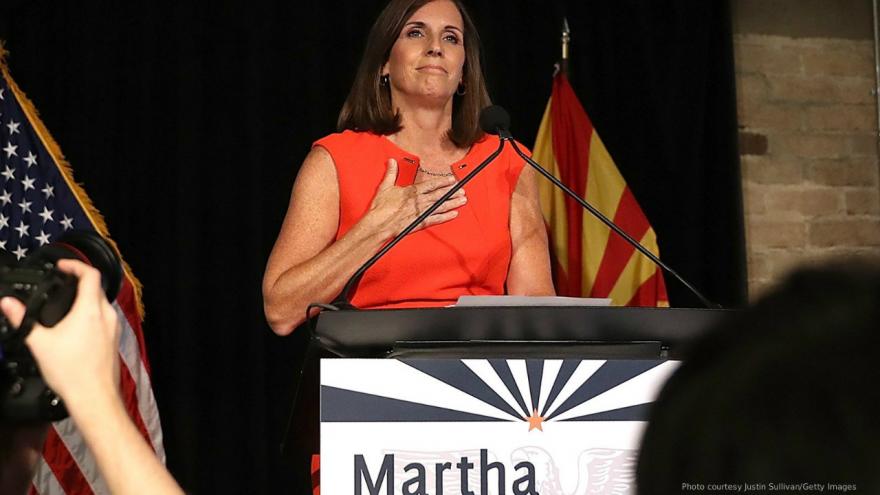 McSally narrowly lost a race this year to Democrat Kyrsten Sinema for Arizona's other Senate seat, which opened after Sen. Jeff Flake opted against seeking re-election.

Instead, McSally will replace GOP Sen. Jon Kyl, who is resigning months after Ducey selected him in September to temporarily fill the seat of former Sen. John McCain, who died in August.

"With her experience and long record of service, Martha is uniquely qualified to step up and fight for Arizona's interests in the U.S. Senate. I thank her for taking on this significant responsibility and look forward to working with her and Senator-Elect Sinema to get positive things done," Ducey said in the statement.

McSally was the preferred choice of Senate Majority Leader Mitch McConnell and other national Republicans who see her resume as the Air Force's first female pilot to fly in combat as the makings of a strong candidate in an increasingly challenging state, where she'll have to run in a special election to keep the job in 2020.

But McSally's loss to Sinema had left some Arizona Republicans skeptical. And her decision to embrace Donald Trump-style rhetoric on issues like immigration, rather than McCain's legacy, had led to resistance to McSally from McCain's camp.

"McSally strikes me as an unwise choice for a number of reasons. She's like an NFL team that plays down to its opponents' level - and she'll be tasked with running for re-election immediately," McCain's son-in-law, Ben Domenech, tweeted last week.

"My husband's greatest legacy was placing service to AZ & USA ahead of his own self-interest. I respect @dougducey's decision to appoint @RepMcSally to fill the remainder of his term. Arizonans will be pulling for her, hoping that she will follow his example of selfless leadership," she said.

Asked about the tensions between McSally and McCain's family, Ducey said he was "happy that Martha and Cindy were able to get together and visit earlier this week and clear the air."

Kyl's resignation is effective December 31, and the new Congress will be sworn in on January 3. Ducey said Sinema will be sworn in first, making her the state's senior senator, followed by McSally. They will be the first women to represent Arizona in the Senate.

Under Arizona law, a special election for the seat will be held at the same time as the next general election -- which means the Arizona seat is likely to be one of the nation's most competitive Senate races during the 2020 presidential election. Then, the seat will be on the ballot again in 2022 for a full six-year term.

After losing to Sinema, it's not yet clear whether McSally will be seen as a strong enough candidate to keep other Republicans from challenging her in a primary. Former McCain aide Grant Woods, gun control advocate Mark Kelly and Rep. Ruben Gallego, are among the potential Democratic candidates.

The Democratic Senatorial Campaign Committee responded to the announcement on Tuesday with an attack on McSally.

"Why appoint a loser when you could find a fresh face with a better shot in 2020?" DSCC spokeswoman Lauren Passalacqua said in a statement. "That's the question that will haunt Governor Ducey and the Washington Republicans who installed Martha McSally to a seat she couldn't earn. McSally was a weak candidate who ran a disrespectful campaign, and lied about her record of voting to gut pre-existing conditions coverage for 2.8 million Arizonans. Voters rejected her once, and will do so again."