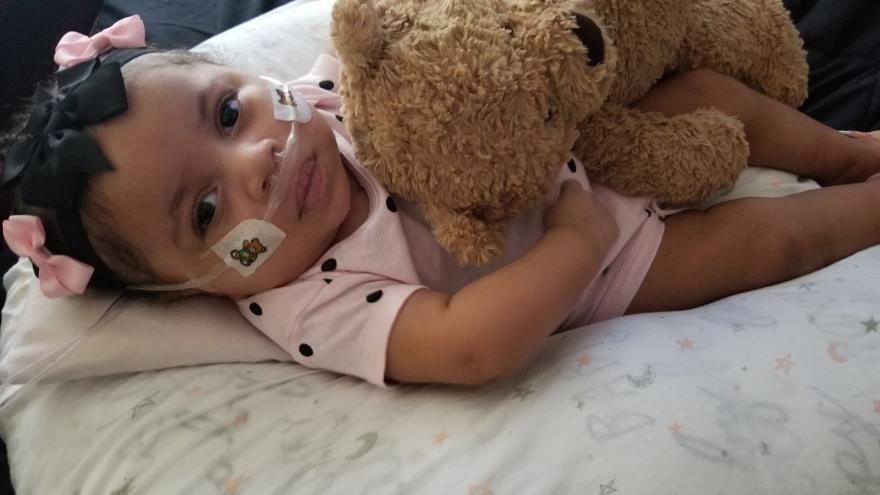 After being taken off life support, Phoenix breathes with the help of a nasal cannula that provides supplemental oxygen. Source: Monique Goldring
By Scottie Andrew and Pete Burn, CNN

(CNN) -- In April, Monique Goldring decided to take her 8-month-old daughter off life support and prepared to say goodbye to her first child.

But the Maryland mother's "miracle baby" survived, and her family is set to celebrate her first birthday August 25.

"I still have my baby with me," she said. "I didn't think I would be able to see that milestone."

Phoenix was born with a heart defect called double outlet right ventricle, which means her heart can't properly circulate oxygen around her body. To save her life, doctors performed two of four palliative surgeries she needs and put a shunt in her heart when she was 2 months old.

At 7 months old, Phoenix started bleeding profusely from her nose. During the drive to the emergency room she turned blue and stopped breathing.

"I knew that she was gone," Goldring remembered.

The sudden cardiac arrest left her daughter with significant brain damage, so she stayed in the hospital on life support for nearly a month. Goldring asked doctors to remove the ventilator that helped Phoenix breathe after seeing how "tired" she was, she said.

She watched and waited for six hours after Phoenix was taken off life support, the time doctors said they expected it would take for her to die. But six hours came and went, and the infant was still fighting, she said.

"From that point on, she just continued to thrive," her mother said.

Phoenix continues to face medical challenges: She was released from the hospital in May on hospice status because doctors said she'd likely die if they performed the remaining surgeries to reroute blood flow. But she'll soon outgrow the shunt in her heart, too, which will be fatal, Goldring said.

"That's kind of hard for a mother (to hear)," she said. "The longer she's here with me, the more difficult it gets for me."

She says she's still hoping a physician will take a chance on her daughter and perform the two surgeries before she gets too big for her current shunt, she said.

Despite Phoenix's odds, Goldring said she's focusing on the tiny milestones she never thought she'd see, such as watching her daughter's first teeth come in.

She still plans to celebrate Phoenix's milestone with typical first-birthday fare -- face painting and tons of food in a house packed with family and friends. At not even a year old, Phoenix has earned many fans, a lot of whom have donated to a GoFundMe page to help with her medical expenses.

"I'm just elated," Goldring said. "I don't know what the future is, but I'm excited for what's to come."