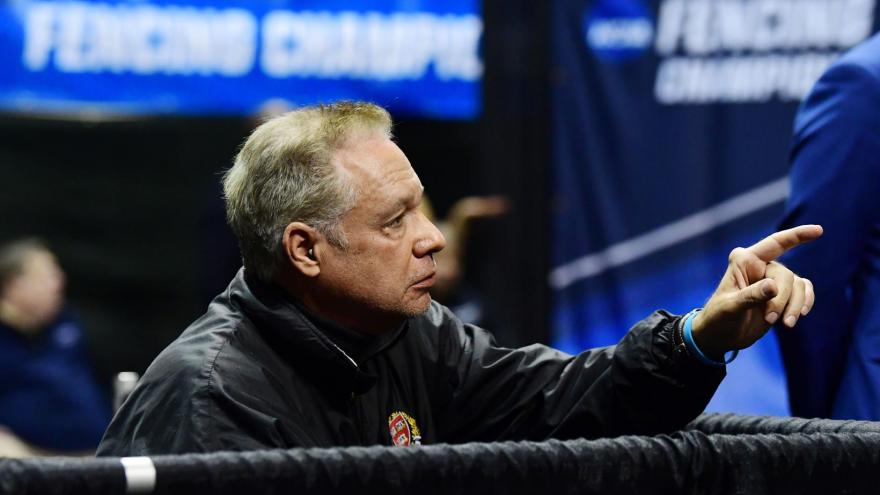 Head coach Peter Brand talks to Veronica Czyzewski of Harvard as she competes against Karolina Cieslar of St. John's in the Saber semi finals during the Division I Women's Fencing Championship held at The Wolstein Center on the Cleveland State University campus on March 24, 2019 in Cleveland, Ohio.

(CNN) -- A Maryland businessman paid Harvard University's former fencing coach at least $1.5 million in bribes, including payments for a car and a house in the suburbs, to get his sons admitted to the Ivy League school, federal prosecutors said in a criminal complaint released Monday.

Jie "Jack" Zhao, 61, and Peter Brand, 67, were arrested Monday and charged with conspiracy to commit federal programs bribery for the alleged agreement, the US Attorney's Office in the District of Massachusetts said.

Zhao, of Potomac, Maryland, is the CEO of telecom company iTalk Global Communications. He was scheduled to appear Monday in federal court in Greenbelt, Maryland.

Brand was Harvard's men's and women's fencing coach from 1999 until last year, when he was fired by the university following an investigation spurred by reporting from The Boston Globe on his suspiciously expensive house sale. He will appear in federal court in Boston on Monday afternoon.

Attorney Douglas Brooks, who represents Brand, told CNN his client "did nothing wrong." When Brand was fired in 2019, Brooks also said Brand had done nothing wrong.

"The students were academic and fencing stars. Coach Brand did nothing wrong in connection with their admission to Harvard. He looks forward to the truth coming out in court," Brooks said in an emailed statement to CNN Monday night.

The arrests are just the latest salvo in the sprawling college admissions scam, first revealed in March 2019, in which rich parents of college applicants used their wealth to cheat on standardized tests, bribe sports coaches and lie about the payments.

"This case is part of our long-standing effort to expose and deter corruption in college admissions," said US Attorney Andrew E. Lelling. "Millions of teenagers strive for college admission every year. We will do our part to make that playing field as level as we possibly can."

An attorney for Zhao denied the charges in an email on Monday.

"Jack Zhao's children were academic stars in high school and internationally competitive fencers who obtained admission to Harvard on their own merit," attorney Bill Weinreb said in a statement. "Both of them fenced for Harvard at the Division One level throughout their college careers. Mr. Zhao adamantly denies these charges and will vigorously contest them in court."

The conspiracy charge comes with a possible sentence of up to five years in prison. Other parents who were charged with similar counts and pleaded guilty, such as actress Lori Loughlin, have generally been sentenced to several months in prison.

How the scheme allegedly worked

College coaches do not explicitly decide who gets accepted into the university, but their recommendations to the admissions office about certain recruited athletes carry powerful influence.

The complaint alleges Zhao made a series of payments totaling $1.5 million to Brand in exchange for the coach recruiting Zhao's two sons to the fencing team, thereby facilitating their acceptance to the prestigious university.

"Jack doesn't need to take me anywhere and his boys don't have to be great fencers," Brand allegedly told a co-conspirator in May 2012, according to the complaint. "All I need is a good incentive to recruit them[.] You can tell him that[.]"

In February 2013, Zhao made a purported donation of $1 million to a fencing charity operated by a co-conspirator, prosecutors say. Zhao's older son was admitted to Harvard as a fencing recruit in December 2013 and matriculated to the university in the fall of 2014, and shortly afterward, the conspirator's fencing charity paid $100,000 to Brand's charitable foundation, prosecutors say.

The older son graduated in 2018, according to The Boston Globe.

As Brand recruited Zhao's younger son, the businessman made a series of payments to Brand or for his personal benefit, prosecutors say. Zhao allegedly paid for Brand's car, made college tuition payments for Brand's son, paid the mortgage on Brand's house in Needham, Massachusetts, and then bought the house for well above market value, prosecutors say.

The payments allowed Brand to buy a more expensive residence in nearby Cambridge that Zhao then paid to renovate, the complaint states. Zhao's younger son began attending Harvard in 2017, and the complaint alleges Brand did not tell the university about the payments when recruiting the sons.

The Needham house payment drew particular attention from Harvard and federal investigators. Brand sold the home to Zhao for $989,500, according to the deed, almost twice what a tax document said it was worth. Zhao then sold the Needham property about 17 months later at a loss of over $300,000.

Following the sale of his Needham home, Brand purchased a condominium in Cambridge. Documents obtained by CNN show the Cambridge property was originally listed for $989,000 -- just $500 less than what Zhao paid the Needham home. Brand bought the Cambridge condo for about $300,000 over the asking price.