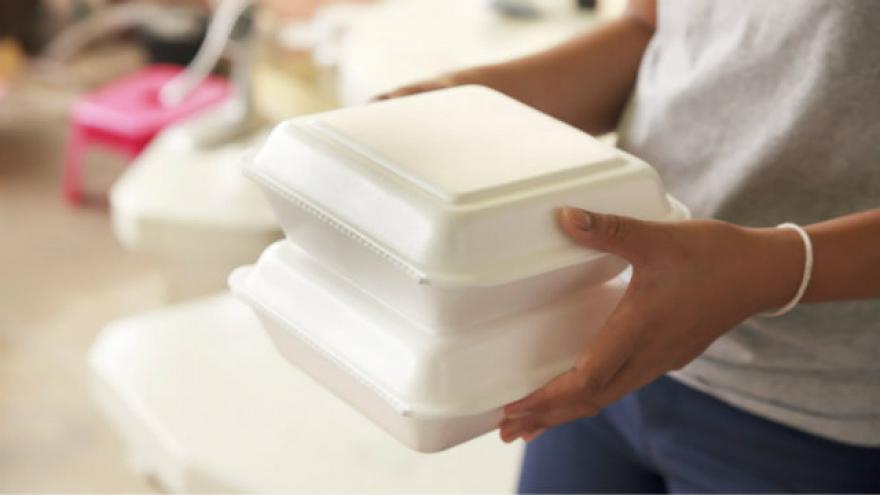 (CNN) -- Maryland is well on its way to becoming the first state to ban foam.

The Legislature has approved bills to ban polystyrene -- commonly known as plastic foam -- cups and food containers. If a final measure is passed and the governor signs it, Maryland would be the first state to implement such a ban, environmental group Natural Resources Defense Council says.

Democratic Delegate Brooke Lierman is the primary sponsor of the House bill. She said banning foam products is the first step to curbing people's reliance on single-use plastics.

"Single-use plastics are overrunning our oceans and bays and neighborhoods," Lierman told CNN. "We need to take dramatic steps to start stemming our use and reliance on them ... to leave future generations a planet full of wildlife and green space."

Lierman proposed the bill twice before but says she believes public opinion has now shifted to recognize the problem with plastic.

"We see plastics in our neighborhoods, in our riverbeds and streams -- it is ubiquitous," Lierman said. "We've seen major companies like Dunkin' Donuts say they're going to phase out" the foam.

A conference committee will work to resolve discrepancies between the House and Senate versions of the bill. Lierman said she expects the negotiations to go smoothly, saying there are "no real substantive differences."

However, it's unclear whether Republican Gov. Larry Hogan will sign the bill.

A spokeswoman for his office said Hogan is "always willing to consider any piece of legislation that reaches his desk."

"Not only will costs go up for restaurants and be passed onto consumers, but because comparable products weigh more and many cannot be recycled, costs will increase due to higher tipping fees (based on weight) at landfills," Locklair Tolle said.

The American Chemistry Council, the trade association of chemical manufacturers, voiced opposition to the legislation.

"Polystyrene foam packaging and containers provide business owners and consumers with a cost-effective and environmentally preferable choice that is ideal for protecting food and preventing food waste, particularly when used for food service. Foam packaging is generally more than 90 percent air and has a lighter environmental impact than alternatives," the council said in a statement.

Foam is difficult to clean up

Lierman said plastic foam "is probably the most insidious form of single-use plastics."

Foam also absorbs toxins faster than other plastics and is mistaken for food by marine life, Van Stone said. And the toxins that wildlife consumes makes its way up the food chain into people.

Van Stone, who worked with lawmakers to pass the foam ban legislation, said it would be only the first step.

"We know that banning one material is not going to stop and eradicate all litter. But by banning foam we can work to ensure that the material is reduced from entering our environment," Van Stone said.