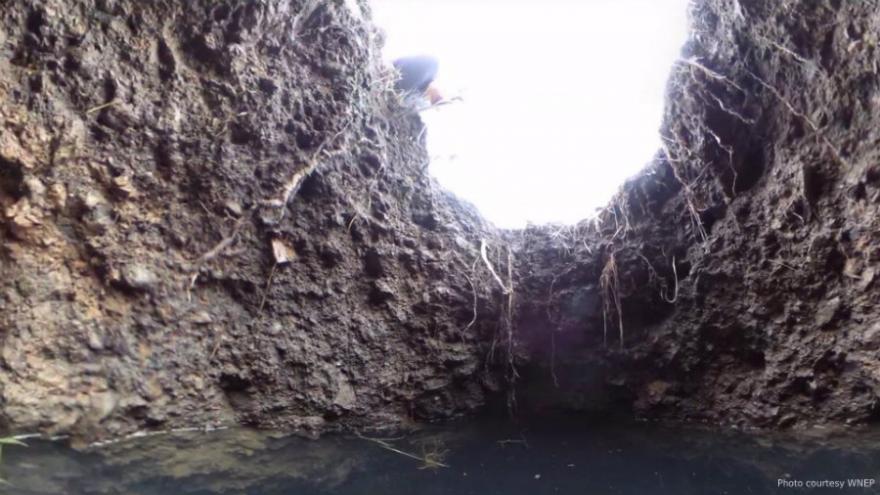 The huge sinkhole developed at the Minersville Little League complex near a popular walking path and set of bleachers.

Even though the state is saying it's just a sinkhole, people who live in the area are skeptical given the borough's mining history.

"I looked and I thought, 'Holy crow! There's a massive hole right there.' I walked over, looked down and thought, 'Wow, that is this thing,'" said borough manager Robert Mahalchick.

On August 27, a man mowing the grass at the complex discovered this monstrous hole. Because of all the rain we've seen this summer, it's gotten bigger and bigger. That's led people in the area to question if the hole is mine-related.

"That's very possible because there's a lot of them around here, a lot of them. In fact, most of the football stadium, it's underground there," Harold Brinsfield said.

According to the Bureau of Abandoned Mine Reclamation, it's just a sinkhole. Its maps show there was no mining in this particular area.

But Minersville was known to have some bootleg mines and if you look closely, there appears to be some type of structure in the hole.

"Back in the day, I think a lot of people know there was a lot of bootleg mines and everything else going on that necessarily won't be showing on maps. But, at the end of the day, I guess we have to go with what the officials from the state say," Mahalchick said.

The Department of Environmental Protection says the hole is 3 feet by 3 feet and goes 17 feet down.

"(It's a) well-traveled area with sports, with young kids. We have a walking path here. It's heavily used, so the number one priority is the safety of our residents."

The borough plans to fill the sinkhole early next week with a combination of stone, concrete, and soil, and then top it with grass. The borough is also looking for any local historian out there who may be familiar with mining in the area to see if the hole is, in fact, mine-related.