Mastodon skeleton reassembly gets underway at U. of Michigan 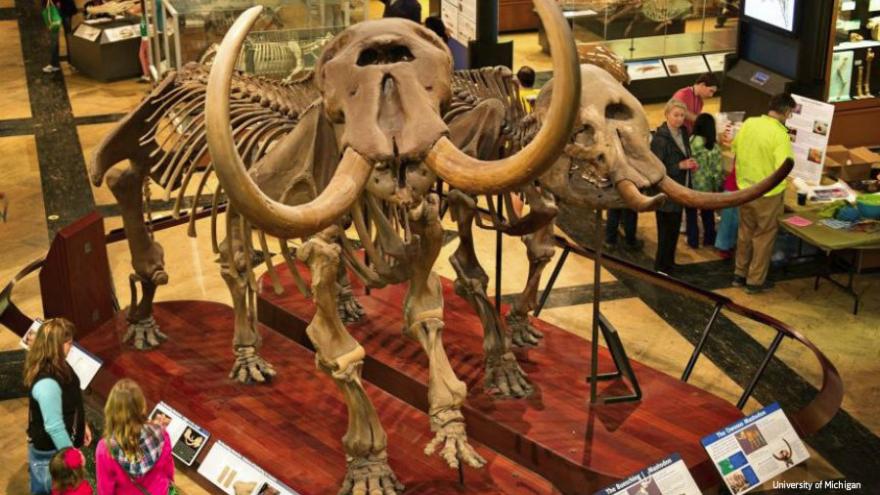 ANN ARBOR, Mich. (AP) — Remains of a mastodon that perished millennia ago are being put back together at the University of Michigan.

The skeleton of the 11,000-year-old female Owosso mastodon was taken apart this spring after standing inside the Ann Arbor school's natural history museum since 1947. Crews began reassembling her bones this week inside the new Biological Sciences Building next door to the museum.

The ancient, elephant-like mammal eventually will stand beside a cast of the male Buesching mastodon that was found near Fort Wayne, Indiana. Both will be positioned in the five-story atrium of the U-M Museum of Natural History, which opens to the public in April.

"To my knowledge, there's no other exhibit anywhere in the world that shows an adult male and adult female mastodon together. So this is a very unusual exhibit in that sense," said Daniel Fisher, the lead University of Michigan paleontologist on the mastodon exhibit.

The Buesching mastodon is being displayed as if it is in motion, complete with track marks trailing it. The tracks are replicas of ones that were discovered in nearby Saline, Michigan.

Meanwhile, Fisher said the Owosso will be placed in a standing position, one that is more biomechanically accurate than the way in which it was displayed at the former museum. At the time of its original placement, just a couple of years after the end of World War II, the understanding of mastodons was not as advanced as it is today.

"When people come in here, you not only have this amazing mastodon couple, you have them with the whales and then you have this five-story atrium with all of the light," Museum project manager Lynne Friman said, referencing the prehistoric whales that are suspended above the mastodons.

The work on remounting both mastodons is being carried out by members of Research Casting International, who proudly wear their "Skeleton Crew" T-shirts while on site. They are expected to have both mastodons moved into their new home within a few days.

"It's a lot easier to dismount them than to remount them," a laughing Fisher said, adding: "Destruction is easy."