James Mattis: 'We are witnessing the consequences of three years without mature leadership' 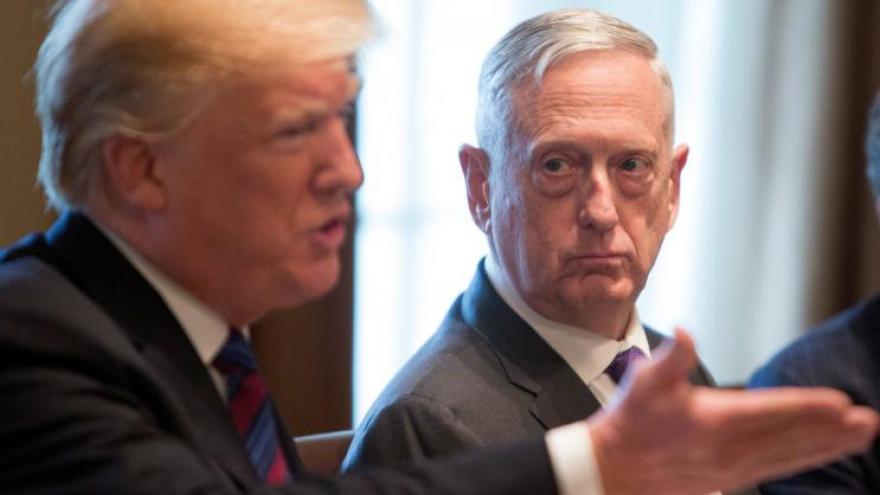 Former Secretary of Defense James Mattis castigated President Donald Trump as "the first president in my lifetime who does not try to unite the American people" in a forceful rebuke of his former boss.

(CNN) -- Former Secretary of Defense James Mattis on Wednesday castigated President Donald Trump as "the first president in my lifetime who does not try to unite the American people" in a forceful rebuke of his former boss as nationwide protests have intensified over the death of George Floyd.

"Donald Trump is the first president in my lifetime who does not try to unite the American people—does not even pretend to try. Instead he tries to divide us," Mattis said in a statement obtained by CNN.

His pointed remarks follow more than a week of nationwide protests across the country calling for justice for Floyd, a black man who was killed last week by a white police officer in Minneapolis. In response, Trump earlier this week declared himself "your president of law and order" and vowed to return order to American streets using the military if widespread violence isn't quelled.

The comments from Mattis are a significant moment for a man who has kept mostly silent since leaving the administration. The retired Marine general had been pressed many times to comment on Trump, troop policies, the Pentagon, and other current events and had always refused because he didn't want to get involved and be a contradictory voice to the troops. Instead, Mattis always insisted he had said everything he wanted to say in his resignation letter.

And until a few days ago he had privately held to that view, but Mattis has become so distressed by the events of the last week that his views on speaking out changed.

The remarks will be a significant moment for many service members who idolize the former defense secretary, who -- despite a career based on loyalty and respect for the military chain-of-command -- is sending troops the message that the country can unite without the President's lead.

The President responded to Mattis in a series of tweets Wednesday night.

"Probably the only thing Barack Obama and I have in common is that we both had the honor of firing Jim Mattis, the world's most overrated General. I asked for his letter of resignation, & felt great about. His nickname was 'Chaos', which I didn't like, & changed it to 'Mad Dog,' " Trump said on Twitter.

"His primary strength was not military, but rather personal public relations. I gave him a new life, things to do, and battles to win, but he seldom 'brought home the bacon'. I didn't like his 'leadership' style or much else about him, and many others agree. Glad he is gone!"

"Trump loved calling them 'his generals,'" the adviser said.

"He loved his generals and now they've all turned on him," the adviser added.

The adviser went on to note the Nazi reference in the statement -- Mattis said, "The Nazi slogan for destroying us...was 'Divide and Conquer.' Our American answer is 'In Union there is Strength.' We must summon that unity to surmount this crisis—confident that we are better than our politics" -- was particularly pointed. "That will leave a mark," the adviser said.

The message comes after days of increased military presence in Washington. National Guardsmen and federal law enforcement have been stationed around the nation's capital in a show of force not seen in recent memory. Federal law enforcement officers violently broke up peaceful protests in front of the White House on Monday, apparently so Trump could stage a photo-op at a church across the street from Lafayette Square, where protesters had gathered.

The former secretary, who resigned from Trump's Cabinet, also indirectly criticized current Defense Secretary Mark Esper's use of the word "battlespace" in reference to American cities.

"We must reject any thinking of our cities as a 'battlespace' that our uniformed military is called upon to 'dominate,'" Mattis said. "At home, we should use our military only when requested to do so, on very rare occasions, by state governors. Militarizing our response, as we witnessed in Washington, D.C., sets up a conflict—a false conflict—between the military and civilian society."

"It erodes the moral ground that ensures a trusted bond between men and women in uniform and the society they are sworn to protect, and of which they themselves are a part. Keeping public order rests with civilian state and local leaders who best understand their communities and are answerable to them."

His comments echo a growing discomfort from some in the Pentagon that began even before Trump announced that he is ready to deploy the military to enforce order inside the US.

"There is an intense desire for local law enforcement to be in charge," a defense official told CNN, alluding to the laws that forbid the military from performing law enforcement roles inside the United States.

Esper on Wednesday acknowledged his use of the word "battlespace" was not meant to indicate any conflict with Americans, but claimed he used a military term of art. Esper also specifically rejected the use of active duty forces in a law enforcement role at this time -- comments that put him on shaky ground with the White House.

White House press secretary Kayleigh McEnany would not directly answer Wednesday whether Trump still has confidence in Esper, saying instead, "as of right now Secretary Esper is still Secretary Esper."

"With regard to whether the President has confidence, I would say if he loses confidence in Secretary Esper, I'm sure you all will be the first to know," McEnany said during Wednesday's press briefing.

"Should the President lose faith, we will all learn about that in the future," she added.

But Mattis directed most of ire at Trump saying "Never did I dream that troops taking that same oath would be ordered under any circumstance to violate the Constitutional rights of their fellow citizens—much less to provide a bizarre photo op for the elected commander-in-chief, with military leadership standing alongside."

Trump on Wednesday evening softened his tone around sending the military into American cities, saying, "I don't think we'll have to," before reiterating that he has "very strong powers to do it" in an interview with his former press secretary Sean Spicer.

Still, Mattis made clear that his blistering assessment of the President extends beyond any one issue.

"Only by adopting a new path—which means, in truth, returning to the original path of our founding ideals—will we again be a country admired and respected at home and abroad."