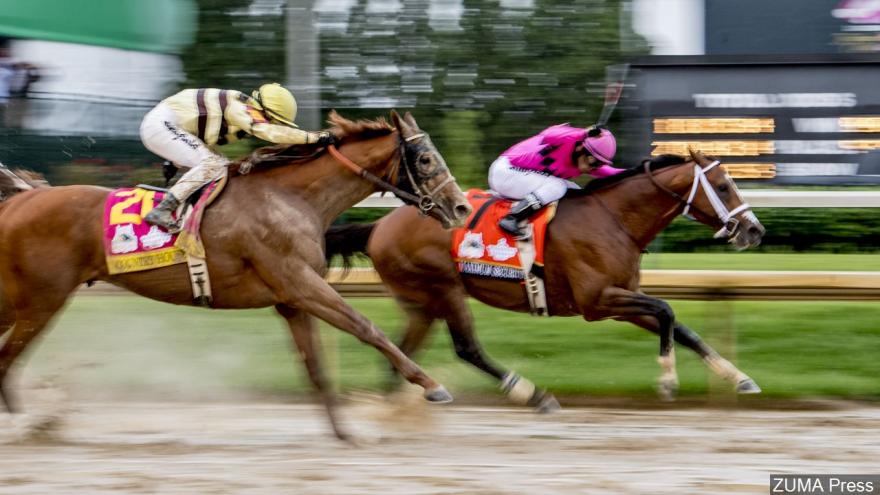 (CNN) -- Jockey Luis Saez was disqualified for a rules infraction while riding Maximum Security in the Kentucky Derby.

Now he has been suspended by racing stewards for 15 racing days, according to a document on the Kentucky Horse Racing Commission website.

Saez was suspended "for failure to control his mount and make the proper effort to maintain a straight course thereby causing interference with several rivals that resulted in the disqualification of his mount," says the letter dated Sunday. The dates of his suspension are May 23-27, May 30-June 2, June 6-9 and June 13-14.

Sean Deskins, an attorney for the jockey, told CNN that Saez plans to file an appeal, which must be done within 10 days.

Maximum Security led the Kentucky Derby on May 4 from wire to wire and crossed the finish line 1 3/4 lengths ahead of Country House but was disqualified for interference while turning for home. Racing stewards decided that Maximum Security impacted the progress of War of Will, which in turn interfered with Long Range Toddy and Bodexpress. Country House was declared the winner.

Barry Stilz, an attorney for Maximum Security's owner, Gary West, had no comment Monday on Saez's suspension. Stilz previously told CNN they intend to seek additional legal options after an appeal was denied May 6 by the Kentucky Horse Racing Commission.

Neither Maximum Security or Country House will race in the Preakness Stakes, which is Saturday in Baltimore.