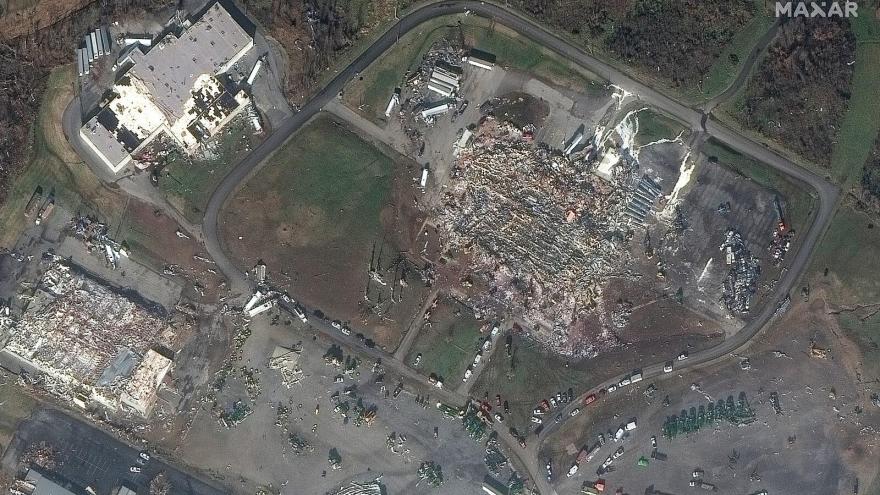 The candle factory in Mayfield, Kentucky, was destroyed by a tornado.

(CNN) -- The Mayfield, Kentucky, candle factory leveled by a tornado last month is shutting down and 251 employees are being laid off, a company official said.

More than 100 people were working at the Mayfield Consumer Products (MCP) factory on December 10 when the tornado hit, killing eight people and making it one of the most devastated sites in an outbreak of at least 30 tornadoes across six states in the Midwest and South.

The facility had been "going 24/7" in part to meet Christmastime candle demand, US Rep. James Comer, who represents the area, told CNN at the time.

In a letter this week to Kentucky's Office of Employer and Apprenticeship Services, the candle factory plant manager said that the company, "has determined that because of the recent devastating tornado ... it can no longer continue to operate."

"Although it can no longer operate in Mayfield, please know that MCP plans to continue much of its operation in Kentucky," the letter continues.

The company plans to transfer some of the affected employees to another location about 10 miles away, but it can't relocate everyone, the letter said.

"Those employees not offered a transfer to the new facility will be laid off," the letter reads.

A total of 501 people worked at the candle factory, and 250 of those jobs are being transferred, according to the letter. The rest of the workers are being laid off, the letter said.

First responders rushed to the factory to help with rescue efforts after the tornado. They set up lights, and people trapped inside the debris began calling for help and telling rescuers their location, Graves County commissioner Todd Hayden previously told CNN.

Many rescuers climbed inside to find survivors, while Hayden and others stayed on the outside to help people climb out of the rubble.

Gov. Andy Beshear said the storm, which killed at least 70 people in the state, was the "most severe tornado event in Kentucky's history."

A class-action lawsuit was filed against the company last month on behalf of candle factory workers alleging they were told they would be fired if they left work ahead of the deadly tornadoes.

The lawsuit is based on the Kentucky equivalent of the federal Occupational Safety and Health Administration, or OSHA, statute, said Amos Jones, the Washington, DC-based attorney who is representing some of the workers. The complainants are seeking an "unspecified amount" in financial compensation, he told CNN.

Mayfield Consumer Products did not respond to CNN's request for comment about the lawsuit. A spokesperson for the company that owns the factory previously said the company had spoken with supervisors working that night, who all denied any employees were told they'd be fired if they left.