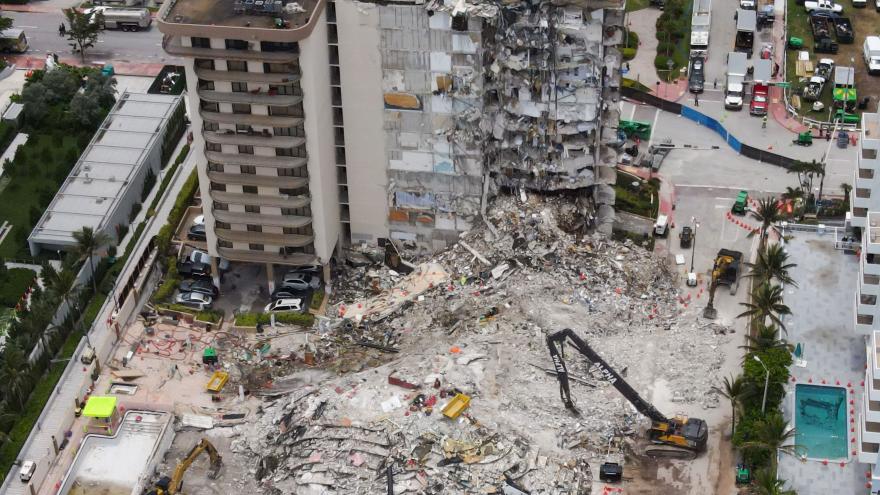 An aerial view of the site is shown during a rescue operation of the Champlain Tower partially collapsed in Surfside, Florida. - Tayfun Coskun/Anadolu Agency/Getty Images

(CNN) -- The mayor of Miami-Dade County took another step Friday toward allowing crews to demolish the remaining units at the Surfside condo building that partially collapsed last week, but she added that it will be weeks before it can happen.

Mayor Daniella Levine Cava said officials are still evaluating the possible impacts on the existing rubble and determining the best timeline to begin the demolition.

"The demolition of the building is going to proceed based on the recommendations of the engineers," she said. "It's going to take, most likely, weeks."

She said signing an emergency order now allowing the demolition would help the process move quickly once officials decide how and when the rest of the building should come down.

The mayor was asked whether authorities would wait until every body was recovered before beginning demolition.

"We're very concerned to not compromise our search. But we also know that the building itself poses certain risks, so we have to balance those things," she said.

Levine Cava also told reporters that two more bodies were recovered Friday from the rubble. The death toll from the collapse is now 22, with 126 people unaccounted for, she said.

During a morning news conference officials said search and rescue teams had on Thursday night found the body of the 7-year-old daughter of a Miami firefighter and one other victim.

Search teams that have been combing through concrete up to 16 feet deep are facing new challenges, with the remainder of the building unstable and a hurricane headed in Florida's direction.

About 55 of the building's 136 units pancaked to the ground June 24 when the deadly collapse shook the neighborhood just north of Miami Beach.

State Fire Marshal Jimmy Patronis said of the remaining condo units: "To finish the mission, the building will have to go. It's just too much of a risk."

The state is working on a "dual track" with the collapse site and Hurricane Elsa potentially hitting South Florida in coming days, Gov. Ron DeSantis said.

"Our Department of Emergency Management is assuming that that will happen and making the necessary preparations to be able obviously to protect a lot of the equipment. You could potentially have an event out with the building, as well," he said.

Meantime, the latest death of a child found in the rubble was confirmed by the Miami Department of Fire and Rescue.

"Our hearts and prayers are with the families affected by this horrific tragedy. We can confirm that a member of our City of Miami Fire Department family has lost his 7-year-old daughter in the collapse," Fire Chief Joseph Zahralban said in a statement.

The girl was "recovered last night by members of our Urban Search and Rescue Team, Florida Task Force 2," the statement says.

The girl's father did not find her body; other team members alerted him, officials said.

Officials on Friday released the names of three people -- Bonnie Epstein, 56; Claudio Bonnefoy, 85 and Maria Obias-Bonnefoy, 69 -- whose bodies were recovered in the past two days but didn't identify the girl at the request of the family.

Concerns about the integrity of what's still standing could add another level of difficulty to the painstaking recovery efforts.

Work was halted for about 15 hours Thursday as engineers assessed the remaining structure.

The county could face heavy rainfall and strong winds from what is now Hurricane Elsa in the Caribbean. Levine Cava said, "it's too early to know for sure that we are in danger" from Hurricane Elsa, "but nonetheless we have to prepare."

Hurricane Elsa is moving through the Caribbean at a swift 30 mph.

The amount of time the storm's center spends over Hispaniola, Jamaica, and Cuba will have a tremendous impact of the strength of the storm as it approaches Florida on Monday. For now, the National Hurricane Center anticipates Elsa will weaken to a tropical storm, but they note that the uncertainty with Elsa is higher than most storms.

"Nearly the entire state remains in the cone of uncertainty as Elsa could skim up the east coast, west coast, or over the Keys and directly up the peninsula," CNN Meteorologist Taylor Ward said.

Repairs to the Champlain Towers South as part of a 40-year-recertification process had just begun when the collapse happened.

In 2018, structural engineering firm Morabito Consultants found that, among other things, failed waterproofing was causing "major structural damage" to a concrete slab beneath the pool deck. The report didn't indicate the structure was at risk of collapse.

Condo owners in Champlain Towers South were facing assessments for $15 million worth of repairs -- and payments were set to begin this week.

In an October letter, the Morabito firm wrote it feared the work might affect the stability of "the remaining adjacent concrete constructions." It's unclear if the firm meant nearby buildings or other structures within Champlain Towers South.

And repairs were needed inside the pool, which was supposed to stay open while work was done, the letter shows.

Morabito noted that full restoration and repair work on the pool corbel and wall repair work in the pool pump room could not be performed, stating in the letter that "areas of deteriorated concrete appeared to penetrate deep into wall/corbel construction" and that "aggressive excavation of concrete at the severely deteriorated pool corbel could affect the stability of the remaining adjacent concrete constructions."

Loose concrete around the perimeter of the pool pump room that showed signs of cracking, spalling, deterioration and presented a "fall hazard" was removed by Concrete Protection & Restoration Inc. (CPR), according to the work summary.

Nothing indicates the concrete deterioration contributed to the collapse, but it highlights major repair work that was needed.

The full scope of the concrete work is unclear, as is the specific work contracted to Morabito Consultants and CPR and whether that work had been scheduled or was in the process of being completed.

The existence of this letter and details of the work performed were first reported by USA Today.

In a statement Friday, CPR said it did not repair or restore concrete in 2020 on Champlain Towers South.

Morabito did not respond to CNN's request for comment on the letter, but it has defended its work at the tower in previous statements.

A lawsuit against the Champlain Towers South condo association alleges Morabito Consultants did not do enough to keep occupants safe and failed to examine the building's subsurface foundation.

The suit was filed by the family of Harold Rosenberg, who remains unaccounted for. It alleges that after the 2018 report, the condo association and Morabito Consultants should have submitted a written report to Surfside certifying that the condo was structurally safe.

The report was conducted by engineer Frank Morabito as part of the Champlain Towers South's 40-year recertification effort.

The 2018 report "offered detailed findings and recommendations regarding extensive and necessary structural repairs for the condo building," a Morabito Consultants spokesperson told CNN.

Other buildings to be evaluated

Teams going through the debris have still not yet found a single trigger for the collapse. And as investigators look into what caused the devastation, city officials are working to prevent damage elsewhere.

Surfside has requested that buildings at least three stories high or 30 years old begin to have structures examined before the 40-year building recertification program, a letter to property owners said Thursday.