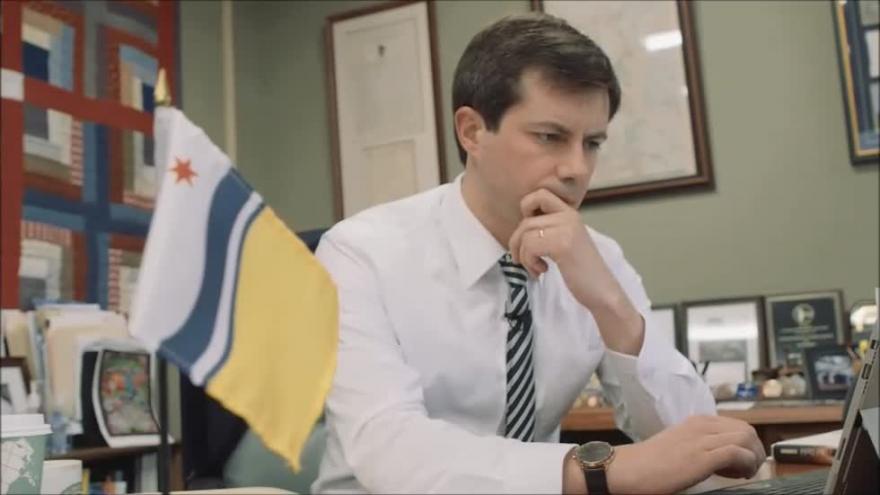 (CNN) -- Over the last month, the 2020 race for the Democratic presidential nomination feels as though it has begun in earnest.

And the past month has seen a star emerge in the race in the form of South Bend, Indiana, Mayor Pete Buttigieg.

We contemplated including Mayor Pete at No. 10 in our rankings last month, but decided against it because he was still a) almost totally unknown and b) had limited prospects for raising the millions of dollars he would need to get better known in such a crowded field.

Buttigieg -- powered by a series of strong performances in national TV interviews as well as several viral moments (speaking Norwegian, talking about his marriage to husband Chasten) -- has rocketed to the edge of the top tier in this month's rankings. And it's not just buzz, which, last time we checked, doesn't pay for staff or TV ads in Iowa. It's real money, too: Buttigieg raked in more than $7 million in the first three months of the year, eclipsing the likes of Elizabeth Warren, Cory Booker and Amy Klobuchar in the process.

Can he keep it up? That remains to be seen -- and that's a big "remains to be seen," given that no one actually votes for almost another year. Still better to have a moment than never get one at all.

Below, our April rankings. But before we get to that: a bit of news. Because the 2020 race is moving so quickly -- and there is so much attention being paid to it already -- we will be doing these rankings twice as often going forward. Every two weeks, we'll be out with new lists of the 10 candidates most likely to wind up across from President Donald Trump on a debate stage in the fall of 2020. Stay tuned!

The Democratic field looks like it will be the largest one in modern history. In order to stand a chance, long-shot candidates need to be able to differentiate themselves in some way. Castro, a former mayor of San Antonio and member of the Obama administration, has decided to take up the mantle of voting rights. He also is from Texas and can make the argument that he can take the fight over the immigration right to Trump better than most. The problem for him is that right now, Beto O'Rourke can make that claim too. If he makes it out of the early states, Castro's Latino heritage may help him in primary states where Latinos make up a significant portion of voters. For now, though, he is stuck at 1% in Iowa. (Previous ranking: 8)

Gillibrand was solid if not spectacular in her CNN town hall appearance on Tuesday night. She spent a significant chunk of time apologizing for her record on guns and immigration as a member of the House, a record that is much more conservative than how she has voted since coming to the Senate and deciding to run for president. Still, she came across as knowledgeable on policy and aggressive in painting Trump as a "coward." Gillibrand, for the moment, seems content to sit back in the pack, waiting to make her move until later this year. (Previous ranking: 9)

If primaries were decided by policy papers, the senior senator from Massachusetts would be an automatic top-tier candidate. Warren additionally can be quite good in front of the camera. The question for her is whether she can translate those skills to the polls. So far, she hasn't. Despite having high name recognition, Warren is running about even with the far-less-known Buttigieg. She raised $6 million in the first quarter, a somewhat disappointing total given her national donor base from past Senate campaigns. And in perhaps the ultimate blow, she's even trailing Joe Biden and Bernie Sanders in her home state. Don't count Warren out yet, though. She may be a better candidate as a scrappy underdog than as a front-runner. (Previous ranking: 7)

The big news about Booker since the last time we did these rankings is that it's now confirmed he is dating actress Rosario Dawson. We kid -- but not totally. Booker, whether by design or not, hasn't broken through much of late. As North Jersey Record political columnist Charles Stile wrote recently of Booker: "There is no evidence yet that Booker's big-hearted, love-thy-enemy theme has struck a chord with the broader Democratic primary electorate, which for now is unified in its anger and determination to defeat President Donald Trump." (Previous ranking: 6)

The senior senator from Minnesota is a rare breed. Klobuchar is one of the few Midwestern candidates in the race. And she is one of the few candidates not running to the left, which could be good, because the Democratic Party's electorate isn't as liberal as you probably think it is. Finally, she may have the best case to make about electability of any candidate in the field. If Klobuchar can combine that electability argument with the desire of Democratic voters to nominate a woman, she'll be golden. If only it were so easy for her. One obvious issue for Klobuchar is the stories about how she treats her staff. Another one? How about the fact that she's been passed by the other Midwestern candidate (Buttigieg) in the polls? (Previous ranking: 5)

There is zero debate that the 37-year-old mayor of South Bend is the "it" boy of the Democratic primaries right now. Beginning last month with a star turn in a CNN-sponsored town hall, the buzz around Mayor Pete has only continued to grow. His $7 million haul in the first quarter was surprisingly high and his recent comments to Vice President Mike Pence about his sexuality ("your problem is not with me -- your quarrel, sir, is with my creator.") went viral. Everything Buttigieg touches at the moment turns to political gold. To be honest, we actually weighed whether we should move him above the next man on our list ... (Previous ranking: Unranked)

O'Rourke stays in the top half for obvious reasons. He self-reported raising the third-highest amount of money in the first quarter and is consistently third or fourth in the polls. O'Rourke also seems to be able to keep the media on him, a skill that put a certain someone in the White House. O'Rourke has consistently been at the top of the field for most mentions on cable news. And if Democrats are looking for a candidate to take the border fight directly to Trump, then who better positioned than a candidate from Texas? Still, O'Rourke is in real danger of being passed by Buttigieg as the hot new item on the Democratic side. O'Rourke additionally saw a much bigger drop-off in fundraising in the days after his announcement than Sanders. (Previous ranking: 4)

The California senator, after an initial pop following her pitch-perfect announcement tour, has settled into the front-runner pack. She continues to travel to early states and build credible organizations. The only reason she drops from the No. 1 spot she held down in our rankings for the past six months is that polling -- in early states and nationally -- suggests she is lagging behind both of the men who we put in front of her this month. That, obviously, can change as the campaign gets more engaged and Harris starts spending money on raising her name ID with key early-state voters. (Previous ranking: 1)

The Democratic 2016 runner-up has steadily climbed our list the last few months. Today, he shares co-front-runner status with Biden. The reasons are simple. As Harry wrote, Sanders raised the most money in quarter one, he is getting a ton of media attention, he is near the top of the polls and the establishment has not turned against him (yet). The fundraising is particularly impressive because Sanders didn't just raise a ton of money on day one and stop. It's been a steady stream, which could be indicative of how it goes for him down the line. Sanders, like Biden, though, may not last, given that Democrats say they aren't comfortable with a candidate over age 75. And remember, Sanders is still running 10 points behind someone (Biden) who has similar name recognition and just had a terrible week of media coverage. (Previous ranking: 3)

It's not been a great month for the former vice president. He's still not in the 2020 race and he's had to weather a series of allegations from women who say he violated their personal space and made them feel uncomfortable. But here's the thing: Biden is running -- and he's announcing this month. And judging by the polling that has come out in the wake of the personal space issues, the allegations -- and his less-than-stellar handling of them -- haven't done him much real damage. Those facts, when coupled with the fact that he continues to run in first place in every major national and early state poll, is enough to give Biden a share of the top spot this month. (Previous ranking: 2)