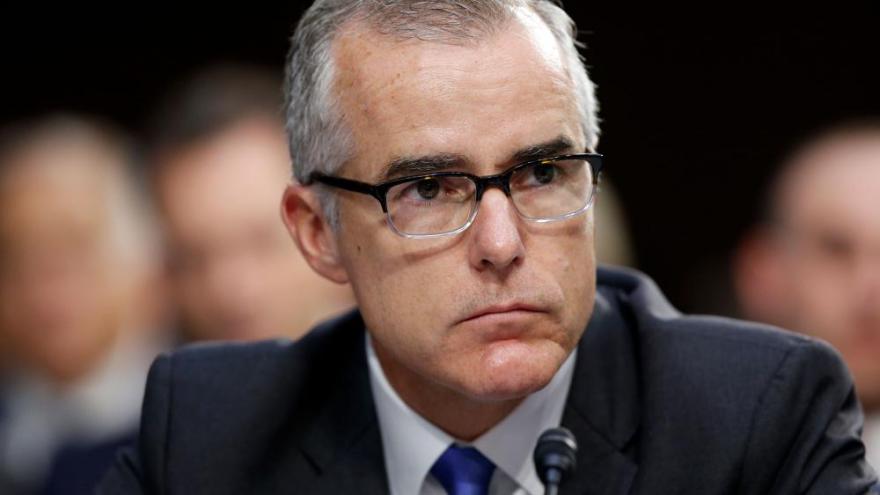 Former FBI Deputy Director Andrew McCabe said an investigation should be launched into how he and former FBI Director James Comey were both selected by the Internal Revenue Service for an intensive tax audit.

(CNN) -- Former FBI Deputy Director Andrew McCabe on Wednesday said an investigation should be launched into how he and former FBI Director James Comey were both selected by the Internal Revenue Service for an intensive tax audit.

"It just defies logic to think that there wasn't some other factor involved," McCabe told CNN's Laura Coates on "Don Lemon Tonight" of his purportedly random selection for the audit, which he characterized as an "incredibly rigorous" and "nerve-wracking" process.

"I think that's a reasonable question. I think it should be investigated. People need to be able to trust the institutions of government and so that's why there should be some -- we should dig through this and find out what happened," he continued.

The New York Times reported earlier Wednesday that the IRS conducted intensive tax audits of McCabe and Comey, both fierce critics of former President Donald Trump. The Times noted that the odds of any one person being selected for the audit are about one in 30,600, raising questions about how two of Trump's most visible critics were both selected.

McCabe told CNN he had not known of Comey's audit when he received notice from the IRS.

Charles Rettig, a Trump appointee, has lead the IRS since 2018. The agency said in a statement to the Times he has no role in selecting candidates for audits.

McCabe, a CNN law enforcement analyst, was one of the central leaders of the early Russia investigation that pursued Trump's advisers and questions about whether the then-President had obstructed justice. In March 2018, two days shy of McCabe's scheduled retirement date, then-Attorney General Jeff Sessions fired him from the FBI.

Trump and Comey had a similarly tumultuous relationship. In a stunning move, Trump fired Comey as FBI director in May 2017, triggering the appointment of a special counsel. Trump has called Comey a "liar" and "leaker" and suggested that his actions were treasonous. Comey has bashed Trump as an stain on American democracy.

"I don't know whether anything improper happened, but after learning how unusual this audit was and how badly Trump wanted to hurt me during that time, it made sense to try to figure it out," Comey said in a statement to the Times. "Maybe it's a coincidence or maybe somebody misused the I.R.S. to get at a political enemy. Given the role Trump wants to continue to play in our country, we should know the answer to that question."

How taxpayers are selected for the intensive audits is not known outside the IRS, the Times noted.

The IRS denied any "politically motivated audits" in a statement to CNN Wednesday evening. "Federal Privacy laws preclude us from discussing specific taxpayer situations. Audits are handled by career civil servants, and the IRS has strong safeguards in place to protect the exam process -- and against politically motivated audits," the statement said.

CNN has reached out to representatives for Trump for comment. The former President, through a spokesman, said in a statement to the Times: "I have no knowledge of this."

McCabe told CNN in a statement that "while the IRS investigator I dealt with was professional and responsive at all times, I have questions about how I was selected for this audit."