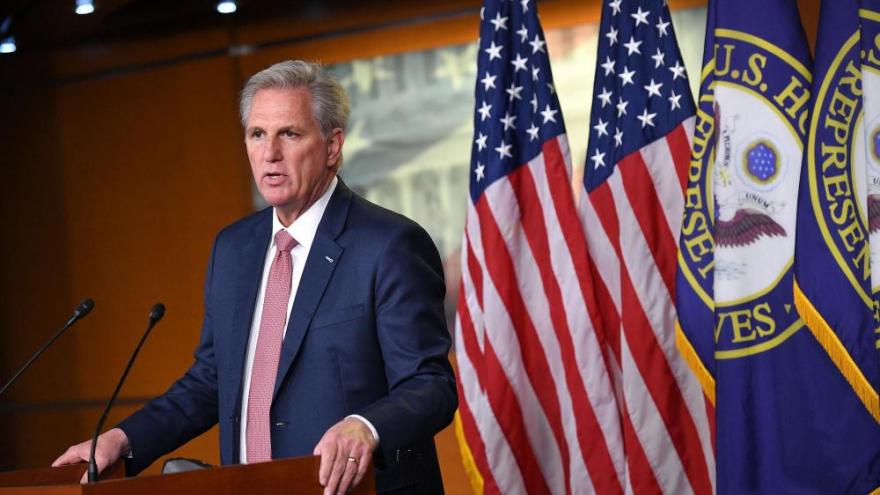 House Minority Leader Kevin McCarthy is telling his Republican House colleagues to "anticipate" a vote on Wednesday regarding the current state of the House GOP Conference Chair position. McCarthy is shown during a press briefing on Capitol Hill in Washington, DC, on March 18, 2021.

(CNN) -- House Minority Leader Kevin McCarthy is telling his Republican House colleagues to "anticipate" a vote on Wednesday regarding the current state of the House GOP Conference Chair position, which is expected to end with Liz Cheney being removed from her leadership role over her opposition to former President Donald Trump.

It's the latest step toward what is increasingly seen as Cheney's inevitable replacement with Rep. Elise Stefanik of New York, who has a more moderate voting record than Cheney but has been a full-throated supporter of Trump. Cheney has rankled many of her fellow colleagues by refusing to back down over her condemnation of Trump's falsehoods about the 2020 election and specifically his role in inciting the Capitol riot, and the controversy has starkly illustrated the former president's continued grip over the party.

In his letter, which was first reported by Punchbowl News and obtained by CNN, McCarthy does not mention Cheney by name but said that he and the leadership team should "exist to serve you, not the other way around." He goes on to say that he wants the "driving focus" of the House GOP to be to win the majority in 2022.

A vote on conference chair is necessary, McCarthy writes, because the controversy over Cheney is distracting from the main goals of winning back the majority.

"If we are to succeed in stopping the radical Democrat agenda from destroying our country, these internal conflicts need to be resolved so as to not detract from the efforts of our collective team. Having heard from so many of you in recent days it's clear we need to make a change. As such, you should anticipate a vote on recalling the Conference Chair this Wednesday," McCarthy writes.

McCarthy then tells his fellow members that his goal is to allow the free flow of ideas within the party, but makes it clear the job of leadership is be focused on the goals of the entire caucus, not just one member.

"We are a big tent party," McCarthy writes. "We represent Americans of all backgrounds and continue to grow our movement by the day. And unlike the left, we embrace free thought and debate. All members are elected to represent their constituents as they see fit, but out leadership team cannot afford to be distracted by the important work we were elected to do and the shared goals we hope to achieve."

McCarthy confirmed on Sunday that he backs Stefanik for the role.

Several top Senate Republicans were uneasy Monday about the House GOP's expected purge of Cheney from their leadership ranks, calling on their party to unify amid a nasty fight exposing their party's divisions over Trump. While a number of Senate Republicans downplayed the squabble as simply an inside-the-Beltway dispute that most voters are ignoring, others said it sends the wrong message as their party tries to take back control of Congress and focus their opposition on President Joe Biden's agenda.

Sen. Joni Ernst, an Iowa Republican and member of Senate Minority Leader Mitch McConnell's leadership team, said that "cancel culture is cancel culture, no matter how you look at it ... we shouldn't be trying to cancel voices."

"I do hope we can get as unified as possible, because as long as Republicans are divided, the Democrats will take advantage of that," Sen. John Cornyn of Texas said, sidestepping questions about whether House Republicans should boot Cheney from leadership.

But Sen. Lindsey Graham of South Carolina, a strong Trump ally, said Monday that while there is room for members of the Republican Party to be anti-Trump, they can't hold leadership positions.

"When you make these political decisions, you need to understand the consequences," Graham said in regard to Cheney.