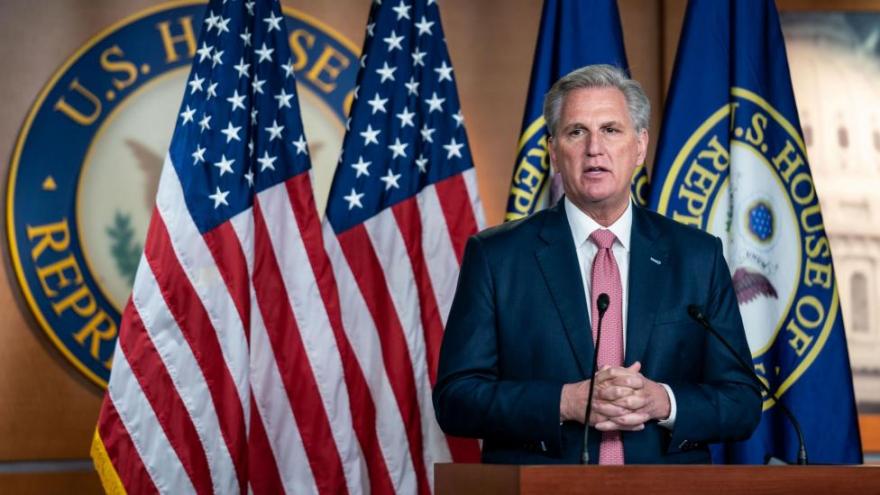 House Minority Leader McCarthy said he would strip any Republican member of their committee assignments if they accept the offer from House Speaker Pelosi.

(CNN) -- House Minority Leader Kevin McCarthy on Wednesday issued a blanket threat during a meeting with freshmen members of his caucus that he would strip any Republican member of their committee assignments if they accept an offer from House Speaker Nancy Pelosi to serve on the select committee to investigate the January 6 insurrection, according to two GOP sources with knowledge of the matter.

McCarthy's threat comes after the House voted to establish the committee. Reps. Liz Cheney of Wyoming and Adam Kinzinger of Illinois were the only two Republican members to vote in favor of its formation. It's not yet clear whether Pelosi will appoint Republicans to the commission, but the threat from McCarthy underscores how he feels about any members accepting an offer from the Democrats to serve on the committee.

Two GOP sources told CNN McCarthy's threat speaks to one thing -- that the GOP leader is threatened by the select committee and once again is doing everything he can to try to kill it.

Pelosi made the move to establish the committee after Senate Republicans blocked the formation of a bipartisan commission to investigate the attack on the US Capitol.

After Wednesday's vote, McCarthy refused to say if he will cooperate and offer up members to serve on the committee, telling CNN, "It seems pretty political to me." He did not respond when CNN asked if that meant he would not appoint anyone.

Under the House's resolution, Pelosi will appoint eight members to the commission and McCarthy has five slots he can fill "in consultation" with Pelosi -- meaning the House speaker could veto his selections.

Asked Tuesday if she would consider vetoing McCarthy's selections if they had voted to overturn President Joe Biden's electoral win, Pelosi said, "We'll see. We'll see who they nominate."

Reacting to the news of McCarthy's threat, Kinzinger, who said he didn't hear it directly from McCarthy, told reporters, "Who gives a sh*t?"

"When you've got people that say crazy stuff and you're not gonna make that threat, to make the threat the truth tellers, you've lost, you know any credibility and then so that's all I'm gonna say on it."

Kinzinger said Wednesday if he was asked to serve on the committee, he would consider it.

"It's not necessarily anything I look forward to doing, but if I thought my voice was needed to get to the bottom of it, it would be something I would be open to," he told a local TV station.

"Our nation, and the families of the brave law enforcement officers who were injured defending us or died following the attack, deserve answers," Cheney said Wednesday. "I believe this select committee is our only remaining option."