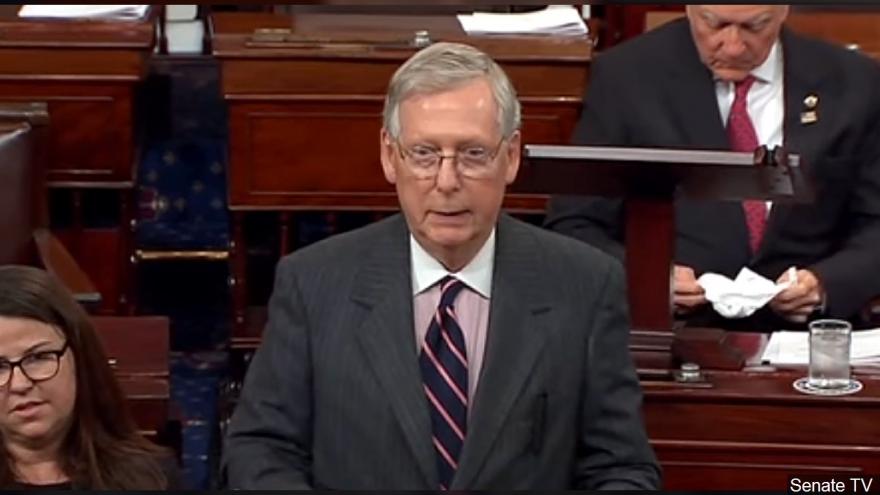 Analysis by Zachary B. Wolf and graphics by JoElla Carman, CNN

(CNN) -- President Donald Trump has a perfect veto-free record so far, the result of support from Senate Majority Leader Mitch McConnell and, until they lost their majority, Republicans in the US House.

But that could change now that the Democrats in charge of the House have rebuked the President over his declaration of a national emergency at the US border.

McConnell won't be able to make the bill go away by tabling it or rallying a filibuster and it's possible that enough Senate Republicans will vote with Democrats to send the measure of disapproval for the national emergency to the President's desk.

So the President might be faced with finally issuing a veto in order to continue his effort to get around lawmakers of both parties to gather more money for his wall on the southern border.

It's been almost 140 years since a US president didn't veto anything during his time in the White House. And that President, James Garfield, was assassinated before he could serve a full year in office in 1881.

If he issues a veto soon, Trump will fall somewhere after Garfield and George W. Bush, who served a full four-year term without issuing a veto. But Bush made up for lost time in his second term, especially when Democrats took control of the House and the Senate in 2007.

A number of Republican senators have expressed a willingness to break with Trump over the national emergency declaration. And 13 Republican representatives have already sided with Democrats on the issue.

That's enough to force his veto, but not nearly enough to overturn it.

It would seem to take just one more defection by a Republican for the measure to have the votes it needs to pass the Senate. CNN's Chris Cillizza put together a list of senators to keep an eye on, including Cory Gardner of Colorado, Joni Ernst of Iowa and Martha McSally of Arizona.

What happens after a Trump veto?

There's a big difference between forcing a veto and overturning it. Vetoes can be overridden only by a two-thirds supermajority vote in both chambers on Capitol Hill. In the House, Democrats have 235 seats, Republicans have 197 and there are three vacancies. Since the measure overturning the national emergency won 245 votes there, that means Democrats would have to pick up an additional 43 to 45 House Republican votes to get to 288-290 and a two-thirds majority, depending on how many lawmakers vote. Assuming the bill passes in the Senate with four Republicans, they'd need to pick up an additional 16 Republican votes.

How uncommon is Trump's veto-free streak?

We're taking for granted that presidents would not want to use the veto, but some clearly relish their fights against Congress. Harry Truman, who issued 250 vetoes, ran a successful re-election campaign in 1948 against the "do nothing" Congress. The most veto-happy President, Franklin D. Roosevelt, read a veto message aloud to Congress.

In Trump's case, though, if he must veto his national emergency declaration, it will underline that he is pushing a policy opposed by most of the country.

Still, presidential vetoes occur more often than you might think. Every president since Garfield has vetoed at least one bill. The younger Bush was the first president since John Quincy Adams to go a full four years without a veto, according to the Congressional Research Service. The House, which was Republican-led for Bush's entire first term, was protecting him from bills he opposed. Barack Obama, similarly, had help on Capitol Hill for most of his presidency, just as Trump has. But Obama did veto two bills even when Democrats controlled both chambers of Congress.

The President with the most vetoes was Democrat Roosevelt, with 635, although he also served the longest in the White House (12 years). All those vetoes came even though Roosevelt enjoyed Democratic majorities for his entire time in the White House.

If you plot vetoes alongside how closely aligned Congress is to the president, it used to be quite common for a president to veto bills from a House and Senate aligned with him. This data comes from The American Presidency Project at the University of California at Santa Barbara.

But that's changed in modern history. If you look only at vetoes since 1972, when Richard Nixon faced a Democratic-led Congress, most of the vetoes have come when at least one chamber was not aligned with the President.

Veto overrides, of course, are much more rare than vetoes. There have been only 111 in the history of the country, and they have impact.

One of the country's few impeachments, Andrew Johnson's, was precipitated by a veto override.

In more recent history, the Clean Water Act in 1972 and an expansion of the Freedom of Information Act in 1974 both passed despite presidential vetoes. The last time an appropriations bill was overridden was during Ronald Reagan's administration in 1982, according to The American Presidency Project.

George W. Bush vetoed 12 bills during his presidency and Congress overrode a quarter of them.