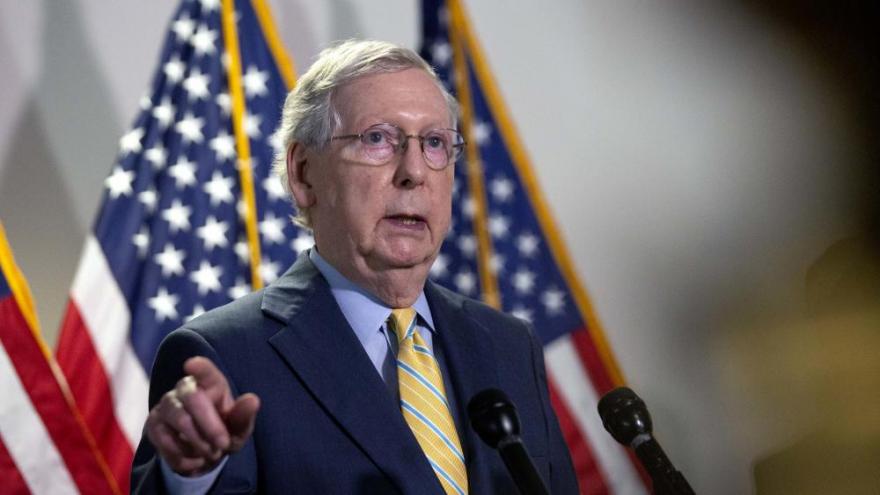 Senate Majority Leader Mitch McConnell (R-KY) said that he hopes in the next two to three weeks the Senate will be able to get the next coronavirus relief bill to the House.

(CNN) -- Senate Majority Leader Mitch McConnell said that he hopes in the next two to three weeks the Senate will be able to get the next coronavirus relief bill to the House.

"Hopefully in the next two to three weeks we'll be able to come together and pass something that we can send over to the House and down to the President for signature," McConnell told CNN affiliate WKTY in an interview posted Friday evening.

McConnell said he will begin talking to Democrats as soon as next week on the bill.

When asked about a payroll tax cut being excluded from the bill, McConnell explained that there was bipartisan opposition to the idea, and added, "I think we are a lot better off just to send another direct cash payment to those who have been left out of all of this." He noted that the payroll tax would only help those who have a job.

McConnell again stated that he does not support an extension of the $600 federal unemployment benefit but does support continuing the traditional state-led unemployment program.

"We're going to send 100 million dollars to Kentucky for testing, I don't think we still have enough testing across the country, and we are more than open to spending additional money on testing and treatment and vaccine in the next coronavirus relief bill, if in fact we believe that more funding would be helpful," McConnell, a Kentucky Republican, said.

On Saturday, Treasury Secretary Steven Mnuchin and White House chief of staff Mark Meadows spoke to reporters on Capitol Hill as they met with members for talks regarding another coronavirus stimulus bill.

"We're just trying to make sure that we've identified all the legitimate needs that are out there. The President has been very clear about one thing, if they're legitimate needs he wants to make sure that there's enough money there to take care of those needs. And he wants to be, not only expeditious in that deployment of funds, but also make sure that people do not use this funding mechanism as a way to just fund some pet project that may not be a priority for the vast majority of the American people," Meadows told reporters when asked if the White House was looking to pass more than one bill in the next round of relief.

Mnuchin said the Trump administration was "prepared to move quickly" on an extension of unemployment insurance. "We want to make sure that there's a technical correction, so that people don't get paid more money to stay home than to work. So we're fundamentally focused on about a 70% wage replacement," he said.

Millions of jobless Americans are anxiously waiting for Congress to decide whether to extend the $600 weekly boost to unemployment benefits that's been a key economic lifeline through the pandemic.

This was the last week for which unemployed workers will receive the enhanced payment, even though the coronavirus relief program technically doesn't expire until July 31. That's because payments are only provided for weeks ending on either Saturday or Sunday.

Senate Republicans remain divided over how much help to provide, delaying the release of their next economic relief proposal. Republican lawmakers are debating whether to reduce the payments and to possibly include a bonus for those who accept job offers because of concerns that the generous enhancement is a disincentive to returning to work. Democrats have proposed continuing the $600 benefit into 2021.

And a second round of stimulus payments isn't a done deal. The White House is pushing for it, and McConnell said Tuesday that he's in favor of including them in the next relief package. But the GOP appears divided over the issue and there's a long way to go before the Republican-controlled Senate and Democratic-controlled House agree on a bill.

In the first round, individuals were due a one-time payment of up to $1,200 and families could receive $2,400 plus $500 per child. The size of the payments scaled down by income level and phased out altogether for higher-income Americans.

This story has been updated with comments Saturday from Treasury Secretary Steven Mnuchin and White House chief of staff Mark Meadows.