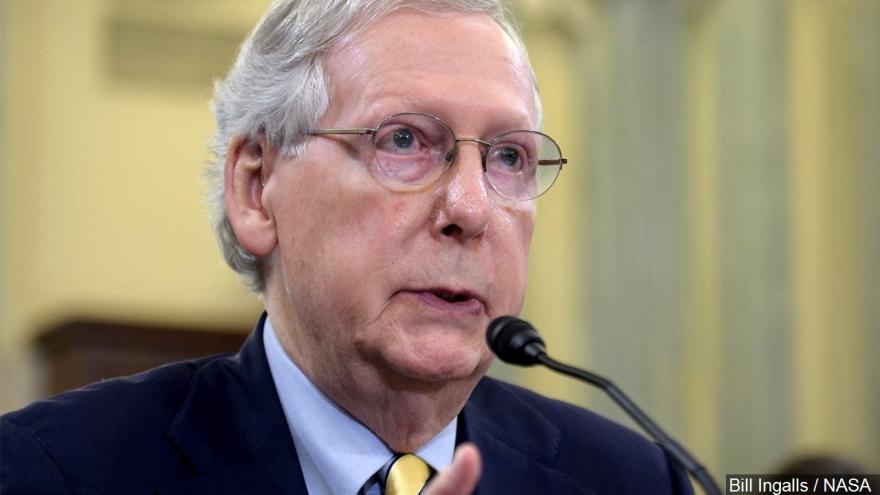 LOUISVILLE, Ky. (AP) — Senate Majority Leader Mitch McConnell vows to stop any Democratic push for impeachment in a social media campaign ad that he's using as a platform to raise campaign funds off the inquiry of President Donald Trump.

In the brief Facebook video, McConnell makes it clear that the Republican-controlled Senate with him in charge will be a firewall against efforts to remove Trump from office.

"All of you know your Constitution," McConnell says in the video. "The way that impeachment stops is with a Senate majority with me as majority leader."

The Senate leader, a steadfast Trump defender, avoided the impeachment issue during public appearances in his home state of Kentucky this past week.

But McConnell recently swatted down talk that the Senate could dodge considering articles of impeachment if the Democratic-led House approved charges against Trump.

"It's a Senate rule related to impeachment, it would take 67 votes to change, so I would have no choice but to take it up," McConnell said recently on CNBC. "How long you're on it is a whole different matter."

House Democrats began the impeachment inquiry after revelations that Trump asked the Ukrainian president to investigate his potential 2020 Democratic challenger, Joe Biden, and his family.

Foreign interference in elections has long been viewed as a threat to U.S. sovereignty and the integrity of democracy, and soliciting foreign help in an election is illegal.

In his video, McConnell appears to predict that the matter of impeachment will reach the Senate. The Kentucky Republican says that House Speaker Nancy Pelosi is "in the clutches of a left-wing mob that finally convinced her to impeach the president."

Looking to capitalize on the polarizing issue, McConnell makes a fundraising plea at the end of the video, saying: "I need your help. Please contribute before the deadline."

McConnell is running for reelection next year and regularly plays up his ties to Trump, who easily carried Kentucky in 2016 and remains popular in the state.

"Few issues energize conservative voters like liberal overreach and the Democrats' latest outrageous attempt to impeach President Trump has activated our base to new heights," Golden said in a statement Saturday night.