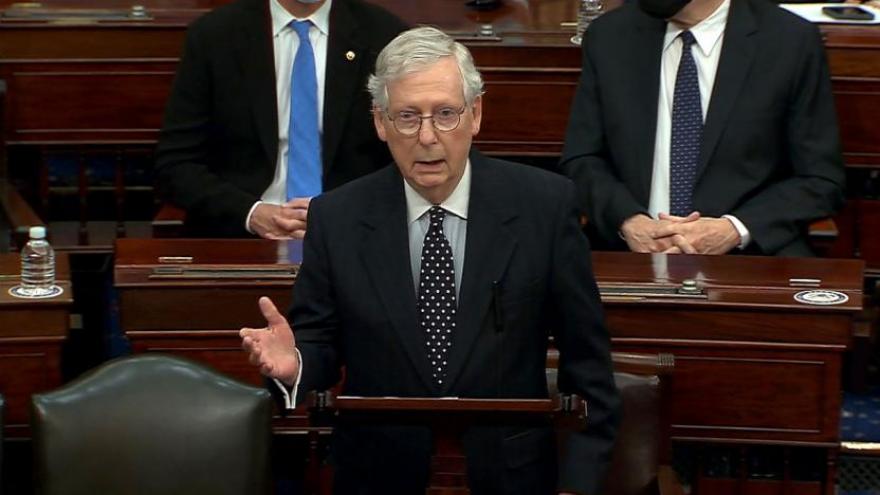 Senate Majority Leader Mitch McConnell broke with President Donald Trump on Jan. 6 to deliver a stark warning in opposition to efforts to overturn the results of the 2020 presidential election.

(CNN) -- Senate Majority Leader Mitch McConnell broke with President Donald Trump on Wednesday to deliver a stark warning in opposition to efforts to overturn the results of the 2020 presidential election.

"The Constitution gives us here in Congress a limited role. We cannot simply declare ourselves the national board of elections on steroids. The voters, the courts and the states have all spoken. They've all spoken. If we overrule them it would damage our republic forever," McConnell said in a floor speech before Trump-inspired protesters stormed the US Capitol building.

The remarks from the top Senate Republican come as a joint session of Congress convened to count the Electoral College votes. A slate of Republican lawmakers are challenging the results from multiple states -- an effort encouraged by Trump that is doomed to fail, but that has divided Republicans and that members on both sides of the aisle have warned dangerously seeks to subvert the popular will of the voters.

"We're debating a step that has never been taken in American history -- whether Congress should overrule the voters and overturn a presidential election," McConnell said.

He continued on to say, "President Trump claims the election was stolen. His assertions range from specific local allegations to Constitutional arguments to sweeping conspiracy theories. I supported the President's right to use the legal system. Dozens of lawsuits received hearings in court rooms all across our country, but over and over the courts rejected these claims, including all-star judges whom the President himself nominated."

Trump has repeatedly made false claims that the election was rigged, but there has never been evidence of widespread voter fraud.

Each time a House member and Senator both object to the vote count for a state, the House and Senate will retreat to their respective chambers to debate the objection for up to two hours. Each chamber will then vote on whether to reject that state's certification, but both chambers need to be in agreement for those electoral votes to be nullified. Any votes on objection are doomed to fail due to opposition from House Democrats who control the majority in that chamber as well as from Senate Republicans like McConnell.

"If this election were overturned by mere allegations from the losing side, our democracy would enter a death spiral. We'd never see the whole nation accept an election again. Every four years it would be a scramble for power at any cost," McConnell said.

"It would be unfair and wrong to disenfranchise American voters and overrule the courts and the states on this thin basis, and I will not pretend such a vote would be a harmless protest gesture while relying on others to do the right thing," McConnell said, adding, "I will vote to respect the people's decision and defend our system of government as we know it."