McDonald's is fighting the breakfast war with chicken sandwiches 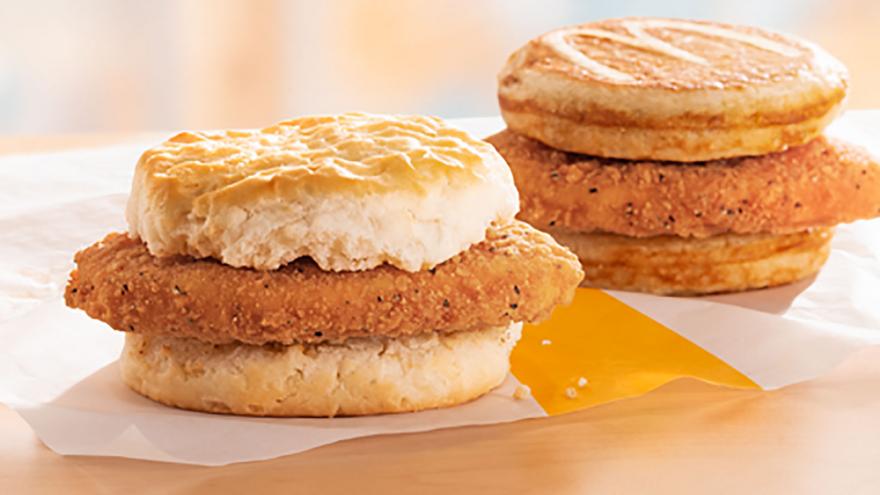 (CNN) -- McDonald's is trying to cash in on Americans' growing appetite for chicken sandwiches while upping its game in the increasingly competitive breakfast segment.

Starting this week, the fast food giant is selling its Chicken McGriddles and McChicken Biscuit sandwiches nationally for a limited time. They were previously available only in some regional markets.

Customers have been flocking to chains like Chick-fil-A and Popeyes for their chicken sandwich fix. But McDonald's, which sells chicken sandwiches and tests new options periodically, has failed to inspire the type of excitement its competitors generate. Currently, McDonald's is trialling a crispy chicken sandwich and a deluxe version with tomatoes, lettuce and mayo, in Knoxville, Tennessee, and Houston, Texas.

Franchise operators have beenworried that McDonald's is losing business because of its weakoptions.

The board of the National Owners Association, a group of McDonald's franchisees, lamented in July that "unfortunately, [customers] have to go to Chick-fil-A" for the chicken sandwich they crave. "We have great Chicken McNuggets and our McChicken is a very good product. But we do not compete in the premium chicken sandwich category, either grilled or crispy," the board continued.

The national launch of the Chicken McGriddles —made with griddle cakes and a McChicken patty —and the McChicken Biscuit could help appease franchise operators.

"Our owner operators are looking forward to introducing new chicken offerings to the menu," Linda VanGosen, vice president of menu innovation at McDonald's, told CNN Business in an email. "They have seen firsthand the demand for more chicken offerings and more breakfast offerings, and we're able to satisfy both of these cravings with Chicken McGriddles and McChicken Biscuits."

VanGosen added that in the markets where they are available, the sandwiches "have been enthusiastically welcomed by customers." Though the national test is running for a limited time, restaurants can decide to to keep the items on their menu for longer, she added.

The test could also help McDonald's compete in another competitive category: breakfast.

McDonald's, which started serving breakfast all day in 2015, boasts that it is a leader in the category. "We win at breakfast," VanGosen said. "We're frequently innovating and adding new breakfast offerings."

But the space is getting competitive.

Wendy's announced in September that it will start serving breakfast nationally, a $20 million investment that requires the chain to hire about 20,000 new employees. The Wendy's menu includes a honey butter chicken biscuit and maple bacon chicken croissant. Dunkin', which has been experimenting with healthy breakfast items, launched a breakfast sandwich last year that ismade with a plant-based Beyond sausage, luring customers with a trendy new option. And IHOP unveiled plans for a new store, Flip'd, that will serve freshly-prepared breakfast to go.

"We've seen competitors ... ramp up their activity during this year," former McDonald's CEO Steve Easterbrook said during an October call discussing the company's third-quarter earnings. Breakfast is an "important" segment "for us to protect and grow," he added. "We're used to fighting for our share, and we'll carry on doing that." During that quarter, McDonald's missed Wall Streets' expectations for sales at its US restaurants open at least 13 months.