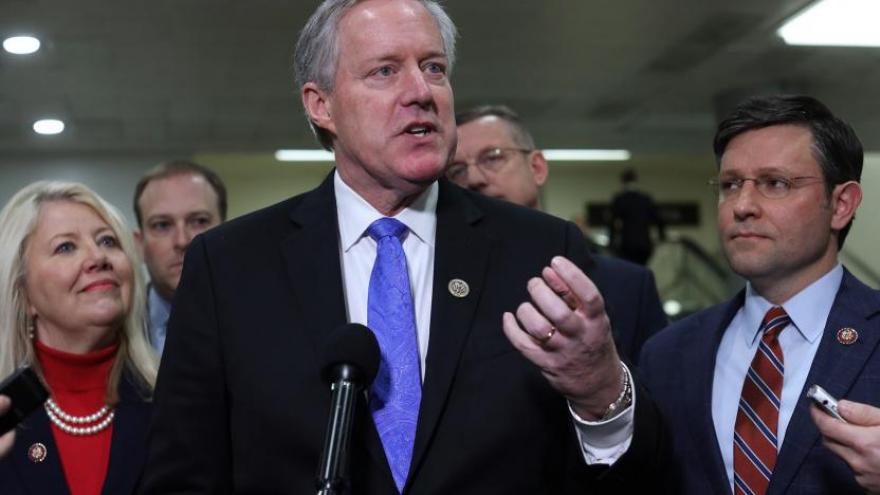 Rep. Mark Meadows will resign from Congress as he prepares to officially become White House chief of staff, an aide to the North Carolina congressman told CNN.

(CNN) -- Rep. Mark Meadows resigned from Congress on Monday as he prepares to officially become White House chief of staff.

"Serving the people of North Carolina's eleventh congressional district for these last seven years has been the honor of my life," he wrote in a letter to House Speaker Nancy Pelosi. "I will forever be grateful for the opportunity."

He wrote that his resignation was effective as of 5 p.m. ET.

Meadows has been at President Donald Trump's side for the last several weeks as part of a transition period. He will officially have his first day as White House chief of staff on Tuesday, a Meadows aide told CNN.

Meadows will be Trump's fourth chief of staff, replacing Mick Mulvaney, another former congressman, in the position.

After being one of the first Republican lawmakers to campaign with Trump ahead of the 2016 election, while others were initially keeping their distance, Meadows has become one of Trump's closest advisers.

He is a regular presence in the West Wing and has developed a close relationship with Trump's son-in-law and daughter, senior advisers Jared Kushner and Ivanka Trump -- a staple of West Wing proximity.

While Meadows was still occupying his congressional seat after announcing his departure, he had been speaking with the President several times a day on the phone and advising him on a wide variety of matters, according to a person familiar with the matter.

In his new role, Meadows will have one quality his predecessors lacked: strong relationships with lawmakers on both sides of the aisle. Not only was Meadows a member of the conservative Freedom Caucus during his time on Capitol Hill, he also has ties with several Democratic lawmakers.

The chief of staff role, traditionally one of the most important in any administration, has been a famously difficult one in the Trump era. All three of his chiefs have tried different governing styles, but the result is nearly always the same: The President ultimately makes the decisions, and eventually undercuts his top deputy.

Meadows is bringing only one staffer from his House office to join him in the White House -- his chief of staff. He will also bring on a couple of aides already working in the Trump administration to his team, a person familiar with his plans said. Meadows will also hire former Rep. John Fleming, a former fellow Freedom Caucus member and current assistant secretary at the Commerce Department, as a senior aide.

But Meadows will have a smaller-than-usual coterie within the White House, unlike some of his predecessors who sought to bring allies with them.

CNN's Kevin Liptak and Sarah Westwood contributed to this report.