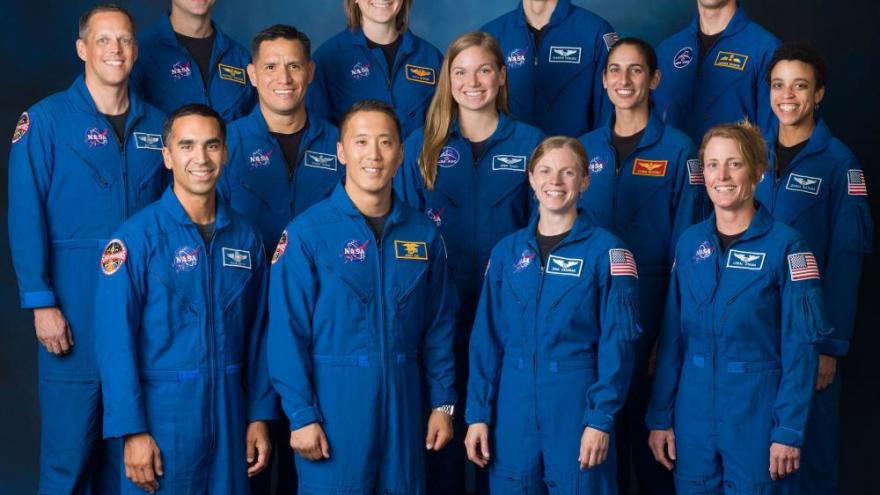 After more than two years of training, the first class of NASA astronaut candidates under the agency's program to land the first woman and next man on the moon have graduated.

(CNN) -- After more than two years of training, the first class of NASA astronaut candidates under the agency's program to land the first woman and next man on the moon have graduated.

The candidates, selected in 2017, graduated Friday morning during a ceremony at the agency's Johnson Space Center in Houston.

The group includes six women and seven men. Two candidates are from the Canadian Space Agency. The other 11 NASA candidates were selected from an initial pool of more than 18,000 applicants, the agency said.

As part of the process to become astronauts, the candidates trained in robotics; systems used aboard the space station; exercises that simulate spacewalking; flying T-38 jets; and learning the Russian language due to NASA's partnership with Roscosmos for launches to the space station and talking to Russian astronauts aboard the ISS.

In addition to being eligible for spaceflight, the astronauts will also support those who are currently in the space station and develop spacecraft for future missions.

The official NASA biographies provided education and experience details for each of the new astronauts.

Kayla Barron is a US Navy lieutenant from Richland, Washington, with a bachelor's degree in systems engineering and a master's degree in nuclear engineering. Barron also served as a submarine war officer.

Zena Cardman is from Williamsburg, Virginia, and holds a bachelor's degree in biology and master's degree in marine sciences from the University of North Carolina, Chapel Hill. Cardman's research includes microorganisms found in environments like caves or even deep sea sediments, and she has conducted several expeditions to Antarctica.

Raja Chari is a US Air Force colonel from Cedar Falls, Iowa, with bachelor's degrees in astronautical engineering and engineering science as well as a master's degree in aeronautics and astronautics. Chari also graduated from the US Naval Test Pilot School.

Matthew Dominick is a US Navy lieutenant commander from Wheat Ridge, Colorado, with a bachelor's degree in electrical engineering and a master's degree in systems engineering. Like Chari, he also graduated from the US Naval Test Pilot School.

Dr. Jonny Kim is a US Navy lieutenant and resident physician in emergency medicine from Los Angeles. Kim received a bachelor's degree in mathematics and a doctorate of medicine. Kim was also a Navy SEAL who served during more than 100 combat missions, earning a Silver Star and Bronze Star with Combat V (with valor).

Joshua Kutryk is one of the Canadian Space Agency candidates and a Royal Canadian Air Force lieutenant colonel from Beauvalion, Alberta. Kutryk earned a bachelor's degree in mechanical engineering and master's degrees in space studies, defense studies and flight test engineering. He was previously a fighter pilot and experimental test pilot.

Loral O'Hara is a research engineer from Houston, Texas, with a bachelor's degree in aerospace engineering and a master's degree in aeronautics and astronautics. O'Hara engineered, tested and operated deep-sea submersibles and robots at Woods Hole Oceanographic Institution in Massachusetts.

Dr. Francisco Rubio is a US Army lieutenant colonel from Miami, Florida, with a bachelor's degree in international relations and a doctorate of medicine. He previously served as a surgeon and a Blackhawk helicopter pilot during combat.

Jennifer Sidey-Gibbons is the second Canadian Space Agency candidate, and an assistant professor in combustion at the University of Cambridge. She is from Calgary, Alberta and earned a bachelor's degree in mechanical engineering as well as a doctorate in engineering. While in school, she worked on research regarding flame propagation in microgravity.

Jessica Watkins worked at NASA before becoming an astronaut. She's from Lafayette, Colorado, and earned a bachelor's degree in geological and environmental sciences as well as a doctorate in geology. Watkins worked at NASA's Ames Research Center in Silicon Valley and at NASA's Jet Propulsion Laboratory in Pasadena. She's also worked on the Curiosity rover during her time at the California Institute of Technology.