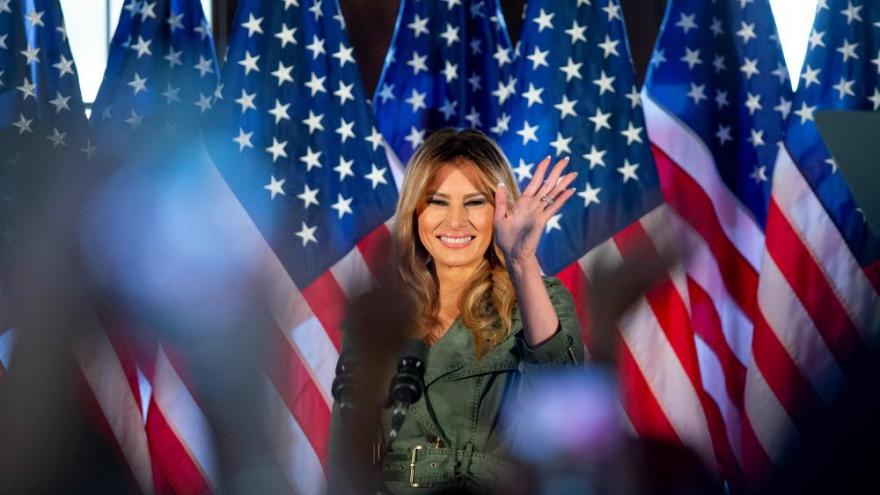 (CNN) -- Melania Trump tweeted a video of herself posted Thursday discussing for three minutes the efforts the Trump administration has made to support the rights of the gay community, blaming sentiments that President Donald Trump opposes gay rights on his "many enemies in the political establishment."

"I was shocked to discover that some of these powerful people have tried to paint my husband as anti-gay or against equality. Nothing could be further from the truth," said the first lady.

However, Trump has as President made several policy decisions which have affected the rights and lives of the gay community, and not in a positive way. As a presidential candidate, Trump ran on his personal belief supporting marriage only between a man and a woman.

And in 2011, before running for office, Trump was asked by Fox News' Bill O'Reilly about same-sex marriage.

"I just don't feel good about it. I don't feel right about it. I'm against it and I take a lot of heat because I come from New York. You know, for New York it's like, how can you be against gay marriage? But I'm opposed to gay marriage," he said.

But Melania Trump in the video touts her husband as the "first president to enter the White House supporting gay marriage."

A week after the election, Trump said in a televised interview that he was "fine with" the Supreme Court decision to allow same-sex marriage, but it was not exactly a ringing endorsement.

"It's irrelevant because it's already settled," he said of whether he supports same-sex marriage.

Within six months of his tenure, Trump proposed a ban on transgender individuals entering the military. Though a discrimination case reached the Supreme Court in January 2019, the court didn't rule on the legality of the ban, meaning it could go into effect and dealing a blow to LGBTQ activists.

Trump also reminds viewers that her husband is the leader of the Republican Party, in addition to being President, adding in her estimation he has always treated gays and lesbians equally. Yet the official Republican Party platform opposes same-sex marriage and calls for overturning Obergefell v. Hodges, the Supreme Court decision that legalized it.

In the video, which was posted to the Twitter account of the Log Cabin Republicans, a group of pro-gay rights Republicans who advocate for equal rights, and retweeted on Trump's social media accounts, the first lady says America under her husband, "protects diversity."

In truth, the administration is rolling back parts of the Affordable Care Act that directly affect transgender and non-binary Americans. Section 1557 of the Affordable Care Act, passed under former President Barack Obama in 2010, prohibits sex discrimination in federally funded health programs and activities; a 2016 rule interpreted this as including discrimination on the basis of gender identity. The Trump administration has limited the scope of that section of the law to stop offering civil rights protection to transgender and non-binary people.

The Log Cabin Republicans voted against endorsing Trump in 2016 but have endorsed him this time around.

Melania Trump also noted American citizens "condemn those who bully and intimidate people," though her husband has spent much of his presidency doing just that, especially on Twitter. And in recent months, the President has mocked and name-called members of the media as well as Democratic candidate Joe Biden for practicing social distancing and wearing masks, as the coronavirus pandemic continues to claim lives.