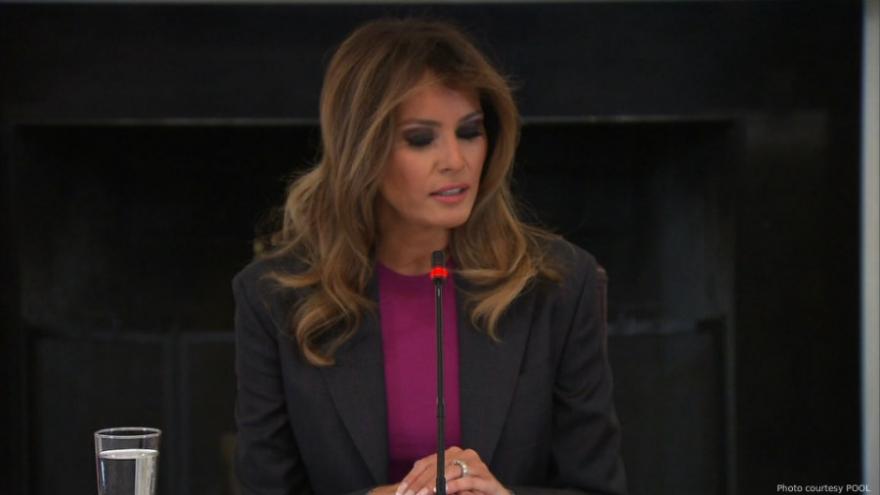 While Trump has since September of last year said she plans to focus her efforts on the well-being of children, she had yet to define what exactly that means, instead delving into a broad range of topics under a wide umbrella of issues.

That changes with a planned Rose Garden announcement, her first speech from that historic location on the West Wing side of the White House, feet from the Oval Office.

However, Trump willnot land on just oneissue affecting children, instead expanding the platform to include other keynote causes. Her spokeswoman Stephanie Grisham tells CNN Trump's approach will be a multi-pronged.

"As has been evidenced by the many events Mrs. Trump has participated in during her time as first lady, her focus will be the overall well-being of children. Something unique though: She has not narrowed her platform down to just one topic as has been done in the past," Grisham said. "Mrs. Trump wishes to help the next generation by creating change through awareness on a variety of issues that affect children."

The role of first lady, in terms of having a formal, branded platform, is somewhat undefined.

Most modern wives of presidents have opted to choose one standout point of interest and use their elevated status to promote or encourage behavior.

For Trump, who didn't move to the White House full-time until June of last year, settling on a definitive initiative has taken a relatively longer amount of time compared to some of her recent predecessors.

Michelle Obama unveiled "Let's Move" in February 2010 -- 11 months into her tenure. And Laura Bush, who debuted "Ready to Read, Ready to Learn," her program to promote early education and literacy, in July of her first year as first lady.

Variety has already been the approach in recent months; Trump's public events have touched on everything from helping children combat negativity, to dealing with the effects of opioid abuse on newborns and being nice while using social media.

Trump has visited children's hospitals, both here and abroad, and she has also visited schools, including one in Michigan last October, where she encouraged middle schoolers to practice understanding and self-confidence.

"I always believe that you need to treat each other with respect and kindness and compassion, but also stay true to yourself. Just listen to your heart, but be yourself," Trump told the children.

As recently as last month, the first lady hosted a smaller group of 12 kids at the White House for a listening session about the emotional issues they face in their lives, both at home and in school.

"Thank you in advance for sharing your stories and your thoughts about your struggles and triumphs. I want to help children everywhere be their best, so with your help, we can achieve positive results," the first lady said, before asking the children to go around and introduce themselves and tell her their favorite hobbies.

And in March, Trump convened a group of leaders from various tech companies, including Twitter, Facebook, Google and Snaphat, to talk about children and internet safety, including cyberbullying and positivity in social media.

During that meeting, the first lady appeared to indirectly address the elephant in the room: her husband's frequent use of name-calling in his tweets. Trump acknowledged for the first time her intention to move forward with the topic, despite what could be perceived as hypocrisy.

"I am well aware that people are skeptical of me discussing this topic," said Trump. "I have been criticized for my commitment to tackling this issue and I know that will continue. But it will not stop me from doing what I know is right."