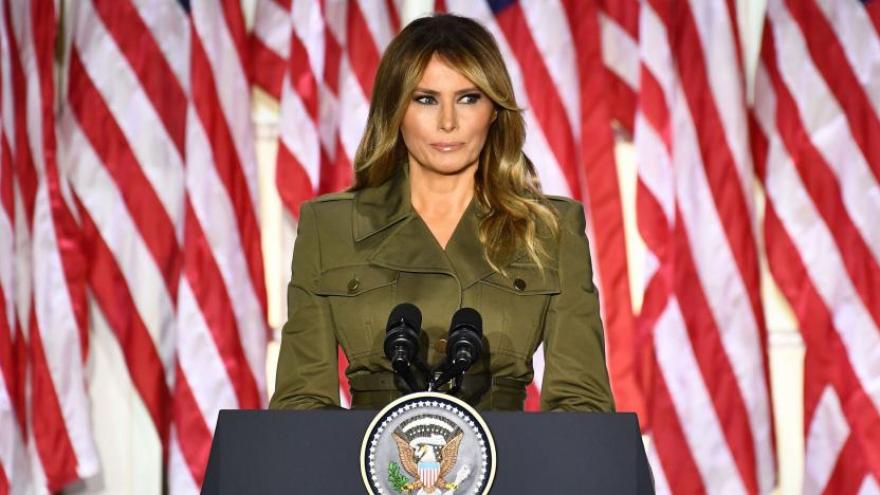 US First Lady Melania Trump addresses the Republican Convention during its second day from the Rose Garden of the White House August 25, 2020, in Washington, DC.

"Melania was never working on policy, no excuses. But again, a very difficult road to go down with as far as what the White House was willing to open her avenue to participate," Wolkoff told CNN's Alisyn Camerota on "New Day" Wednesday.

A first lady is not a federal employee and not subject to the same law as those working for the President or vice president restricting the use of a personal email account to conduct official government business. However, Trump's reported use of private email accounts came after her husband, President Donald Trump, railed against Hillary Clinton for her use of a private email server -- instead of a government email account -- during her time as secretary of state, and made it a central part of his campaign against her in the 2016 election.

Asked by CNN why Trump would use a private email after her husband's attacks against Clinton, Wolkoff said Wednesday, "Does it really surprise you? ... I think the Trumps are the Trumps. And they do whatever they want to do and they go by their own rules. It's unfortunate."

Wolkoff also told CNN that she and Trump corresponded on private email accounts because Wolkoff lacked access to a White House email account for the first month.

Wolkoff's claims about the first lady's use of a personal email was first reported by The Washington Post.

The Post reported Tuesday that it viewed messages that appeared to be from Trump discussing government hires and contracts, the Trumps' schedules for the Israeli and Japanese state visits, the first lady's "Be Best" initiative, the White House Easter egg roll, and the presidential inauguration finances.

Wolkoff did not mention Melania's private email use in her new book "Melania and Me," out Tuesday, in which she also details the allegedly contentious relationship between Melania and first daughter Ivanka Trump.

CNN has reached out to the East Wing for comment.

The first lady's spokeswoman Stephanie Grisham previously told CNN that Wolkoff's book was "not truthful" and said Wolkoff overstated her friendship with Trump.

"This book is not only wildly self-aggrandizing, it's just not truthful. It is an exercise in bizarre twisting of the truth and misguided blame for the sake of self-pity. It's unfortunate and concerning that she's overstated their friendship and her very brief role in the White House to this degree," Grisham said.

Wolkoff, a former director of special events for Vogue magazine, helped organize events around Trump's inauguration and was Melania Trump's first hire in the East Wing, briefly working as an unpaid special government employee. But as investigations into inaugural activities progressed, the $26 million Wolkoff's firm was paid, nearly all but $1.6 million of which went to subcontractors, caused a rift with the Trump family.