Melissa Lucio's execution was halted days before she was to be put to death. Here's what we know 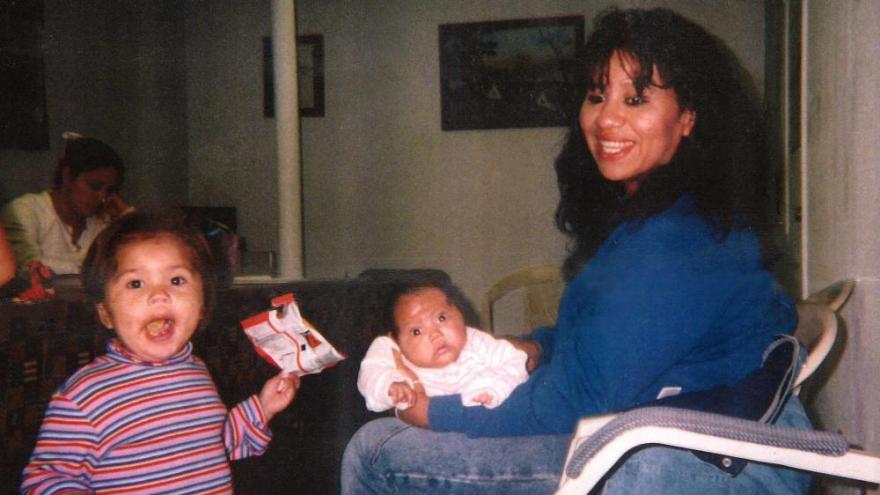 In this undated photograph, Texas death row inmate Melissa Lucio is holding her daughter Mariah, while one of her other daughters, Adriana, stands next to them.

(CNN) -- Just two days before Melissa Lucio was scheduled to be to be put to death, a Texas court on Monday halted her execution and sent her case back for review.

Lucio, a mother of 14, has been on Texas' death row since 2008, when she was convicted in the murder of her 2-year-old daughter the prior year. But she, her family and attorneys say she is innocent and was wrongfully convicted of capital murder.

Prosecutors at trial argued Lucio, now 53, was an abusive mother who caused the injuries that led to her daughter Mariah's death. Lucio's attorneys say those injuries were actually the result of a fall down stairs outside the family's apartment.

Here's what we know:

What happened this week

On Monday, the Texas Court of Criminal Appeals issued a stay of execution, indefinitely delaying Lucio's execution and ordering her trial court to review several claims of relief her team had highlighted, including her assertion that she is innocent.

The news was celebrated by Lucio, her attorneys and her family, including her son Bobby Alvarez, who told reporters he and his siblings were trying to decide what to do for Mother's Day.

Lucio learned of the stay from Texas state Rep. Jeff Leach, who -- along with a bipartisan majority of the state legislature -- has championed her case, calling for clemency or a new trial.

Lucio sobbed Monday upon hearing the news she would not be put to death Wednesday, according to an audio recording obtained by CNN.

"I am grateful the Court has given me the chance to live and prove my innocence," Lucio said in a statement. "Mariah is in my heart today and always."

Separately, all eyes on Monday had been on the Texas Board of Pardons and Paroles, which had been expected to vote on a recommendation for clemency in Lucio's case. But minutes before the board's decision was anticipated, the Texas Court of Criminal Appeals issued its ruling.

The Board then announced it would not vote at that time.

Monday's ruling followed months of work by Lucio's attorneys, including those from the Innocence Project, and mounting calls for mercy. Aside from Texas legislators and the celebrity Kim Kardashian, Lucio's arguments were also enough to convince at least five of her jurors to come forward publicly to call for her execution to be stopped and for a new trial based on evidence they never heard.

The appeals court order sends Lucio's case back to her trial court in the 138th Judicial District in Cameron County, along the border with Mexico at Texas's southernmost tip.

The appeals court remanded, or sent back, several claims Lucio raised in an application for a writ of habeas corpus -- which demands a public official show a valid reason for a person's detention -- and ordered the trial court to conduct a "merits' review."

The trial court in Brownsville will hold proceedings to hear the evidence of Lucio's innocence, Tivon Schardl, one of Lucio's attorneys and the chief of the federal public defender's capital habeas unit in the Western District of Texas, said in a news conference Monday.

After reviewing her claims and the evidence, the court would then make a recommendation to the Texas Court of Criminal Appeals, which would ultimately decide whether Lucio gets a new trial.

It's unclear how long the process could take. "We certainly want Melissa to get her hearing as quickly as possible," Schardl said. "We can't say exactly how long, but we certainly don't want her to spend one day longer in prison than is absolutely necessary."

As the process unfolds, she will remain on death row, her legal team said.

The claims the court will review

Lucio and her team had raised nine claims with the appeals court, four of which were remanded to the trial court. Lucio's other claims did not meet statutory requirements, the appeals court found, and will not be reviewed.

• The first claim argues no juror would have convicted Lucio if prosecutors had not presented false, misleading and scientifically invalid testimony by experts. That includes the medical examiner who Lucio's application says conducted Mariah's autopsy, "ignored indications that Mariah's fatal condition had another cause," and testified the injuries could only have been caused by abuse without exploring the fall down the stairs two days before.

• The second claim says new scientific evidence would prevent Lucio's conviction. Among their arguments is that Lucio was particularly prone to providing a false confession as a lifelong survivor of sexual abuse and domestic violence.

• The third claim by Lucio's attorneys says that scientific evidence shows Mariah was not murdered. As a result, they argue, in part, executing her would violate constitutional guarantees of a right to protection from cruel and unusual punishment.

• The fourth claim argues the state suppressed evidence favorable to her defense, violating her rights to due process. Among the suppressed evidence, her attorneys say, are indications police and prosecutors knew other family members were aware of Mariah's fall down the stairs and that no one had described the abuse Mariah allegedly suffered.

She still could be executed

Yes, the ruling by the appeals court does nothing to modify Lucio's sentence. And despite Monday's stay of execution, she remains on death row, Vanessa Potkin, director of special litigation at the Innocence Project, said in a news conference Monday.

The ruling, however, does delay Lucio's execution "indefinitely," Potkin said, while Lucio gets her first opportunity to present new evidence of her innocence claim in court.

"The end result could be that she could obtain a new trial," Potkin said, "and we're confident ... if Melissa was retried today that she would be acquitted."