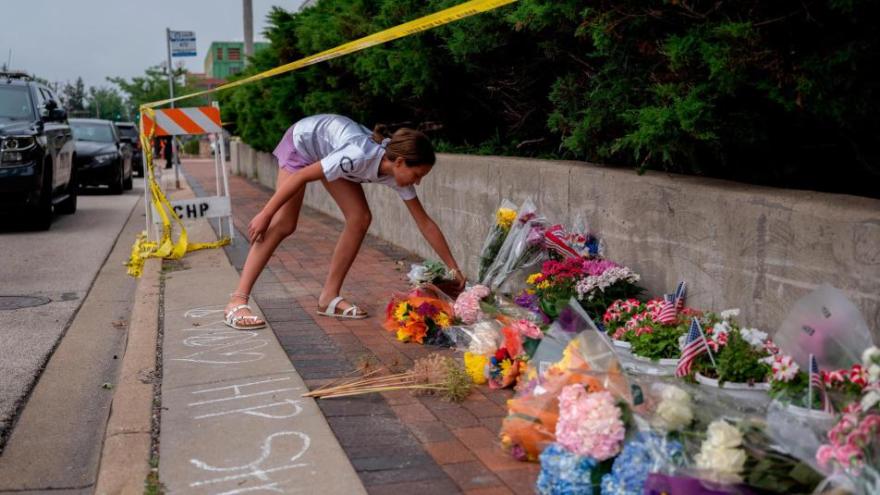 A mourner visits a memorial for the victims of a mass shooting at a Fourth of July parade, in Highland Park, Illinois.

(CNN) -- Days after a gunman killed seven and wounded dozens more in a rampage at a Fourth of July parade in Highland Park, Illinois, the shooter's father told the New York Post he wants his son to serve a long prison sentence.

Yellow barricade tape stretched down the sidewalks along Central Avenue, the main route for the Fourth of July parade that was shattered by gunfire. Authorities said the gunman fired a semi-automatic rifle from a business rooftop at crowds below before fleeing the scene.

Robert E. Crimo III, 21, who was arrested later Monday in connection with the shooting in suburban Chicago, admitted to authorities he was the gunman, prosecutors alleged Wednesday during a court hearing where a judge denied Crimo bond.

He faces seven counts of first-degree murder and a sentence of life in prison, if convicted. Illinois abolished capital punishment in 2011.

"I want a long sentence," the suspect's father, Robert Crimo Jr., said, according to a report by the Post. "That's life. You know you have consequences for actions. He made a choice. He didn't have to do that."

Crimo will face additional charges for those he wounded, along with the murder charges already filed, Lake County State's Attorney Eric Rinehart said. "It's vital to the healing of this community that every single victim receives justice," Rinehart told CNN's Wolf Blitzer on Wednesday.

Also revealed publicly Wednesday: After the shooting, Crimo drove to Wisconsin's capital of Madison on Monday and contemplated a shooting there before deciding against it, authorities said. That might have been one of two narrowly avoided mass gun attacks at July Fourth celebrations nationwide. Police in Virginia say a tip may have foiled a separate attack plot, unrelated to Crimo, in Richmond.

In Highland Park, residents have been paying their respects in the days following the shooting to those killed or wounded, with some overcome with emotion, others kneeling in prayer.

Hundreds gathered at a candlelight vigil Wednesday night at nearby Everts Park, where a multitude of orange ribbons -- signifying gun violence awareness -- were seen hanging as "Amazing Grace" was played on bagpipes.

As the grieving continues, more people are coming forward to share their experiences the morning of the shooting, including Lily Wathen, who was about to begin marching in the parade when gunfire broke out. Her grandparents were sitting "right across from where the shooter" was located, she told CNN.

"Every single year of my life, we've gone to this parade, and they wanted to be there specifically so that when I passed by in the parade, I would be able to find them there," Wathen said.

Her grandfather was struck by shrapnel in his shoulder, barely missing his lungs, but doctors say he will make a full recovery, she said.

The trauma of the event, however, has "shaken a lot of people up," she said. "It's hard to say how we'll be in a year, but for right now, it's scary to even think about going back."

Two people wounded remained hospitalized at NorthShore University Health System facilities as of Wednesday afternoon and were in stable condition, according to spokesperson Jim Anthony. A total of 39 people had been treated for injuries, he said, and an 8-year-old boy was transferred to UChicago Medicine Comer Children's Hospital, which confirmed the child is in critical but stable condition.

Suspect's father thought he would use weapons at shooting range, report says

The suspect's father decided to sponsor his son's firearm owner's identification card (FOID), a document needed to buy a weapon in Illinois, because he thought his son would take the weapons to a shooting range, the New York Post reported.

"He bought everything on his own, and they're registered to him," Crimo Jr. told the Post.

"They make me like I groomed him to do all this," he said, according to the report, which comes amid questions over whether Crimo's parents could face charges. "I've been here my whole life, and I'm gonna stay here, hold my head up high, because I didn't do anything wrong."

In a separate interview with ABC News, Crimo Jr. acknowledged he "filled out the consent form to allow my son to go through the process that the Illinois State Police have in place for an individual to obtain a FOID card."

"They do background checks," he said. "Whatever that entails, I'm not exactly sure. And either you're approved or denied, and he was approved."

CNN's calls to Crimo Jr. have not been returned. Crimo Jr.'s attorney, Steve Greenberg, told CNN they would not be making any further public comments, "but the parents will continue to speak with law-enforcement and to assist them."

Rinehart, the county state's attorney, told CNN on Thursday there is no criminal liability for sponsoring someone's FOID, but added the office is still going through evidence "in terms of who knew what when."

"There's different ways to look at potential criminal liability in this case," Rinehart said. "There's not a, per se, violation of law if you vouch for somebody in a FOID card and they end up doing something terrible like this. But, having said that, we are continuing to investigate the case and continuing to explore all options."

In addition to wanting to see his son serve a long sentence, Crimo Jr. told the Post he is "furious" over his alleged actions, adding that the night before the shooting, the two discussed a 22-year-old Danish man suspected of shooting and killing three people at a mall outside Copenhagen on Sunday.

"He goes, 'Yeah, that guy is an idiot.' That's what he said!" Crimo Jr. recalled, saying his son added, "People like that ... (commit mass shootings) to amp up the people that want to ban all guns."

"I talked to him 13 hours before (Monday's massacre). That's why I guess I'm in such shock. ... Like, did he have a psychiatric break or something?" Crimo Jr. said, per the Post.

The suspected shooter's uncle, Paul Crimo, told CNN on Thursday that his nephew "showed no aggression towards me or nothing."

"There's no indications of nothing, that I saw, that would lead to all this," he told CNN. The uncle added that he did not know where his nephew got the money to pay for the guns he purchased and said he had no knowledge of them.

"He lives in the back apartment, we don't see each other," he said.

"I'm sorry, I mean, from the bottom of my heart, I mean, I'm devastated and my heart, my thoughts and prayers goes out to all the victims, the families and everybody that got hurt, the community, everybody," the uncle added.

The firearm believed to have been used in the shooting was recovered near the scene, but Crimo had another gun in his vehicle during his arrest, police said. That weapon was a Kel-Tec rifle, Covelli said Wednesday. Crimo had approximately 60 rounds of ammunition in his car at the time, Covelli added.

When Crimo located another celebration in the Madison area, he "seriously contemplated using the firearm he had in his vehicle to commit another shooting," Covelli said, though "indications are that he hadn't put enough thought and research into it."

The FBI alerted Madison police Monday afternoon that Crimo was on the run and may be in the area, Madison Police Chief Shon Barnes said Wednesday. "We feel for the grieving families in Highland Park and all those forever impacted by the events of Monday's shooting. We recognize tragedy very well could have taken place in our own community," said Barnes.

After he was detained Monday evening in northern Illinois, Crimo "went into details about what he had done; he admitted to what he had done" in voluntary statements during questioning to Highland Park police, Covelli said.

Crimo was appointed a public defender and is due in court again July 28.

Covelli declined to address the suspect's motive Wednesday, telling reporters he didn't want to go into specific details about what Crimo told investigators.

"However, he had some type of affinity towards the numbers 4 and 7, and the inverse was 7/4," Covelli said, referring to Monday's date, July 4. Crimo's affinity "comes from music that he's interested in," said Covelli.

Crimo had purchased weapons in Illinois despite two encounters with police in 2019 over fears for his safety and that of others, information released by state and local police shows.

Highland Park police received a report in April 2019 that Crimo had earlier attempted suicide, Covelli said Tuesday. Police spoke with Crimo and his parents and the matter was handled by mental health professionals, he said.

In September that year, a relative reported Crimo threatened family members -- to "kill everyone" -- and had a collection of knives, Covelli said. Police removed 16 knives, a dagger and a sword from their home.

The knives were "just a collection," Crimo Jr. told the Post. "You know, I used to collect coins and baseball cards."

Highland Park police submitted a "Clear and Present Danger" report about the visit to the Illinois State Police, the state agency said. Family members were not willing to file additional complaints, the state police said in a Tuesday news release.

The knives confiscated by Highland Park police were returned the same day after Crimo's father said they were his, the state police said.

Crimo's application for a FOID card -- sponsored by his father because his son was under 21 -- was not denied because there was "insufficient basis to establish a clear and present danger" at the time, state police said.

Rinehart, the Lake County state's attorney, declined to comment Wednesday on whether Crimo's father or other relatives could face charges.

Parents of accused shooters historically haven't been charged in mass shootings until recently -- as in the case of a 15-year-old accused of killing four fellow students at a Michigan high school in November, CNN legal analyst Areva Martin said.

Michigan prosecutors say the negligence of parents Jennifer and James Crumbley allowed their son, Ethan, access to the weapon used in that mass shooting. Each has pleaded not guilty to four counts of involuntary manslaughter.

Illinois prosecutors would have to establish reasonable foreseeability if they want to prosecute Crimo's father, Martin said.

"The question this prosecutor's going to have to ask (is) was it reasonably foreseeable that someone who had made a suicide attempt and who had threatened to kill others would lead that person ... to commit the crime against the paradegoers," she said.

"And if the answer to that question is yes ... there definitely could be manslaughter charges filed against his dad, who did sign that consent form and gave consent for him to gain access to the high-powered weapon and weapons that were used."