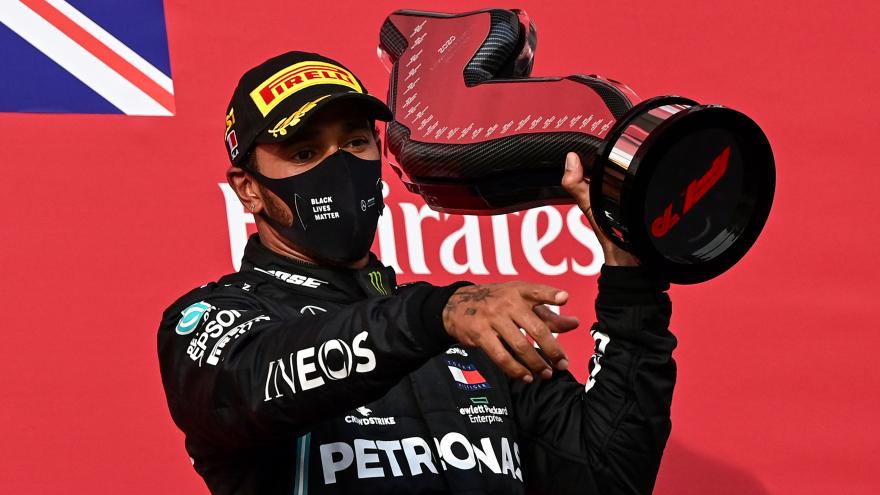 Originally Published: 01 NOV 20 09:37 ET
By Ben Church, CNN
(CNN) -- Mercedes has won the Constructors' Championship for a record seventh consecutive time after yet more success at the Emilia Romagna GP on Sunday.

Drivers Lewis Hamilton and Valtteri Bottas finished first and second at Imola to clinch the historic victory for their team.

Mercedes had previously shared the record with Italian team Ferrari, which had won six straight titles between 1998 and 2004 when Michael Schumacher was at his dominant best.

Mercedes' strong showing has been led by Hamilton, who is now on the brink of personally securing his own seventh world title.

The Briton, who won his 93rd race of his career, can finish the job at the Turkish Grand Prix on November 15.

"What an incredible achievement for all of you. I'm so proud of everybody," Hamilton said over the team radio after crossing the finish line, before embracing team principle, Toto Wolff, in the winner's paddock.

READ: Lewis Hamilton vs. Michael Schumacher -- Who is the greatest?

Sunday's race was the third Grand Prix held in Italy this season after the calendar was amended amid the pandemic.

The track last hosted a Formula One race in 2006 but has a dark history with the sport. It was the track where Ayrton Senna and Roland Ratzenberger died after crashes in 1994.

There were no such incidents this weekend but there were plenty of flashpoints with a number of drivers suffering some bad fortune.

Red Bull's Max Verstappen, who had started third on the grid, had looked a real threat to the Mercedes duo after overtaking Hamilton at the start.

But the 23-year-old suffered a tire failure when closing down Bottas and ended up facing the wrong way on the track.

Bottas, who had started in pole position, also suffered damage to his car early on after running over some debris on the track which saw him concede the lead to his teammate.

With Verstappen and Bottas out of the picture, Hamilton was in the clear and cruised to yet another victory after recovering from a sluggish start. Renault's Daniel Ricciardo finished third.

Mercedes' Wolff was keen to recognize another phenomenal achievement for the entire team, which celebrated its seventh title in style.

"This is something to be proud of. We have a group that is just amazing together, we have stayed together and pushed the benchmark to new levels," he said.

"As long as we stay motivated and energized, I think we can push it further forward."