Pill to treat Covid-19 cuts the risk of death by half, says Merck, which will seek its emergency authorization 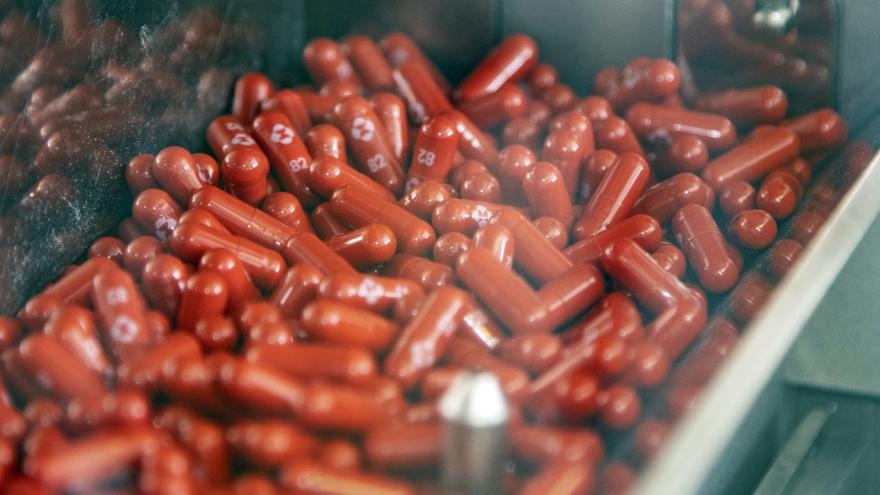 A pill has cut the risk of hospitalization or death from Covid-19 by half in a study, Merck and Ridgeback Therapeutic said Friday. This image shows Merck\'s new antiviral medication. Credit: Merck & Co./AP
By Travis Caldwell and Naomi Thomas, CNN

(CNN) -- A pill has cut the risk of hospitalization or death from Covid-19 by half in a study, Merck and Ridgeback Biotherapeutics said Friday.

It would become the first oral medicine that fights viral infection for Covid-19 if approved by the US Food and Drug Administration for emergency use authorization.

Merck said it will seek FDA emergency use authorization "as soon as possible."

Molnupiravir is not a vaccine. It is an oral antiviral, and experts have said developing such a drug could be the next chance to thwart Covid-19. A short-term regimen of daily pills would aim to fight the virus early after diagnosis and prevent symptoms from developing after exposure.

Merck has been producing doses while awaiting the study results and expects to produce 10 million by the end of the year.

One antiviral drug has been approved to treat Covid. Remdesivir is given intravenously to sick patients in the hospital. It is not meant for early, widespread use.

Some states are seeing increased vaccinations

Meanwhile, more states and health care systems are moving toward mandatory inoculations for certain workers. Officials hope the incentive of employment will eliminate hesitancy over Covid-19 vaccines -- while one governor is making contingency plans.

Connecticut Gov. Ned Lamont has instructed the National Guard to prepare in case of staffing shortages when a mandate and testing requirement go into effect at the end of Monday. State employees must provide proof of vaccination or submit to weekly tests; those who don't will be put on unpaid leave.

As of Thursday, more than 63% -- 20,000 employees -- were fully vaccinated, while 12% of employees have started weekly testing, Lamont said. More than 8,000 non-compliant employees remain, yet some 2,000 have updated their status in the last two days.

"We have provided most state employees with the option to get tested weekly instead of getting vaccinated, providing more flexibility than our neighboring states. We have also provided our employees with a compliance grace period. There is no reason all our employees should not be in compliance," Lamont said.

Connecticut is one of several states that face pushback over mandating vaccinations for critical workers. Health experts say it is necessary to protect people at a higher risk for Covid-19. But it has been met with resistance from a minority wishing to remain unvaccinated and in their current roles.

In Rhode Island, the Health Department announced in August that "all employees, interns, and volunteers in RIDOH-licensed healthcare facilities" would be required to get their first dose of the vaccine by Friday.

Care New England, one of the largest hospital systems in the state, reported Thursday that over 95% of its health care employees have been vaccinated. Staff vaccination "continues to climb by the day and the hour," said CEO James E. Fanale.

The deadline has passed in other states. California's 2 million health care workers needed to be vaccinated by Thursday or risk losing their jobs, with exemptions available for religious beliefs or qualifying medical reasons.

In New York, none of the health care facilities shut down as a result of vaccine mandates for workers, Gov. Kathy Hochul said Thursday. Earlier this week, it was reported that 92% of nursing home staff, 89% of adult care facilities staff, and 92% of hospital staff have received at least one dose statewide.

"You will see that number go higher quickly, because what we're finding is, you know, as more people are furloughed or suspended, that that number is going to go up," Hochul said.

"The bottom line is this mandate has worked," the mayor said on MSNBC's "Morning Joe." "And the goal was to protect kids, including our youngest kids who can't be vaccinated yet, and to ensure that families knew schools would be safe."

The resumption of in-person learning in schools has already been complicated by Covid-19 outbreaks and the quarantining of exposed students and staff.

Yet despite evidence that vaccinations are lowering infections and severity among eligible age groups, hesitancy remains among some parents about inoculating children 5 to 11, a survey says.

One-third of parents of 5- to 11-year-olds say that they will vaccinate their child as soon as possible, according to the Kaiser Family Foundation Vaccine Monitor on Thursday. A similar percentage, 32%, say that they will wait and see how the vaccine is working, and 24% say that they definitely won't get their kids vaccinated.

The bulk of interviews, conducted September 13 to 22 from a sample of more than 1,500 adults, were before Pfizer announced that clinical trials showed their Covid-19 vaccine was safe and generated an immune response in this age group.

The Pfizer/BioNTech vaccine is approved for people age 16 and older and has an emergency use authorization for people ages 12 to 15.

Among those already eligible for vaccines, the latest data from the US Centers for Disease Control and Prevention shows that nearly 200 million US adults have gotten at least one dose of the vaccine. Nearly 67% of US adults are fully vaccinated.

Researchers are looking at the pandemic's effects on different parts of the nation.

Correction: An earlier version of this story incorrectly identified a drug maker involved in the production of molnupiravir. It is Ridgeback Biotherapeutics.