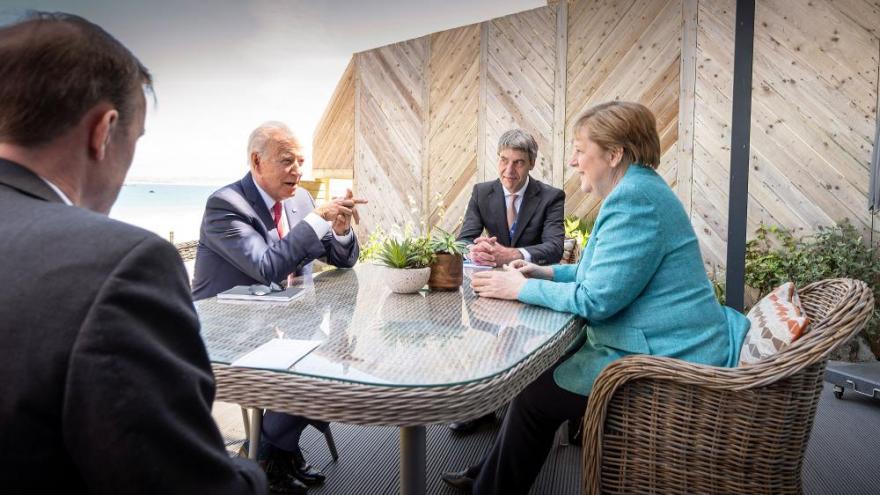 President Joe Biden and German Chancellor Angela Merkel are set to meet in Washington on July 15 in what is likely the European leader's final appearance at the White House before she steps down from her long-held position this fall.

(CNN) -- President Joe Biden and German Chancellor Angela Merkel are set to meet in Washington on Thursday in what is likely the European leader's final appearance at the White House before she steps down from her long-held position this fall.

The ongoing dispute between the United States and Germany over a Russian gas pipeline, called Nord Stream 2, is expected to play out between the two leaders in the Oval Office on Thursday, according to senior administration officials. Climate change, Covid-19 vaccines, Russian cyber attacks, Ukraine and shoring up their democracies are also topics on the agenda, an official said.

The visit comes just three months before Merkel leaves her role as chancellor of Germany in October, after having served in the position for more than 15 years. Elections to replace the "chancellor of the free world" are in September.

Biden will be the fourth US president with whom she's interacted.

Administration officials have been consistent in describing the visit as a "working" session that is forward looking, despite Merkel's limited time remaining atop the German government. But after a decade-and-a-half of visiting Washington, her final trip to meet a US president is a moment to reflect on her legacy.

Biden will "convey gratitude" for Merkel's leadership role in Europe and the world in their meeting, an official said.

Merkel starts the day with a breakfast hosted by Vice President Kamala Harris at the Naval Observatory. She will be the first foreign leader Harris has hosted at her residence since moving in.

Biden and Merkel will meet one-on-one in the Oval Office before an expanded session with aides and a concluding joint press conference. Biden and his wife will host Merkel and her husband for dinner at the White House with a "range of individuals" who have been supporters of Germany. And Merkel will also receive an honorary degree from Johns Hopkins University while in the states -- marking her 18th honorary degree so far.

Officials said the leaders will unveil a "Washington Declaration" that spells out a joint vision for cooperating on difference policy challenges, and a shared commitment to human rights and the results democratic leadership provides for the world. They will also announce other initiatives, including a "futures forum" that brings together Americans and Germans from different sectors; an economic dialogue; and a climate and energy partnership.

The meeting comes shortly after the White House recently announced Biden would nominate Amy Gutmann to serve as the US ambassador to Germany. If confirmed she would be the first woman to serve in the role.

So far, signs point to renewed warm relations between the two countries following four years of former President Donald Trump's "America First" approach to diplomacy. The approach served as a sharp departure from the Obama administration era of foreign policy -- when Merkel regarded then-President Barack Obama a "partner and friend."

But notably, Merkel has maintained that there will still be arguments between Germany and the US with Biden serving as President.

"Don't think that from tomorrow there will only be harmony between us," she told reporters a day after Biden's inauguration. "There will also be arguments about how best to do things for our two countries."

Biden and Merkel have met several times, and Thursday's White House meeting will be their second in-person encounter since Biden was sworn in.

Following the G7 summit in the UK earlier this spring, Merkel indicated that Biden brought "new momentum" to the gathering. She said being able to meet Biden was "obviously important because he stands for the commitment to multilateralism which we were missing in recent years" -- an apparent nod to Trump's approach. She's also invited the President to Germany.

Biden and Merkel have regularly interacted with one another on the world's stage since the Obama years.

While serving as vice president, Biden undertook a number of foreign policy issues as part of his portfolio, traveling to the Munich Security Conference every year and appearing alongside Merkel. At the time, Biden made known his differences with Germany over whether to send weapons to Ukraine.

Obama, meanwhile, visited Germany a half dozen times while in office -- excluding stops at Ramstein Air Force Base, a common pit stop for Air Force One during extended travel.

But despite their commonalities, Biden and Merkel still have a number of differences that will be on the table when they meet in Washington on Thursday.

The US believes the Nord Stream 2 pipeline project, which transports natural gas from Russia directly to Germany underneath the Baltic Sea, will provide Moscow undue leverage over the European energy sector. But the White House doesn't expect to reach a resolution when it's brought up Thursday.

Biden will raise his "long-standing concerns" over Nord Stream 2 with Merkel, including his desire to ensure it isn't used for coercive purposes against Ukraine, according to one official.

Instead, officials believe Biden's decision earlier this year to waive congressional sanctions on Germany has allowed "diplomatic space" for talks between the two sides, even if no resolution on the thorny issue has been found.

Matthias Matthijs, a senior fellow for Europe at the Council on Foreign Relations and an associate professor at Johns Hopkins University's School of Advanced International Studies, said it's clear that Germany "wants to move ahead with the pipeline and wants to reassure the US that this won't give (President Vladimir) Putin's Russia the opportunity to blackmail the EU."

"The Germans are hoping to get the basic go-ahead on (Nord Stream 2), a commitment from the US that it can increase its exports of Liquefied Natural Gas to Europe, and will want to avoid to get drawn into a new Cold War with China, where Berlin has its own commercial interests," he added. Matthijis also said the Germans are hoping for the US to lift its hundreds of tariffs on the European Union, but it's an area Biden is less likely to engage.

China is also likely to expose differences between the two leaders. Merkel has advocated a more cooperative approach to Beijing -- her country's most important trading partner -- even as Biden works to consolidate western support for a more confrontational approach.

Those differences played out last month at the G7 summit, though Merkel joined other European leaders in signing onto a final statement calling out China's forced labor practices.

Biden has been clear in talks with Merkel and other leaders of the need to "engage China from a position of strength," an official said -- a message he'll repeat on Thursday.

Still, the diplomatic approach by the Biden administration marks a contrast to the Trump years.

During his tenure in office, Trump hammered Germany on trade and its lack of financial contributions to NATO shared defense. He moved to withdraw nearly 12,000 troops from Germany and accused ??Germany of being beholden to Russia because it buys energy from Moscow. And he also took to personally insulting Merkel over the phone, at one point telling her that she was "stupid."

Merkel, in turn, often spoke out about Trump's rhetoric and pushed back on Trump's assertion that Germany is a captive of Russia by referencing her own upbringing in Soviet-controlled East Germany.

Merkel will be the first European leader to visit Biden at the White House. He met with Japanese Prime Minister Yoshihide Suga in April and South Korean President Moon Jae-in in May.