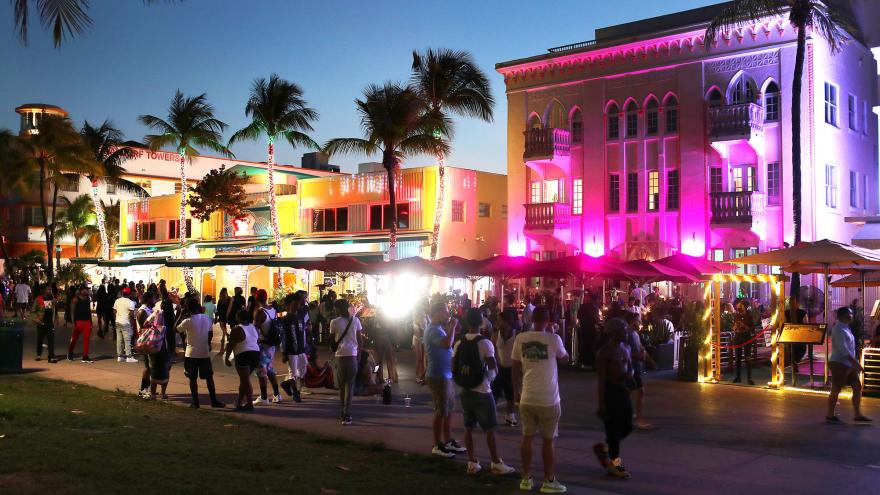 People enjoy themselves as they walk along Ocean Drive on March 18 in Miami Beach, Florida. One hotel paused food service amid the Covid-19 fears. - Joe Raedle/Getty Images

(CNN) -- Miami Beach Mayor Dan Gelber declared a state of emergency and set a curfew Saturday, saying the crowds that have descended on the city recently are "more than we can handle."

"Too many are coming, really, without the intention of following the rules, and the result has been a level of chaos and disorder that is just something more than we can endure," Gelber told CNN's Ana Cabrera.

Police in Miami Beach said early Sunday that they arrested "at least a dozen" people following the start of the curfew.

The 8 p.m. curfew and road closures in the city's entertainment district will be in effect for the next 72 hours, Gelber said at a news conference Saturday.

The causeways to Miami Beach from the mainland will be closed to non-local traffic starting at 9 p.m. for the next few nights, Gelber said.

At night, "it feels like a rock concert, wall-to-wall people over blocks and blocks," Gelber told Cabrera.

On Friday night, someone shot a weapon into the air, and there was a riot, he said.

"Other things have happened that are similarly challenging, and so it feels like a tinder, it feels like just any match could set it off," the mayor said.

The situation has worsened with each day, Gelber said, and the pandemic "makes things even more challenging."

The Clevelander South Beach, one of Miami Beach's most iconic hotels, announced Friday that it will temporarily halt its food and beverage operations due to safety concerns for its employees and patrons.

"Recently, we have grown increasingly concerned with the safety of our dedicated employees and valued customers and the ability of the City to maintain a safe environment in the surrounding area," the hotel said in a message on its website and on social media.

"Therefore, we have made the difficult decision to temporarily close the food and beverage operations" until at least March 24, hotel management said in its message.

Since February 3, officers have made more than 900 arrests in the city, "more than 300 of which were for felony offenses," the summary said. "At least 50% off those arrested reside outside of Florida."

Rodriguez told CNN on Saturday that "at least two dozen arrests" were made on Thursday, and on "Friday, at least a dozen."

Miami-Dade police have been assisting MBPD since Tuesday because of the crowds, Rodriguez said.

Florida Highway Patrol officers were also assisting with traffic control on the MacArthur and Julia Tuttle Causeways, bridges which connect the island city to the mainland, MBPD said in a tweet Friday.

Other agencies assisting with safety efforts include Coral Gables Police Department and the Miami Dade Department of Corrections, according to Rodriguez.

"If you're coming here because you've been pent up and you want to let loose, you think anything goes, please don't come here," Gelber told CNN. "We have extra police everywhere, we're going to arrest people, and we have been. We're going to keep order."

"If you're coming here to go crazy, go somewhere else. We don't want you," Gelber said.

The Clevelander said management "will re-evaluate the situation over the coming days and decide whether to re-open or remain temporarily closed."

Employees will "be paid their full salary" while the dining and bar areas are closed, the hotel said.

Correction: A previous version of this story mischaracterized the reason why the Clevelander South Beach is temporarily halting its food and beverage operations. The Clevelander is halting operations due to safety concerns for its employees and patrons.