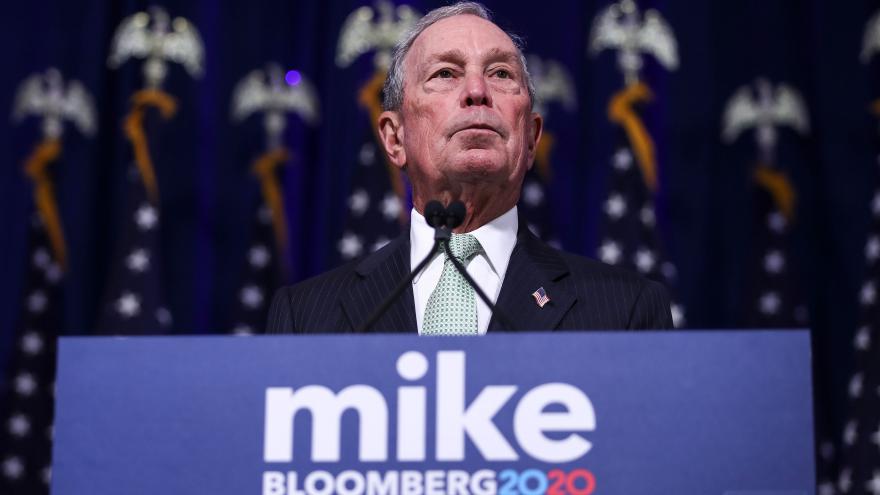 (CNN) -- Michael Bloomberg's presidential campaign now employs more than 800 people, according to multiple aides, giving the former New York mayor a nationwide effort that surpasses any other candidate in the Democratic primary.

The surge in staffers is particularly remarkable given Bloomberg entered the 2020 field less than two months ago and highlights how the billionaire businessman-turned-politician is willing to spend hundreds of millions to fund his late entry bid.

Bloomberg's campaign now includes 500 staffers in more than 30 states and 300 staffers in his New York City headquarters, an aide said. Bloomberg has staff in every Super Tuesday state, where the candidate is focusing his campaign.

"In six short weeks, Mike's campaign now has 500 staff on the ground in every Super Tuesday and even some territories, like the Virgin Islands," said Dan Kanninen, Bloomberg's states director. "Our campaign is building the most robust national organization and infrastructure to beat Donald Trump, where we will compete everywhere and take our case directly to voters across the country with person-to-person conversations."

News about the size of Bloomberg's team was first reported by NBC News.

Bloomberg's team now dwarfs what his opponents have taken the better part of a year to build. Former Vice President Joe Biden's campaign currently has more than 400 staffers, an aide said. Former South Bend Mayor Pete Buttigieg's operation has more 500 aides on staff, according to an aide.

Bloomberg's staff has grown so quickly that the team has had to move offices, said an aide to the former mayor, from the Bloomberg Philanthropies building in New York to the old New York Times building on West 43rd Street.

Bloomberg has yet to release his fourth quarter fundraising report with the Federal Election Commission. While he has said he is not accepting donations, the report would still provide the first in-depth look at how much the former mayor has spent to fund his operation. But the mayor, based on job postings, is paying top-dollar for his campaign staffers.

Some staffers, particularly field organizers, have been given a level of security largely unheard of in politics. An aide tells CNN that regardless of whether Bloomberg wins the nomination or not, some field organizers in key states have guaranteed jobs through November.

The mayor has also spent millions on television, too, blanketing the airwaves with ads looking to introduce himself to the electorate. To date, according to the media tracking field Kantar Media/CMAG, Bloomberg has spent more than $132 million on television ads.

CNN reported in December that Bloomberg's primary strategy is building an operation as if he was running in a general election, including paying top dollar to some of the most talented political strategists in the country; that includes hiring key operatives from Barack Obama's previous campaigns.