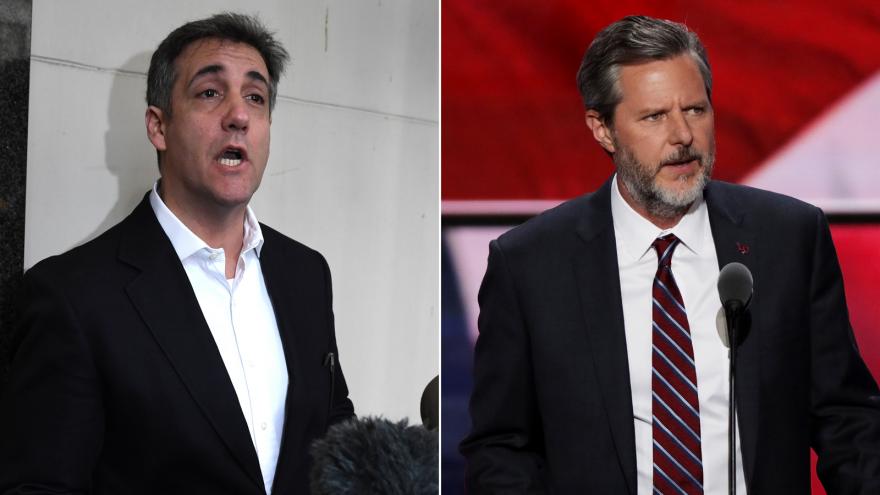 (CNN) -- The President's former fixer. A prominent evangelical couple. Allegations of blackmail and sexual indiscretions with a hotel pool attendant.

It sounds like the plot of a lurid page-turner, but this story is true -- and it just keeps getting stranger.

On Monday, Jerry Falwell Jr., one of the country's most prominent evangelicals and an ardent supporter of President Donald Trump, resigned as president of Liberty University after a series of scandals.

Falwell's resignation followed accusations by a former Miami hotel pool attendant, Giancarlo Granda, who said he had intimate relations with Falwell's wife, Becki, for years while Falwell looked on.

Now, Michael Cohen, President Trump's former personal attorney and fixer, tells CNN that he intervened to make sure revealing photos of the Falwells were not released publicly in 2015.

"These were personal photos between a husband and wife," Cohen told CNN.

Initially Cohen told CNN he confronted Granda's attorney about the photos. But later on Wednesday Cohen corrected himself.

He said he negotiated with another attorney who was representing a father and son who had sued Falwell and Granda over a land deal. The son, Jesus Fernandez Jr., later settled with Falwell.

"Jerry and Becki (were) very upset at the prospect of its (the photos') potential public release," Cohen continued.

Cohen said he and the Falwells are friends

Cohen quit working for Trump in 2018 and pleaded guilty that year to tax fraud, lying to Congress and campaign finance violations for facilitating hush money payments to two women who alleged past affairs with the President. Trump has denied having affairs with the women. Cohen was sentenced to three years in prison but was released after a year and sentenced to home confinement.

Cohen told CNN he's been friends with the Falwells for years and that his work on behalf of Falwell had nothing to do with Trump. Falwell was one of the first prominent evangelicals to back Trump's presidential campaign, at a time when most social conservatives favored other candidates.

"There is absolutely no connection between the photos and my personal request to the Falwells to assist the Trump campaign," Cohen said.

Falwell told The Washington Post that someone had stolen racy photos from his phone that showed him and his wife in their backyard.

"They weren't fully nude," Falwell said. "They were just pictures of my wife. I was proud of how she looked."

CNN has reached out to both Jerry Falwell Jr. and Becki Falwell for comment.

Earlier this week Granda told CNN the Falwells were attempting to discredit him by peddling fiction. He said the Falwells "would have you believe that I seduced Becki into an affair, without Jerry's knowledge, and then spent the intervening 7 years trying to extort them."

"Of course the truth is, they approached me. She invited me to their hotel room. They offered me an equity partnership in a property venture," he said, adding they brought him along on multiple trips and vacations.

In a statement released shortly before Granda's story became public, Falwell Jr. acknowledged the affair but said that he was "not involved." He also said he had reconciled with his wife and sought professional help.

"I am now dealing with things in a way that I should have done before," he said, "including seeking to address the emotional toll this has taken."

Falwell also said that Granda had tried to blackmail he and his wife, a charge that Granda denies.

Falwell told CNN he will receive a $10.5 million compensation package from the evangelical school: $2.5 million to be paid during the next two years and another $8 million thereafter.

As the university's president and chancellor, Falwell was paid about $1.25 million per year.

Falwell told The Washington Post his Liberty contract entitles him to the severance package because he is departing the school without being formally accused of or admitting to wrongdoing.

In recent years Falwell has been one of the country's most prominent evangelicals, with a prime perch at its most successful university. The son of the Rev. Jerry Falwell, who died in 2007, Falwell Jr. raised the school's profile -- and finances -- considerably as president.

Falwell's departure from the school came after a tumultuous 24 hours filled with conflicting reports about his fate. On Monday, the university said Falwell had agreed to resign as Liberty's president but then withdrew his resignation later that day.

This story has been updated with new information from Michael Cohen, who told CNN he misspoke in an earlier statement.