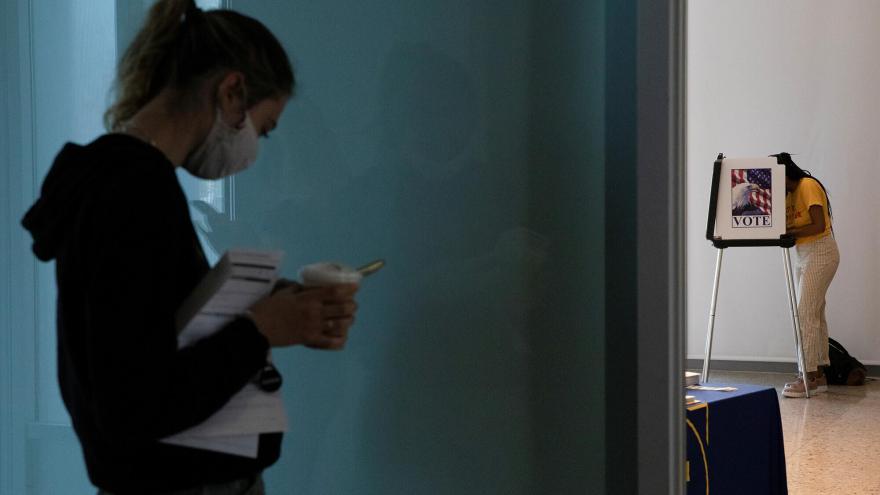 A Michigan appeals court ruled Friday that absentee ballots must be received by 8 p.m. on Election Day to count. This image shows a student waiting in line to register to vote after early voting begins in Ann Arbor, Michigan, September 24, 2020.

(CNN) -- A Michigan appeals court ruled Friday that absentee ballots must be received by 8 p.m. on Election Day to count, blocking a ruling that had extended the deadline.

Friday's ruling also reinstated some prohibitions against third-party ballot collection, which means voters can no longer designate any person of their choosing to deliver their mail ballots to election officials.

The outcome was a major victory for Republicans in a critical battleground state, and a loss for the Democratic groups that brought the original suit to ease the state's limits on mail-in voting.

The state's Republican-controlled Legislature had brought the appeal, arguing that the coronavirus pandemic and ongoing US Postal Service slowdowns weren't compelling enough reasons to extend the absentee ballot deadline or to ease restrictions on third-party ballot collection.

The appeals court overturned a sweeping September ruling that said absentee ballots postmarked by the day before Election Day must be counted if they arrive within two weeks of Election Day. While Court of Claims Judge Cynthia Stephens had found that there was "unrefuted evidence" of the pandemic affecting the mail delivery timeline, the appeals court judges said the pandemic and delivery slowdown "are not attributable to the state."

"Although those factors may complicate plaintiffs' voting process, they do not automatically amount to a loss of the right to vote absentee," wrote appellate Judges Thomas Cameron, Mark Boonstra and Michael Gadola.

The judges pointed to the nearly 1,000 drop boxes and numerous satellite voting locations made available throughout the state as further evidence that all efforts were being made to make it easier for voters to deliver their absentee ballots and an extension was not needed.

"To be sure, the pandemic has caused considerable change in our lives, but election officials have taken considerable steps to alleviate the potential effects by making no-reason absent voting easier for the 2020 election," they wrote.

The judges also sided with the GOP-controlled Legislature, which claimed that implementing stricter ballot-handling restrictions was "intended to combat voter fraud." There is no proof of widespread voter fraud in US elections, including with mail balloting.

The chairman of the Michigan Republican Party, Laura Cox, tweeted Friday night: "This is a great day for the rule of law. It's important that the rules aren't changed during an election to advantage one party over another."

The Michigan Democratic Party said in a statement Friday night that it was "disappointed" by the ruling, but it did not immediately say anything about appealing to the Michigan Supreme Court.

"Voters should not be punished for delays in the U.S. Postal Service or for unexpected emergencies that could make it a challenge for them to get to the polls on election day," the statement said.