Michigan attorney set to be first Muslim woman in Congress 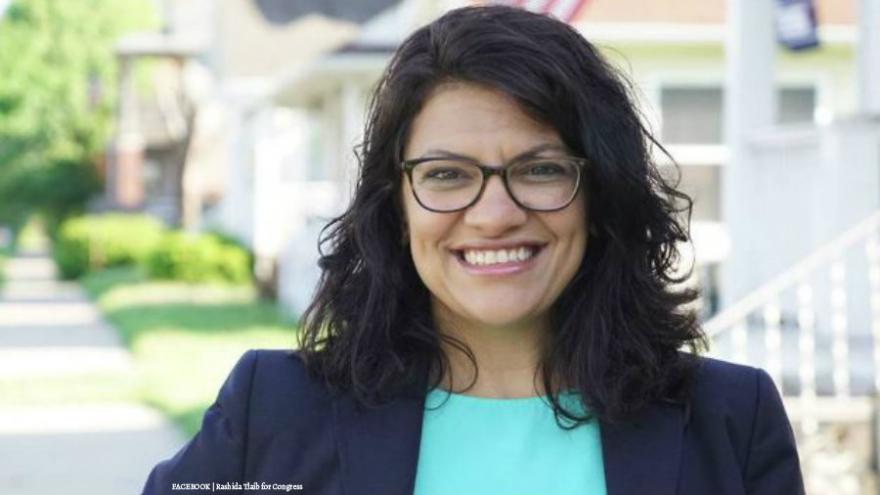 DETROIT, Mich. (AP) — Rashida Tlaib's opposition to President Donald Trump began while he was still candidate Trump and before she decided to run for Congress.

The 42-year-old attorney, who is set to become the first Muslim woman elected to Congress, was booted from a 2016 Trump campaign speech in Detroit for heckling the polarizing Republican.

After winning Tuesday's Democratic primary to run unopposed for the House seat that Rep. John Conyers held for more than five decades before retiring amid sexual harassment allegations, Tlaib, the eldest of 14 children born to Palestinian immigrants , vowed to take the fight to Trump once she's in Washington.

"I will uplift you in so many ways," she told her cheering supporters early Wednesday. "Not only through service, but fighting back against every single oppressive, racist structure that needs to be dismantled, because you deserve better than what we have today in our country."

She also challenged Trump, calling him a "bully" and adding: "I don't know if he's ready for me."

"You think of the hope and possibilities about being in America — he doesn't really believe in that," Tlaib told The Associated Press on Wednesday. "He believes there are winners and losers. (That's) dangerous and very divisive."

Tlaib, who served in the Michigan House from 2009 until 2014, defeated five other candidates to win the nomination to run for a full term representing the heavily Democratic district, which covers much of Detroit and some of its suburbs. Since no Republicans or third-party candidates are running, Tlaib is running unopposed in November's general election.

Since leaving the Legislature, Tlaib has worked as an attorney for the Sugar Law Center for Economic and Social Justice. Her views align with the Bernie Sanders wing of the Democratic Party, and on Wednesday, she said she'll push for universal Medicare, a $15 minimum wage, sustainable environmental policies, public school funding and fair immigration policies.

"Rashida Tlaib brings forward the legacy of John Conyers in terms of the groundbreaking role he played in Congress and his commitment to civil rights."

The 89-year-old Conyers was first elected to the House in 1964. He stepped down in December citing health reasons, though several former female staffers had accused him of sexual harassment. The 13th District seat has remained vacant since then.

There are currently two Muslim men in Congress: Minnesota Rep. Keith Ellison, who in 2007 became the first Muslim to take office, and Indiana Rep. Andre Carson. Ellison's decision to run for Minnesota attorney general has left his House seat open, and two of the Democrats seeking to replace him are also Muslim: Ilhan Omar, the country's first Somali-American state lawmaker, and Jamal Abdulahi, a Somali-American activist.

A congressman from western Michigan, Republican Rep. Justin Amash, is the son of a Palestinian refugee father and a Syrian immigrant mother. He is Christian.

There were as many as 90 Muslim-Americans running for national or statewide offices this election cycle. They've been spurred to action by the anti-Muslim policies and rhetoric of Trump and his supporters and are running for office in numbers not seen since before the Sept. 11 terrorist attacks, according to Muslim groups and political observers.

Among those running was Dr. Abdul El-Sayed, who hoped to become the nation's first Muslim governor. But the Sanders-backed former Detroit health director lost to Gretchen Whitmer in Tuesday's primary.

Tlaib believes that El-Sayed at the top of the ticket motivated many young Arab Americans to vote, which in turn helped her campaign.

Arabs have been coming to the U.S. in large numbers since the late 19th century, and their ranks have grown in recent decades due to wars and political instability in the Middle East. Many settled in and around New York, Los Angeles and Detroit, which has one of the country's largest Middle Eastern populations, with at least 150,000 Arabs and Chaldeans, or Iraqi Christians.

The district Tlaib will represent notably doesn't have a majority of Arabs or Muslims, and is mostly a mix of whites, blacks and Hispanics.

"Her accomplishments were recognized by the larger public," said Howell, the University of Michigan professor. "This shows that Arab and Muslim candidates in Michigan are part of the political mainstream."