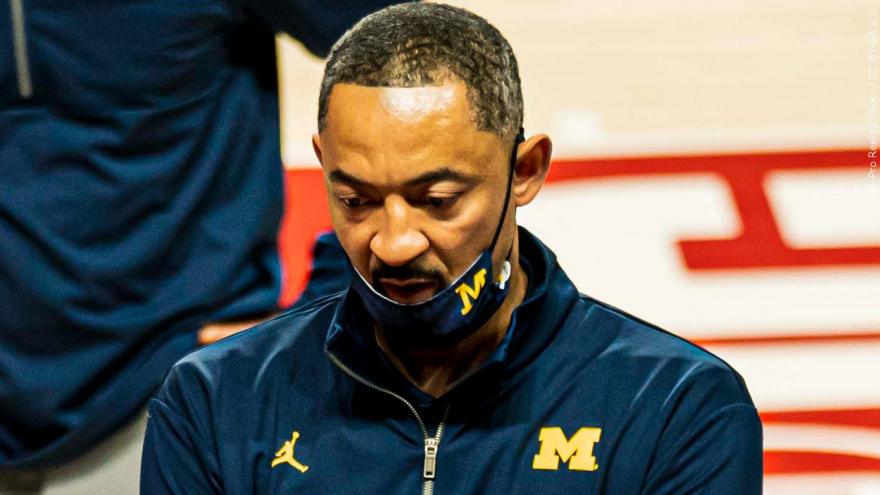 (CNN) -- Michigan head basketball coach Juwan Howard is out for the rest of the regular season after throwing a punch toward Wisconsin's coaching staff following the Wolverines' loss to the Badgers on Sunday.

The Big Ten Conference has suspended Howard for five games. Howard was also issued a $40,000 fine, the Big Ten said in a statement.

Howard threw a punch toward a member of the Badgers coaching team, which was followed by a scuffle between some players and staff on both sides.

"After taking time to reflect on all that happened, I realize how unacceptable both my actions and words were, and how they affected so many. I am truly sorry," he said.

"I am offering my sincerest apology to my players and their families, my staff, my family and the Michigan fans around the world. I would like to personally apologize to Wisconsin's Assistant Coach Joe Krabbenhoft and his family, too," Howard added.

"Lastly, I speak a lot about being a Michigan man and representing the University of Michigan with class and pride, I did not do that, nor did I set the right example in the right way for my student-athletes. I will learn from my mistake and this mistake will never happen again. No excuses!"

"Our expectation is that the incident yesterday will provide our coaches and student-athletes with the opportunity to reflect, learn and move forward in a manner that demonstrates decorum and leadership on and off of the court," Warren said in the statement.

Along with Howard's fine and suspension, Michigan forwards Terrance Williams II and Moussa Diabate were suspended for one game, effective immediately.

On the Wisconsin side, Gard was hit with a $10,000 fine, and guard Jahcobi Neath was suspended for one game, effective immediately.

How the melee unfolded

Following the Wisconsin Badgers' 77-63 defeat of the Michigan Wolverines, the two head coaches shook hands. Howard could be seen saying something to Gard.

Gard grabbed Howard with his left hand to stop the Michigan coach from moving to the next person to shake hands with, which seemed to anger Howard.

After arguing for a few moments, the two were separated before a Wisconsin assistant began shouting at Howard.

Shortly after, Howard threw a punch toward a member of the Badgers coaching team, sparking pushing and shoving between both sets of players and staff.

Gard spoke with CBS Sports on the court after the game to explain his perspective of the altercation.

"So I took a timeout and I got us a new 10 seconds and helped them get organized and get the ball in. He did not like that when he came through the handshake line, so I'll leave it at that and the tape will show the rest."

Howard addressed the incident in the postgame news conference: "I didn't like the timeout they called. I'll be totally honest, I thought it was not necessary at that moment, especially with it being a large lead ... I thought that wasn't fair to our guys.

"Basically, I addressed with the head coach that I would remember that because of that timeout," Howard said. "For someone to touch me, I think that was very uncalled for him to touch me as we were verbalizing and communicating with one another. So that's what ended up happening. That's what escalated it."

University of Michigan athletic director Warde Manuel released a statement after the game.

"I am aware of and watched the end of our men's basketball game," Manuel said. "There is no excuse for any of our staff or student-athletes to get into a physical altercation with others regardless of instigating factors.

"I reached out and apologized to Chris McIntosh and (Michigan) President (Mary Sue) Coleman has reached out to UW Chancellor (Rebecca) Blank to apologize for the totally unacceptable behavior."

CNN has reached out to the University of Wisconsin for a statement.