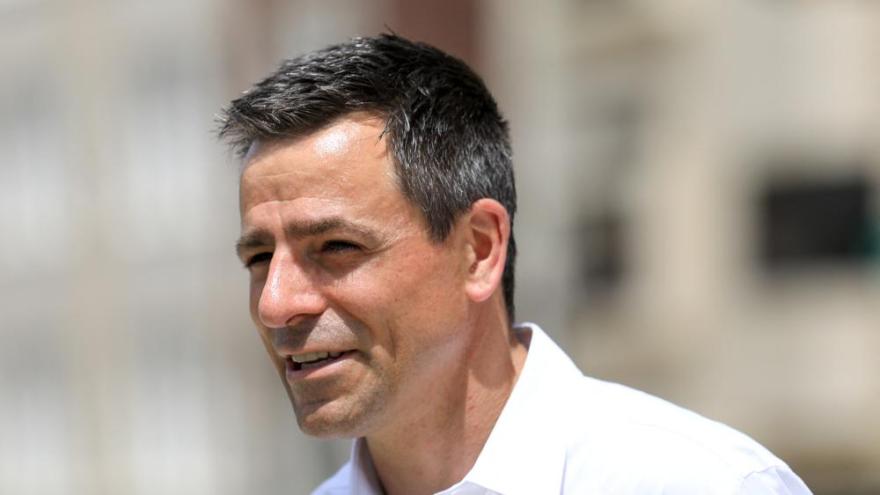 Michigan Republican gubernatorial hopeful Ryan Kelley, a day before he was set to appear in federal court on charges related to his presence at the January 6, Capitol riot, continued to spread lies about the 2020 election.

(CNN) -- Michigan Republican gubernatorial hopeful Ryan Kelley pleaded not guilty Thursday to misdemeanor charges over his alleged actions in the US Capitol riot after claiming he only engaged in "First Amendment activity" that day.

According to federal investigators, Kelley climbed up through the scaffolding for President-elect Joe Biden's inauguration stage during the attack and motioned for rioters to advance. In the weeks after the riot, the FBI received several tips identifying Kelley from photos taken that day.

His court appearance came the day after he continued to spread lies about the 2020 election and defended his appearance at the insurrection during a debate Wednesday night.

In a Republican candidates debate hosted by WOOD TV8 in Michigan, Kelley expressed no regret about his January 6 visit to Washington.

"January 6th, 2021, back when gas was under $2 a gallon -- those were good times," Kelley said when the moderator asked about the insurrection.

"I was in Washington, DC, on January 6th," Kelley continued. "Yes, the FBI did raid my house in front of my wife, in front of my children, put on this big theater show for misdemeanor charges. And it was the same day that they started their January 6th witch hunt committee that they have going on in Congress right now. But you know, that was a First Amendment activity by a majority of those people -- myself included -- we were there protesting the government because we don't like the results of the 2020 election, the process of how it happened. And we have that First Amendment right. And that's what 99% of the people were there for that day. And yes, I support President Trump."

Kelley also rehashed a variety of election conspiracies during the debate and told voters he still believes that the election in Michigan -- where Biden won by more than 154,000 votes -- was stolen.

"Yes, the 2020 election in the state of Michigan was fraudulent and it was stolen from President Trump," Kelley said.

Kelley is one of a handful of Republicans vying to take on Michigan's Democratic Gov. Gretchen Whitmer this fall.

This story has been updated with Kelley's not guilty plea.