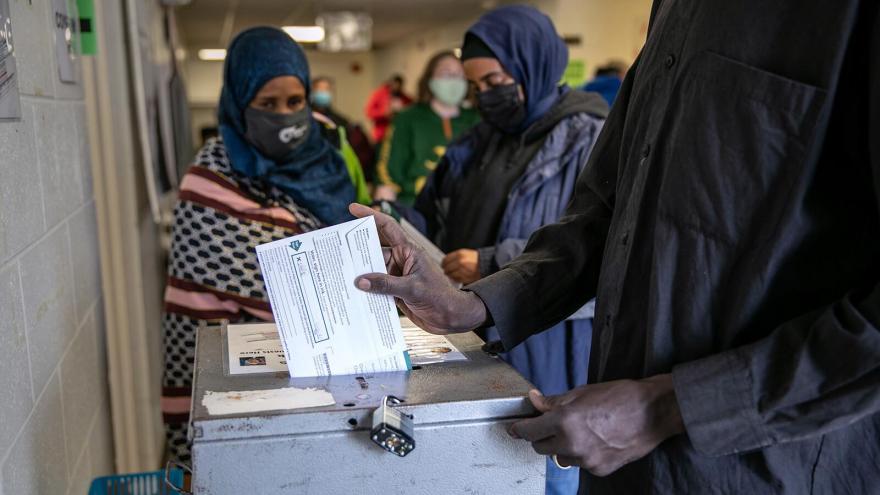 A Republican-led investigation concluded June 23 that there was "no evidence of widespread or systematic fraud" in Michigan's 2020 election, rejecting claims by former President Donald Trump and his allies that the state's election results were fraudulent.

(CNN) -- A Republican-led investigation concluded Wednesday that there was "no evidence of widespread or systematic fraud" in Michigan's 2020 election, rejecting claims by former President Donald Trump and his allies that the state's election results were fraudulent.

"There is no evidence presented at this time to prove either significant acts of fraud or that an organized, wide-scale effort to commit fraudulent activity was perpetrated in order to subvert the will of Michigan voters," the Michigan Senate Oversight Committee said in a report released Wednesday.

The report's findings refute allegations that Trump and his supporters promoted about the 2020 election process in Michigan as they sought to overturn Joe Biden's victory.

The release of the report comes after Michigan Republicans proposed bills that would overhaul the state's election laws, including proposals that would require voters to submit IDs or only be allowed to cast provisional ballots, restrict the hours that voters could drop their ballots into curbside drop-boxes, and require a driver's license or state identification numbers to request a mail-in ballot.

Republican say the bills would protect the integrity of elections -- an argument made nationwide as GOP lawmakers push for more restrictive laws -- while Democrats argue the measures are part of a GOP strategy to get fewer people to vote in the 2022 elections.

Michigan Gov. Gretchen Whitmer, a Democrat, has denounced the measures and is expected to veto the bills. But GOP officials are threatening to use a quirk of Michigan law in which they gather enough signatures in a petition drive to circumvent the governor's anticipated veto and enact the legislation.

The Senate committee, led by Republicans, debunked claims that deceased people or non-residents voted in the election, voting tabulators were compromised, ballots were harvested, ballots were "dumped" at the TCF Center in Detroit, and votes for Trump in Antrim County were switched.

According to the report, there were two cases in Wayne County where an individual appeared to have voted but was deceased. One was a clerical error in which a 118-year-old man shared an identical name with his son. The other was a 92-year-old woman who died days before the election.

Claims that people who were no longer Michigan residents but voted in the state elections also proved to be false, the committee said.

The committee said that there was no evidence that thousands of absentee voter ballots were mailed out without having been requested, adding that people who made these claims were equating absentee ballot applications with actual absentee ballots.

The committee also focused some of its most intense scrutiny on the false claims made that ballots were manipulated in Antrim County through Dominion Voting Systems. The report stated that the data "clearly and concisely shows that ideas and speculation that the Antrim County election workers or outside entities manipulated the vote by hand or electronically are indefensible."

"Further, the Committee is appalled at what can only be deduced as a willful ignorance or avoidance of this proof perpetuated by some leading such speculation," the report said.

Last year, Michigan had conducted a statewide risk-limiting audit, reaffirming the accuracy of Michigan's voting machines, including an audit of the ballots cast in Antrim County.

In compiling its Wednesday report, the Senate committee reviewed 28 hours of testimony from nearly 90 individuals, subpoenaed documents from government entities, and "countless" claims and concerns from Michiganders.

"Our clear finding is that citizens should be confident the results represent the true results of the ballots cast by the people of Michigan," the committee said in its report. "The Committee strongly recommends citizens use a critical eye and ear toward those who have pushed demonstrably false theories for their own personal gain."

While it found no evidence of widespread fraud, the committee said there are "glaring issues" and "clear weaknesses" in Michigan's elections system "that require legislative remedy."

In its report, the committee recommended that the secretary of state cease mailing out unsolicited absentee ballot applications, signature verification requirements be established, and video security be added to ballot drop boxes, among other suggestions.

The committee is also pushing for county clerks to be given more authority to help remove deceased voters from Michigan's voter registration system.

Some of the committee's recommendations are already a part of the larger legislative package intended to overhaul the state's election laws.