Michigan Gov. Whitmer says she censors herself when speaking about Trump to ensure continued federal assistance 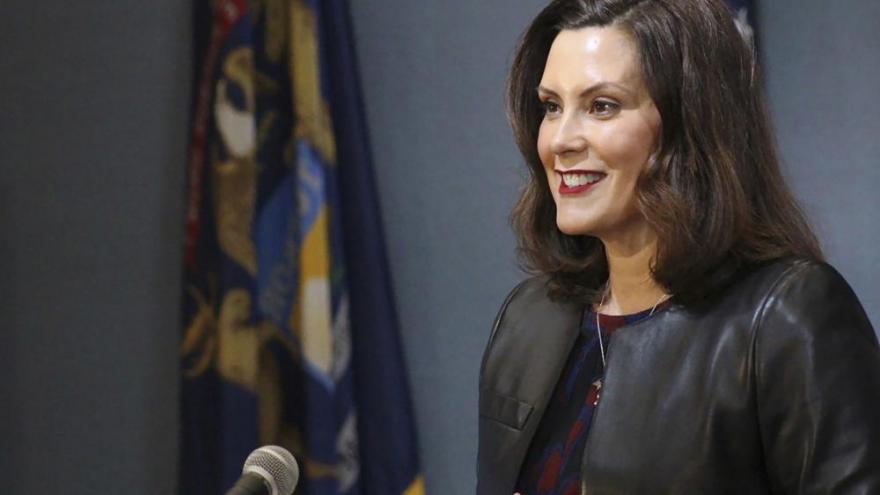 FILE - In this May 1, 2020 file photo provided by the Michigan Office of the Governor, Michigan Gov. Gretchen Whitmer addresses the state during a speech in Lansing, The state of Michigan has announced a settlement in a lawsuit over poor reading skills that was filed on behalf of Detroit schoolchildren, weeks after a federal appeals court issued a groundbreaking decision recognizing a constitutional right to education and literacy. Whitmer and the plaintiffs announced the agreement early Thursday, May 14. They say the settlement “will help secure the right of access to literacy for students in Detroit who faced obstacles they never should have faced.” (Michigan Office of the Governor via AP, Pool, File)

(CNN) -- Michigan Gov. Gretchen Whitmer said she censors herself when speaking publicly about President Donald Trump in order to ensure continued federal assistance to her state amid the coronavirus pandemic.

Asked specifically by Axios reporter Alexi McCammond during an interview on "Axios on HBO" if she self-censors her comments about the President "for the sake of continuing to receive federal assistance," Whitmer responded bluntly, "Yes."

When pressed if she has always felt that way, Whitmer offered that "the worst night sleep that I've gotten in the last 10 weeks is when he has attacked me on Twitter."

Her comments underscore the delicate balance state leaders have been forced to navigate in securing federal assistance from a President who has repeatedly lashed out at governors over their responses to the pandemic. Whitmer has faced substantial criticism from Trump and his allies as she continues to hold steady on slowly reopening the state amid growing calls to relax social distancing measures and jumpstart Michigan's economy.

As a result, she's faced repeated demonstrations against her closure orders, including at her home. Last month, protesters carrying firearms descended on Michigan's Capitol to pressure the governor to issue more relaxed measures.

But Whitmer has been outspoken in her belief that the country must listen to medical professionals.

Earlier this month she unveiled a six-phase plan that she touted as critical to avoiding a second wave of infections. "We have to reengage like a dial, not a switch that goes on or off, but a dial that we can turn," she said.

Trump sparked an uproar in recent days when he threatened to withhold federal funds from the state because, in a response to the pandemic, it sent absentee ballot applications for November's election to registered voters.

The President for years has spread lies about voter fraud in the US and has recently ratcheted up his attacks against mail-in ballots. He falsely insisted that there is "tremendous fraud involved and tremendous illegality," even though Trump himself has voted by mail in Florida.

Whitmer, who spoke on the phone with Trump Wednesday, told CBS on Thursday: "Threatening to take money away from a state that is hurting as bad as we are right now is just scary, and I think something that is unacceptable."