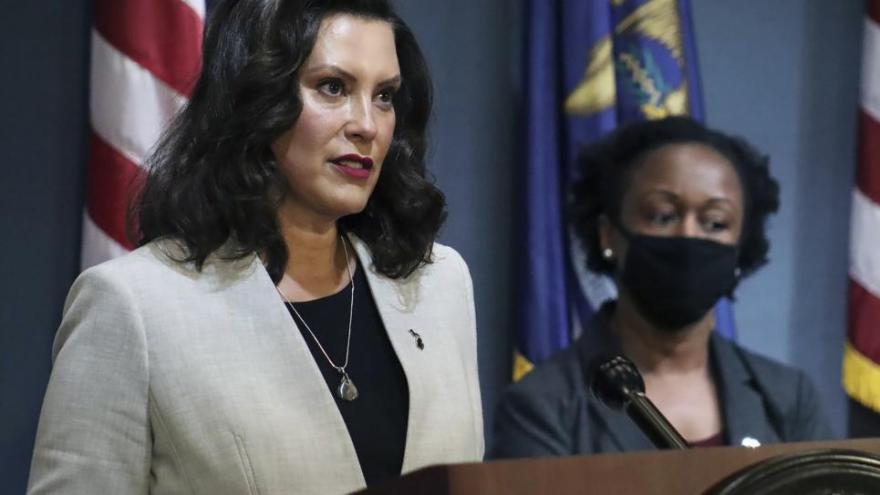 Michigan Gov. Gretchen Whitmer called for a "national mask-up campaign," saying it is necessary for everyone, even those in the White House, to wear masks to stem the spread of coronavirus as the number of cases surge across the US.

(CNN) -- Michigan Gov. Gretchen Whitmer on Tuesday called for a "national mask-up campaign," saying it is necessary for everyone, even those in the White House, to wear masks to stem the spread of coronavirus as the number of cases surge across the US.

"It's incumbent on every one of us to mask-up, from the White House, to the state house, everywhere in between," Whitmer said. "We are seeing this play out across the country. We have to do our part to make sure that doesn't happen."

The Democrat is the latest elected official to call for a nationwide push on mask-wearing amid a nationwide surge of the virus. New Jersey Democratic Gov. Phil Murphy said during an interview with NBC's "Meet The Press" on Sunday that wearing a mask should be a "national requirement," and even lawmakers within President Donald Trump's own party have recently stressed the importance of Americans wearing masks, though he continues to forgo them publicly and refuses to encourage his supporters to do so.

Whitmer told CNN's Alisyn Camerota on "New Day" that the measure would not only save lives but also help the struggling economy rebound from the virus' negative impact.

"I'd like a national mask-up campaign. I think that if everyone endorsed this, it's a simple cost effective thing that we could do to really mitigate spread," Whitmer said. "But the symbols that come from the very top matter and it changes behavior. If we can take the politics out of mask wearing we can save a lot of lives and in doing so save the pain, the economic pain, that we are feeling across this country."

White House officials are discussing taking a more active role in encouraging masks as they shift to a strategy of preparing Americans to live long-term with the virus. After appearing at a string of events without social distancing and where masks were scarce, Trump's campaign said Sunday it would host a New Hampshire campaign rally where attendees will be "provided a face mask that they are strongly encouraged to wear."

Trump's willingness to shift personally on the issue, though, is far from clear.

Whitmer said "mixed messaging that's happened at the federal level" could be one reason many young people seem to be ignoring public health guidance on limiting the spread of the deadly disease.

In Diamond Lake, Michigan, over the July 4 holiday weekend, a large group of maskless people were captured on video at a crowded party, despite warnings from health officials that such gatherings would likely lead to an increase in coronavirus cases.

"The fact of the matter is, every one of those people can be carrying Covid-19 and a lot of them might be without knowing it. And that's the inherent danger in this moment," Whitmer said.

There are more than 2.9 million confirmed cases of coronavirus in the US and more than 130,000 people have died, according to a Tuesday morning tally by Johns Hopkins University.