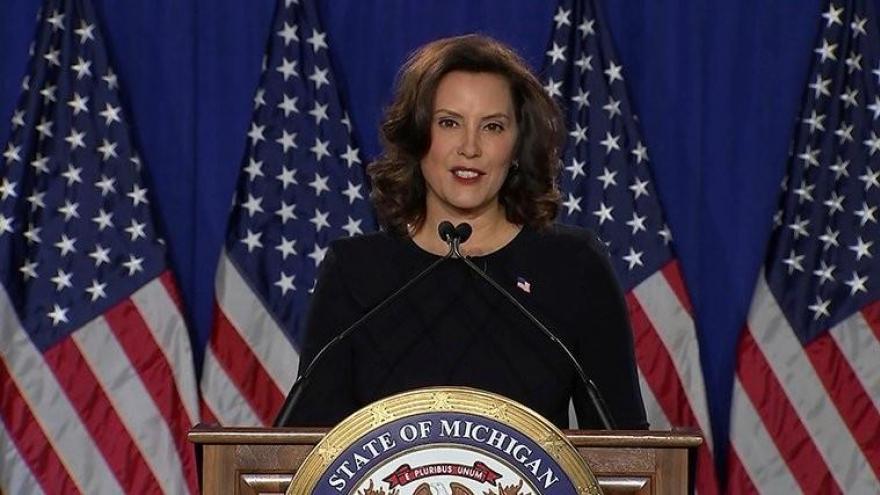 Michigan Gov. Gretchen Whitmer said in an interview Friday that her state is not getting the health and safety equipment needed to fight the spread of the novel coronavirus because contractors are sending their products to the federal government first.

(CNN) -- Michigan Gov. Gretchen Whitmer said in an interview Friday that her state is not getting the health and safety equipment needed to fight the spread of the novel coronavirus because contractors are sending their products to the federal government first.

Whitmer, a Democrat, said in an interview on CNN's "The Situation Room with Wolf Blitzer" that her state's shipments of personal protective equipment are being "canceled" or "delayed."

"Well, we've entered into a number of contracts, and as we get closer to the date when shipments are supposed to come in, they are getting canceled -- getting delayed," Whitmer told Blitzer.

Whitmer said her state was notified that shipments of protective equipment such as face masks are going "first to the federal government" ahead of the states.

"I know Michigan is not alone. I saw Gov. Charlie Baker, Republican from Massachusetts, essentially say the same thing. Same thing with Mayor Garcetti out in Los Angeles. This is an issue we are confronting as a nation, where we are bidding against one another, where we are struggling to grab every PPE (personal protective equipment) we can get our hands on," she added.

Whitmer's comments came after she said in a local radio interview earlier on Friday that the federal government has been told not to send medical supplies to Michigan.

A Federal Emergency Management Agency spokesperson noted in an email to CNN that a shipment for medical supplies from the Strategic National Stockpile was last shipped to Michigan on March 22 and contained N95 respirator face masks, surgical masks, face shields, surgical gowns and gloves.

Whitmer has been catching the ire of President Donald Trump recently as the two spar over the appropriate response to the coronavirus outbreak.

Trump publicly criticized Whitmer in a phone call Thursday with Fox News for her "lack of response" to Covid-19.

"The governor of Michigan, she's not stepping up. I don't know if she knows what's going on but all she does is sit there and blame the federal government. She doesn't get it done and we send her a lot," Trump said in the Thursday night interview.

Trump repeated his criticisms of Whitmer on Friday during the daily coronavirus press briefing.

He repeatedly referred to Whitmer as "the woman in Michigan" and said he wants the governors in the US to appreciate the work he and other federal officials are putting into fighting the outbreak. At one point, Trump said he has told Vice President Mike Pence not to call Whitmer and other governors who have been critical of the federal government.

"He calls all the governors -- I'm a different person. I say, 'Mike, don't call the governor of Washington, you're wasting your time with him. Don't call the woman in Michigan,'" Trump said, stating that he felt Whitmer and Washington Gov. Jay Inslee, another Democrat, will criticize him no matter what.

"You know what I say? If they don't treat you right, don't call. He's a different type of person. He'll call, quietly, anyway."

This week, the number of coronavirus cases in Michigan skyrocketed to nearly 3,000 from fewer than 350 a week ago.

"This is part of why I am hopeful that in addition to the Defense Production Act, that we adopt a national strategy and really focus on ramping up, especially where we see the growth so fast," Whitmer told Blitzer.