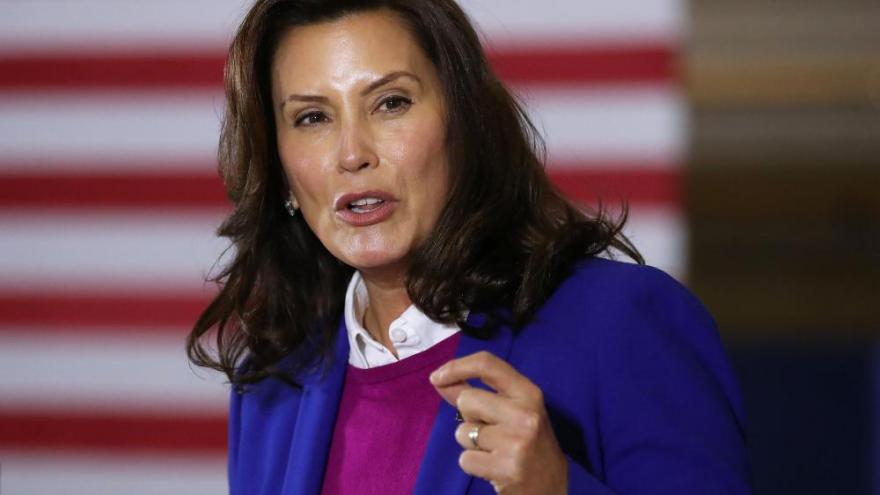 Michigan Gov. Gretchen Whitmer filed a lawsuit against several county prosecutors in her state and asked the state's Supreme Court to issue a decision on the constitutionality of abortion.

(CNN) -- Michigan Gov. Gretchen Whitmer on Thursday filed a lawsuit against several county prosecutors in her state and asked the state's Supreme Court to issue a decision on the constitutionality of abortion.

Whitmer filed the lawsuit Thursday morning in Oakland County, naming 13 elected county prosecutors located in counties with abortion clinics as defendants, according to a Whitmer official. The governor is suing to challenge the state's abortion ban, which was put in place in 1931 but is not enforced due to Roe v. Wade, according to the Whitmer official.

Her office argues that the law is unconstitutional and violates the state's due process clause that provides a right to privacy and bodily autonomy and also violates Michigan's equal protection clause. The official said if Roe v. Wade is overturned and the 1931 law goes into effect, Michigan would have one of the most extreme abortion laws in the country.

The official said the goal of the lawsuit is to obtain more clarity about what the state's Supreme Court thinks about the 1931 abortion law and the legality of abortion in Michigan ahead of Roe v. Wade potentially being struck down. The reason the county prosecutors are named as defendants is because those prosecutors would be the ones enforcing the abortion laws -- including a potential abortion ban -- and they represent counties that have abortion clinics, the official said.

"In the coming weeks, we will learn if the US Supreme Court decides to overturn Roe v. Wade. If Roe is overturned, abortion could become illegal in Michigan in nearly any circumstance -- including in cases of rape and incest -- and deprive Michigan women of the ability to make critical health care decisions for themselves," Whitmer said in a statement. "This is no longer theoretical: it is reality. That's why I am filing a lawsuit and using my executive authority to urge the Michigan Supreme Court to immediately resolve whether Michigan's state constitution protects the right to abortion."

The governor plans to use her executive authority to ask the state's Supreme Court to recognize a right to an abortion under the state's constitution. Whitmer is aiming for the court to strike down the law banning abortion in the state, which the official says could spring back into effect if Roe v. Wade is ultimately overturned by the US Supreme Court.

The moves by the Democrat, who is up for reelection in 2022, come ahead of a key US Supreme Court ruling that could significantly roll back abortion rights. The nation's highest court appears poised to uphold a Mississippi law that bans abortion after 15 weeks.

The case is seen as a direct challenge to Roe v. Wade, the landmark 1973 Supreme Court decision that legalized abortion nationwide. The court's ruling could be the most significant abortion rights ruling in decades.

If the Supreme Court upholds the Mississippi abortion law, access to abortion could be banned or restricted in many Republican-led states across the country. Abortion access could be elevated to a top campaign issue across the country just months ahead of November's midterm elections.

The Biden administration has urged the Supreme Court to uphold Roe v. Wade -- the landmark case that legalizes abortion nationwide prior to viability, which can occur at around 24 weeks of pregnancy -- and to invalidate the Mississippi law.

President Joe Biden has said his administration is "deeply committed" to a woman's right to have an abortion and that his administration would "protect and defend that right." In September, Biden blasted a Texas state law that bans abortion after as early as six weeks into pregnancy as "extreme" and said it "blatantly violates" Roe v. Wade.