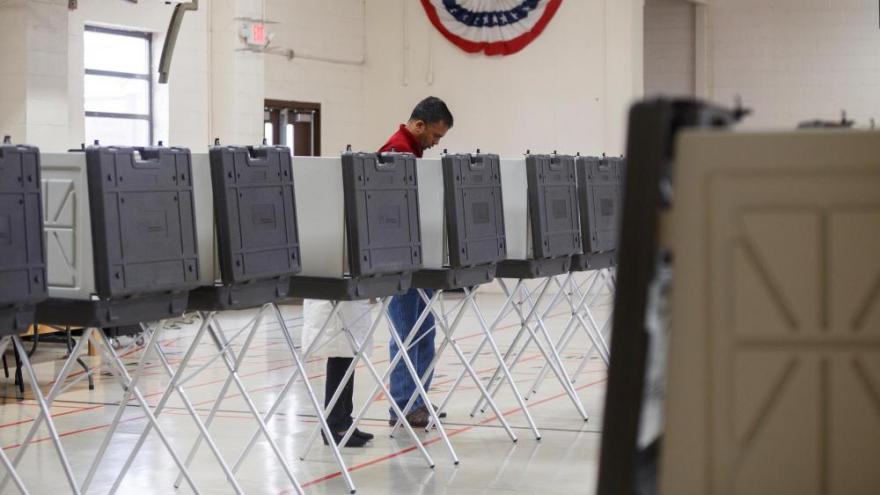 Two people vote at the Fitzgerald Recreation Center on March 10, 2020 in Warren, Michigan.

(CNN) -- The battleground state of Michigan could soon pass new laws to speed up vote-counting this November, but lawmakers are at a standstill with other election-related bills that the Democratic governor says are needed to prevent voters from getting disenfranchised.

Michigan Gov. Gretchen Whitmer and Secretary of State Jocelyn Benson, both Democrats, are urging the Republican-controlled legislature to pass laws allowing mail-in ballots to be processed before Election Day, and to extend the eligibility deadline for when mail-in ballots can arrive.

They say these adjustments are needed because of the unprecedented surge of mail-in voting, caused by the coronavirus pandemic. There are signs of growing bipartisan support to change the ballot processing rules, but several bills have stalled for months in the GOP-run legislature.

President Donald Trump won Michigan in 2016 with the narrowest vote margin in the country. The results there this year will be watched closely to see if Democratic nominee Joe Biden can break through with voters in the Midwest and flip states that were essential to Trump's victory.

The pace of vote-counting has taken on new importance this year because of the vast expansion of mail-in voting -- which is more cumbersome than in-person voting -- and due to Trump's efforts to undermine faith in the results and levy false allegations of massive fraud.

Under current Michigan law, election officials can only start processing mail-in ballots on Election Day. Processing does not mean tallying up the results. Instead, it includes signature verification and other steps that officials take to prepare the ballots to be eventually counted.

One bill that was proposed months ago and recently endorsed by Whitmer and Benson would give election officials one additional day to process mail ballots -- some much-needed breathing room, considering that some poll workers "were forced to work more than 20 hours straight" after the August primary, Whitmer and Benson wrote in a recent op-ed in the Detroit Free Press.

The bill only gives election workers one extra day, which is less than what some other states allow, but any rollback of the current rules would be an improvement, election experts say.

Michigan State Sen. Ruth Johnson, a Republican was secretary of state from 2011 to 2019, is the lead sponsor of the bill that allows ballots to be processed 10 hours before Election Day.

"Time is of the essence on that one," Johnson told CNN. "It has bipartisan support."

Her efforts got a boost when Michigan Senate Majority Leader Mike Shirkey, a Republican who controls what legislation gets called for a vote, recently said that the bill isn't dead and that he expects there will be enough bipartisan support "to do something before the general election."

Democratic State Sen. Paul Wojno, who is also a sponsor of the bill, told CNN that the bill has been scheduled for a vote three times but keeps getting delayed in the GOP-controlled Senate. He said that he and Johnson plan to meet soon with Shirkey to figure out a pathway forward.

Related proposals include another bill from Johnson that would create designated shifts for poll workers, so replacements can step in as the vote-count drags past election night. That bill passed the state Senate but hasn't been taken up by the GOP-run state House, Johnson said.

"How can you expect anybody to work 20 to 40 hours and not be tired, fatigued and make mistakes?" Johnson told CNN. "I just don't see how you're going to get good results when you work people like that."

Whitmer also argued in her op-ed that lawmakers should prevent the "disenfranchisement of Michigan voters" by extending the deadline for when mail ballots can arrive. Currently, absentee ballots only count if they arrive before the polls close on Election Day. Whitmer wants the deadline extended to include any ballots postmarked on Election Day that arrive up to two days later.

There is no indication that GOP lawmakers are warming to the postmark proposals. CNN reached out to more than a dozen Michigan Republicans but did not receive any comment.

White House press secretary Kayleigh McEnany said the White House opposes rule changes like these because they would slow down election results and could create additional chaos.

Moves like these have been highly controversial, and the Trump campaign has filed lawsuits to prevent extending deadlines in battleground states. By extending deadlines for mail-in votes, eligible ballots could still trickle in after the polls close on November 3, adding uncertainty to the statewide vote count. This would also make it harder for news networks to project a winner.

After the state's August primary, Benson announced that of the roughly 10,600 rejected ballots, more than 80% were rejected because they arrived after the deadline or because of signature verification issues. The vast majority of ballots were counted, but even a small pool of rejections can throw a race: In 2016, Trump beat Democratic nominee Hillary Clinton by 10,704 votes.

"With turnout and absentee ballot numbers expected to double or even triple in November, we could be looking at tens of thousands of Michigan citizens disenfranchised if the legislature again fails to act," Benson said in a press release after the August 4 primary election.

Michigan wouldn't be the first state to make changes like these before November. For instance, New York's Democratic Gov. Andrew Cuomo signed an executive order allowing ballots to count if they are postmarked by Election Day and arrive at election offices one week later.

Whitmer's proposed tweaks for November "would make the vote-counting process longer, but it would be easier, and it would be more accurate," said Jessica Huseman, a CNN contributor and voting rights reporter at ProPublica. "If the concern is speed, then it will not be faster. But if the concern is accuracy and maintaining the sanity of the state's election officials, it's a good call."