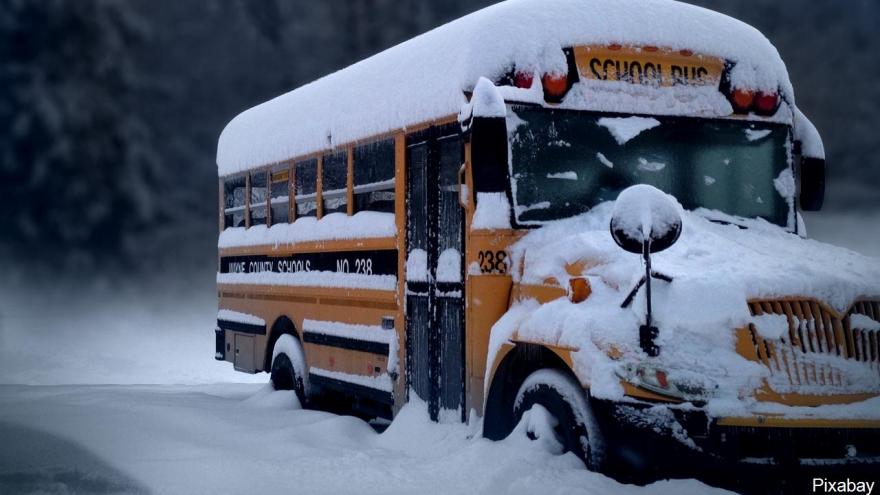 LANSING, Mich. (AP) — Michigan lawmakers are considering whether to cut schools some slack after frigid temperatures and other weather caused a high number of snow days.

State law forgives K-12 districts from making up six days that have been canceled for emergencies, and schools can get a waiver for three additional days. Some legislators from both parties say the wintry weather has been so extreme that the law should be loosened.

Many districts have already reached or exceeded nine snow days. Some are up to 15 or 16, which means their students would have at least an extra week of school in June.

Newly introduced legislation would exclude days that are canceled during state-declared emergencies from counting as snow days. If enacted, the five-day period from Jan. 28 through Feb. 1 — when an arctic deep freeze shut down many normal activities, including school — would be forgiven statewide.

"In kind of a unique situation like we have now, where it's a pretty extreme situation — the state government's closed down, things are closed down — is it reasonable to have those days count?" said Rep. Ben Frederick, an Owosso Republican who is sponsoring one of the bills.

He said he trusts that districts could still make sure that their students meet the necessary learning outcomes through the use of technology, home-based assignments and other methods.

"There may very well be a diminished return as you add days onto the school year," Frederick said, citing concerns about waning attention spans as school stretches into the summer.

"I think we have to take this as an unusual exception for this year, and then obviously going forward say, 'Is this going to continue to happen? If so, what do we do?'" he said.

Long-term options, he said, could include giving districts the flexibility to make up time on scheduled days off such as Presidents Day, for instance, or by holding longer school hours.

The state requires a minimum of 1,098 hours of instruction over 180 days.

Rep. Michele Hoitenga, a Manton Republican, said she is drafting legislation that would allow districts to choose between the 180 days or the 1,098 classroom hours, including this year.

"This gives school districts more autonomy in dealing with harsh winters like we've faced this year," Hoitenga said in a statement. "Schools should never be put in a situation where they must sacrifice the safety of their students to ensure funding from the state."

The state has granted leniency before.

In 2013, then-Gov. Rick Snyder signed legislation that let schools with too many snow days avoid having to schedule extra days that June. They were allowed to schedule longer days instead. Supporters said at the time that extra days could have been a problem for families that had scheduled vacations and camps for kids.

As of Thursday, the state Department of Education had received 175 requests for snow day waivers and had approved 77. None had been denied yet.

Spokesman Bill DiSessa said districts with too many snow days typically make up time at the end of the academic year.

"We recommend they add days, not hours, because adding time to the end of a school day doesn't promote learning among students," he said.

Democratic Gov. Gretchen Whitmer told WOOD-TV last week that she is open to forgiving snow days that occurred during the state of emergency. The fate of the legislation is uncertain, however.

Senate Majority Leader Mike Shirkey, a Clarklake Republican, is wary of wiping clear snow days. He did vote for the 2013 law that allowed for extra classroom hours.

"I feel sorry for what we're enduring from a weather standpoint this year," he said. "But I'm not really interested in taking more school days away from our kids. We're already in certain areas underperforming. They need all the school days we can get."