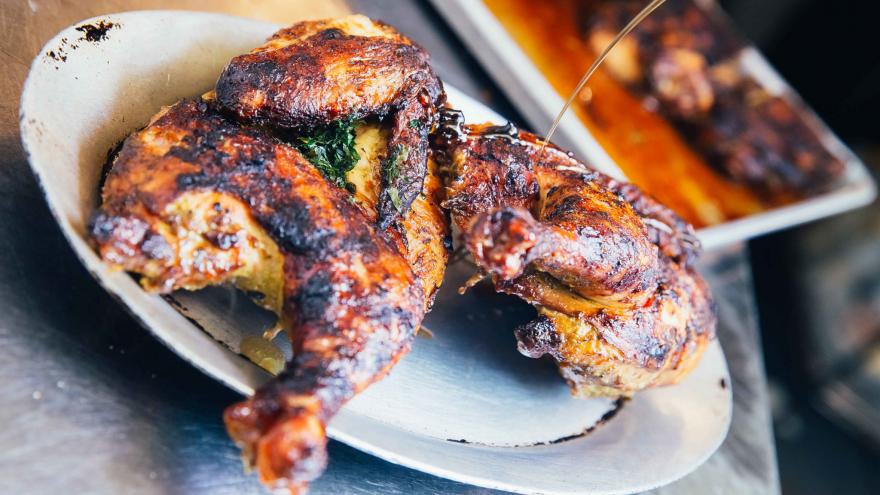 (CNN) -- Behind the headlines of poverty and grit, Detroit has sprouted a surprisingly vibrant food scene.

Then the coronavirus came, hitting the Motor City especially hard. Restaurants closed their doors, but not their hearts.

Five Detroit chefs took stock of their kitchens, pooled their perishables and started cooking up creations for the city's homeless and food-insecure.

They call their program Too Many Cooks in the Kitchen for Good, and with additional food donations, they are preparing meals for three homeless shelters.

A city of foodies who want to help

On March 21, Michigan Gov. Gretchen Whitmer ordered bars, restaurants, and other businesses to stay closed through at least April 13; it was devastating news for family-owned restaurants like Coop Caribbean Fusion.

"I think the week before we closed, the business was down 30%," chef Maxcel Hardy told CNN."To already have that valley, then a shutdown, it's really tough to bounce back from that."

His kitchen at Coop Caribbean Fusion was full of food that would spoil over time.

"I didn't want to see that product go to waste," he said.

"They were out of a job and didn't have anything but the last paycheck," he said.

But there was still plenty of food left over in his restaurant and in other commercial kitchens across Detroit.

So he linked up with four other restauranteurs to create an eclectic program. In addition to his Caribbean fusion, Too Many Cooks in the Kitchen For Good has a Thai influence from chef Genevieve Vang at Bangkok 96 Street Food. There's also a particular flavor courtesy of restauranteurs Ron Bartell at Kuzzo's Chicken and Waffles, and Stephanie Byrd of Flood's Bar and Grille and The Block. Phil Jones from the Detroit catering collective, Ma Haru, is working the phones, keeping the supply of food coming.

All of the chefs are flexing their creativity and skills to craft meals from the hodgepodge of perishable items that come their way.

"We've been fortunate enough to have donations of all different sorts of products," said Hardy.

That variety helps the chefs come up with healthy menus tailored for each of the places where their meals are served.

"As a chef, it is kind of easy for me; sometimes, I sit up at night, my creative juices just start rolling."

Meanwhile, other people are volunteering. Rudolph, the public relations man who represents this new initiative, picked up his cleaver and joined in as a sous chef.

Detroit's homeless shelters desperately need all the help the chefs can provide.

"It was definitely was a godsend to us," said Chad Audie, president of Detroit Rescue Mission Ministries.

Audie's organization runs one of the shelters with 2,000 residents served by the Too Many Cooks initiative.

The pandemic is increasing pressure on shelters as they struggle with CDC guidelines for people facing homelessness.

"We have to keep them 24/7 because we can't just let him go back to the streets," Audie told CNN.

But the food helps in many ways.

"The healthy meals are boosting the morale of the population, as well as lifting a financial burden from the mission."

"We always said we are one paycheck away from being homeless ourselves," Audie told CNN.

"But today, it's becoming a reality, and we need to help the most vulnerable population in our communities."

Chef Hardy experienced food insecurity as a child, and before opening his restaurant in Detroit, he directed the New York Community Kitchen Food Bank.

"I was responsible for overseeing a kitchen that served about 700 meals each day," he recalled. "It really kind of hit home and made me realize how important food rescue missions are."

Now, he's worried about vulnerable family restaurants and the people who rely on them for their livelihoods.

"Having a staff of twelve employees that really depend on getting a check every Friday -- to now not knowing when the next checks come in," an emotional Hardy explained, "it's been tough on me mentally."

March 29 is "National Mom-and-Pop Business Owners Day," and Hardy hopes people remember those small businesses, especially when they try to reopen after the pandemic ends.

"Show them, love, before we show the big boys love," he added.

"I would like to see everyone make a list of places that you either haven't been to or you want to visit and then go," he said.